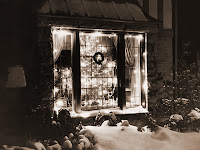 Dylan Thomas was born on 27 October 1914 in Swansea, Wales, in the UK. Astrotheme has his time of birth listed as 8.56pm - Cancer ascendant. His personal planets were a blend of Scorpio and Aquarius, in challenging square - an uneasy mix. Venus in Sagittarius, Saturn conjunct Pluto in Cancer, and Neptune at 00 Leo complete the picture. No planets in Earth signs. Unruly Uranus and addictive Neptune oppose each other and square his natal Sun.

His history of alcohol abuse may connect here, as well as to his lack of grounding Earth planets.

For all his challenges and failings, however, Dylan Thomas wrote like an angel.

At Christmas-time I love to read or listen to his story, "A Child's Christmas in Wales", a patchworked collection of his childhood Christmas memories. Read it in full HERE, or listen to him reading it, HERE. 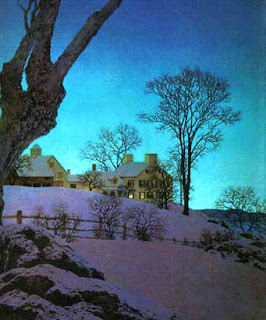 "All the Christmases roll down toward the two-tongued sea, like a cold and headlong moon bundling down the sky that was our street; and they stop at the rim of the ice-edged fish-freezing waves, and I plunge my hands in the snow and bring out whatever I can find..........."

And Dylan Thomas found his hands filled with memories, which he delights in recording in his inimitable style, after which he draws to a close so...........

"The silent one-clouded heavens drifted on to the sea. Now we were snow-blind travelers lost on the north hills, and vast dewlapped dogs, with flasks round their necks, ambled and shambled up to us, baying "Excelsior."

We returned home through the poor streets where only a few children fumbled with bare red fingers in the wheel-rutted snow and cat-called after us, their voices fading away, as we trudged uphill, into the cries of the dock birds and the hooting of ships out in the whirling bay. And then, at tea the recovered Uncles would be jolly; and the ice cake loomed in the center of the table like a marble grave. Auntie Hannah laced her tea with rum, because it was only once a year. 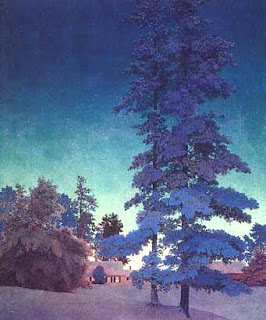 Always on Christmas night there was music. An uncle played the fiddle, a cousin sang "Cherry Ripe," and another uncle sang "Drake's Drum." It was very warm in the little house. Auntie Hannah, who had got on to the parsnip wine, sang a song about Bleeding Hearts and Death, and then another in which she said her heart was like a Bird's Nest; and then everybody laughed again; and then I went to bed. Looking through my bedroom window, out into the moonlight and the unending smoke-colored snow, I could see the lights in the windows of all the other houses on our hill and hear the music rising from them up the long, steady falling night. I turned the gas down, I got into bed. I said some words to the close and holy darkness, and then I slept." 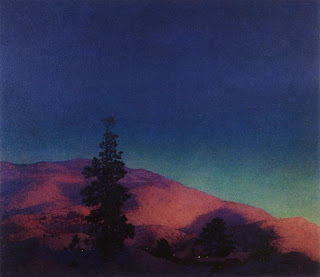 (3 Snowscape illustrations are of scenes far from Wales, but still compatible with Dylan Thomas' writing. They're by American artist/illustrator Maxfield Parrish)
Posted by Twilight at Sunday, December 23, 2007

Hey Twilight! I looooovvvveee "Child's Christmas in Wales." As a matter of fact, an Aquarius introduced me to the recording a long time ago.

It's a classic isn't it?

Happy Christmas to you and yours!