In his book, Astrology published 1964, Louis MacNeice, not an astrologer, but a poet and scholar, gathered together much of interest from a variety of sources, ancient and modern. On zodiac sign Cancer, through which the Sun now travels, he wrote the paragraphs below, quoting from a variety of professional astrologers. This extract was not copied and pasted from elsewhere, but copy-typed by my own fair fingers, by the way, with illustrations added.


In spite of its name, Cancer is a homey, motherly sign, but also perhaps the most vulnerable. It is the sign of the summer solstice, from which it will be nine months before Aries comes around again; it can therefore be regarded as a symbol of fecundation and conception. As with the other signs, Barbault makes much of its position in the year, forgetting that many other countries have their spring and summer at different times from his. But on the symbolism of this sign and the psychology of Cancer people, he is at his most eloquent and suggestive. Because it is a cardinal sign and the first of the watery signs, he treats it as symbolizing the primal water - les eaux-mères - in the same way that Aries symbolizes the primal fire. It therefore stands for our ancestral origins, all organic life being assumed to have begun in the waters. It also stands, like the sea, for both intuition and introversion. It is the one and only sign ruled by the Moon, so Cancerian qualities are very much the same as the lunar qualities. The Moon, it will be remembered, is Our Lady of the Waters.

In accordance with this watery character, Barbault says that the Cancer type tends to be un végétatif. [Huh?] And the Cancer man (it is easier to be a Cancer woman and work it out in motherhood and the home) is often unduly feminine; as Pearce puts it, "effeminate in constitution and disposition". Cancer people can easily become "drowned in their own insecurity": They are over-emotional and sub-active. But there is another side to the picture. In its earlier pictorial representations Cancer was drawn as a crayfish, a creature that can give one a terrible nip. And even crabs, however soft inside, have a very hard shell and are difficult to dislodge from their chosen crannies. So throughout the centuries this sign has stood for tenacity. Not only of purpose but also for tenacity of memory - especially memory of childhood. Which brings us around to the home again. "Cherchez la mère", writes Barbault "et vous trouverez le Cancer!"

This sign, however, stands for not only motherly people but mother-fixated people. Being extremely sensitive, it is in fact a sign of many colors and moods. Many astrologers consider that it makes excellent teachers (or actresses) and in it Barbault distinguishes what appear on the surface to be two quite different types: the stay-at-home, sufficient-unto-the-day type and the explorative, castles-in-the-air type. (Actually, he would not claim that these are more than subtypes.)

Earlier astrologers laid less stress on the profundities and sensitivities of this sign and more on its crab nature. According to Varley, Cancer tends to give "a crabbed, short-nosed class of persons, greatly resembling a crab in features, when viewed in front; these people resemble crabs, also, in the energy and tenacity with which they attack any object." And in spite of his shy and retiring nature a Cancer friend can be a social asset. Gleadow advises anyone about to give a dinner party: "If you want to know about food or wine ask Cancer." (He adds unkindly: "And if you want someone who will not object to whatever you do choose Pisces.") 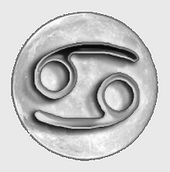 Morrish, in his Ladder of Being (or more strictly speaking, of Becoming), makes Cancer the first of three rungs representing gestation and birth. (He suggests that the heiroglyph could stand not only for crab-claws but for breasts.) The Zodiacal opposite to Cancer is of course Capricorn, an earthy no-nonsense sign that does not suffer from hypersensitivity. The signs that Cancer gets on with are Pisces and Taurus; but in mundane astrology Cancer and Capricorn are bracketed together, not only because they are both solstitial signs (one summer, one winter) but because they are the traditional fields for world-wide disasters. A third-century B.C. astrological missionary from ancient Babylon to Greece named Berosus taught that, when all the planets are in conjunction in Cancer, there will be a universal conflagration (a summery type of disaster); when they get together in Capricorn, there will be a universal deluge.

"Cancer rules the public; mass consciousness. Mass consciousness is ruled by feeling, never by reason. Propagandists and advertising agencies know this fact well and make full use of it in dealing with the public. America, born on the 4th of July, is Cancer born. At the entrance of New York harbor stands a feminine statue that portrays the Cancer type so very well. The protective, yearning, sustaining power is Cancer at its best. We, as a nation, do have a very strong emotional response to the world's need. We need to add to this quality the qualities of reason and discrimination."
Isabel A. Hickey, Astrology: A Cosmic Science, 1970


I guess this explains why those "protective" guns are so popular in the USA...LOL. Interesting that the UK has a Capricorn Sun, using Jan 1, 1801. The USA and UK are quite different, yet so similar, and are strong allies and bedmates, sharing the solar polarity of the Cancer-Capricorn axis. We think the Brits are dour, overly serious, with dry wit...you Brits just think we are over-the-top lunatics.

Canada has Sun in Cancer (July 1, 1867) and those "protective" guns are not half so popular as in the USA: the contrast between 'Peace, order and good government' and 'Life, Liberty and the Pursuit of Happiness' perhaps.

mike ~ I've never been confident about giving inanimate entities natal charts. There is that myth about the USA being homey, motherly, nurturing, sentimental but, for me, it's hard to see it. How would a Cancer country allow its people to go without proper access to health care for so long, leave so many children in poverty, - how about da gunz - how about torture - how about....oh heck everything?

Sabina ~ That's a good point - and strengthens my belief that allocating national natal charts isn't, in general, a Good Thing.

mike ~ you think Brits are dour - no - that's supposed to be the Scots; English are supposed to be phlegmatic. I, for what it's worth, think USA-ans are just too hyper about everything.

Sabina - You have a point there, but Canada is falling into the hyper-security, governmental privacy restrictions upon the citizens, dogmatic themes familiar to the Cancerian astrological stereotype that are currently in favor here in the USA. The vast extent the USA's government, Homeland Security, has gone to "protect" the population and attempts to restrict the borders. I've been astonished at some of the ideological changes and restrictions enforced by the Canadian government over the past couple of years...very non-Canadian!

Also, as with all signs, there are positive and negative expressions, dependent on interpreting the entire chart, with current transiting aspects to the natal chart to consider.


Twilight - Yes, phlegmatic is a good descriptive...LOL...and I like the sound of the word. As always, a case can be made for almost anything astrological, but I do believe that inception charts are valid. Perhaps the greater problem is identifying with accuracy the "inception", as corporations and countries have various levels associated with incorporation. Each country is very different from other countries...same can be said for the states and cities here in the USA. It tends to defy logic, as the entirety of the USA would have an expectation of homogeneity, yet displays tremendous heterogeneity. What makes the difference?

mike, As former PM Trudeau put it, 'Living next to you is in some ways like sleeping with an elephant. No matter how friendly and even-tempered is the beast, if I can call it that, one is affected by every twitch and grunt.' The belief that despite these circumstances, Canada can safely remain immune from considerations of the 'beast's' reactions to our political policies is both naive and dismissive of realpolitik.

Twilight, I'd just say that the differences between these two Cancer countries only demonstrates the limits of Sun sign astrology; chart comparisons go a fair way to fleshing out the differing characters of each.

Twilight ~ In response to your query, "How would a Cancer country allow its people to go without proper access to health care for so long, leave so many children in poverty, - how about da gunz - how about torture - how about....oh heck everything?" ~ there are other Cancer characteristics (possibilities) to consider as well.

Cancer can be tribal, concerned with the wellbeing of clan (family, tribe, ethnic group, country of origin), sometimes to the exclusion of others. But tribe can mean different things to different people. It can be made up of those with whom we share common religious, social, political or financial goals.

They can also (again, sometimes) be materialistic and clinging, holding on as tightly to and as protective of material and financial assets as they are of their emotions, ideas and tribal affiliations.

Deborah Houlding at Skyscript has written a great article on Cancer. She explores in greater depth many of the characteristics mentioned above, also says Cancer:
http://www.skyscript.co.uk/cancer.html

Anonymous ~ Hi - and thanks for this - I've always found Ms Houlding's writings to be on point! I have no argument at all about the negative side of Cancer as a sign, my argument is in the attributing of a natal chart to an inanimate entity such as a nation or a city etc. I've never quite been able to give that any credence - though I've tried from time to time.

Just 'cause it was mentioned US is Cancer, UK Capricorn: has anyone watched the TV series 'House of Cards' - either version? I borrowed the British version (starring Ian Richardson) from the library during the winter and just watched the first two episodes of the later American version (starring Kevin Spacey). The plots appear to be the same but it's quite a lark to see how the story translates from one country to another. (I think Kevin Spacey is even more diabolical than Richardson!)

I briefly had a Cancer friend and Anonymous has certainly hit the nail on the head; and it is also true that their hard shell hides a tender and vulnerable individual. I tend to forget the obvious attributes too, an important one being they are a cardinal sign. Libras also lull one into forgetting that ;P

Sabihna ~ Yes! We've watched both versions of "House of Cards". I was fascinated to see how the US version was managed. I like Kevin Spacey, and hated to see him in such a villainous role, but he carried it off well. I think, to fully appreciate the British version, only British people who followed politics at a particular time would "get it" - fully. Maybe same applies to the US version, but it did seem more open to general appreciation somehow. Maybe that's just me. :-)

I have Cancer rising, I do identify with the sentimental, ultra sensitive (physically and psychologically) mainly, as well as leaning heavily toward introversion as against extroversion.

House of Cards for real:

Sabina ~ Oh my! Yes indeed! I wonder if it's a deliberate leak - and if it's really what it appears to be?

This thing is getting more nightmarish by the hour!