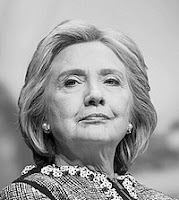 I guess congratulations are in order to all supporters of Hillary Clinton, presumptive Democratic nominee. Why though? What's to congratulate, I ask myself. Because she's a female, shattering that legendary glass ceiling? Not from where I'm standing - I was unfortunate enough to have experienced Margaret Thatcher's reign in Britain. I know exactly what shattering effects to expect from the wrong kind of woman. In my view Hillary Clinton is the wrong kind of woman to hold the breathtaking amount of power attached to being President of the United States of America.

The author of the list below, at naked capitalism responded to an enquirer: "feel free to share" - so I'm sharing it too -


Lambert [Strether] here:
Clinton’s presumptive nomination comes with a number of key policy decisions that liberals must own “going forwards,” as we say:

1. Corruption. To protect Clinton, liberals have adopted the majority doctrine in Ctizens United: Only a quid pro quo is proof of corruption.

2. Transparency. To protect Clinton, liberals maintain that high government officials can, at will, privatize their communications to shield them from FOIA.

4. Health. To protect Clinton, liberals reject Medicare for All.

That’s quite a platform. And if you’re thinking the Democrat Party isn’t the Democratic Party you knew and loved, that’s not an accident either. This has been a wonderfully clarifying primary, for which I congratulate all the players.

A couple more shared thoughts on this "historic" event of glass ceiling shattering we are supposed to celebrate.

Amid the celebrations about picking the first woman as a major party’s presumptive nominee, Democrats appear to have given little thought to the fact that they have abandoned a near half-century standing as the party more skeptical about the use of military force. Clinton is an unabashed war hawk who has shown no inclination to rethink her pro-war attitudes.

"As a feminist, I should feel a thrill right now. I grieve that I don't," lamented author and activist Naomi Klein.

"We are asked to celebrate the breaking of glass ceilings this week, as the possibility of a female president is hailed as long-overdue feminist triumph? But just what kind of a feminist is Hillary Clinton?" asked author Liza Featherstone on Tuesday during a panel discussion on her recent book False Choices: The Faux Feminism of Hillary Rodham Clinton.

While some pointed to Clinton's hawkish foreign policy and lackluster environmental record, others, like Klein, noted that the win was only possible because of her elite status, particularly taking issue with her promise of "trickle-down feminism," as some put it.

We're stuck with Hillary Clinton now though, unless her poor judgment in e-mail management catches up with her. We're stuck, also, with her loud band of obnoxious media surrogates, at least until November. What happens then could well depend upon how many former Bernie supporters obediently fall in line.

From Andrew Levine at Counterpunch

In truth, Hillary’s problem has never been that she is a woman; it is that she is the woman she is........

But compelling evidence and sound arguments are useless in the face of ideologically fixed ideas; and so, the Gloria Steinem types are happy too. However, for everyone whose moral compass is sound and whose head is screwed on right, this final “super Tuesday” was, and always will be, a day of infamy.

On a more shallow note, something I've commented to my husband whenever Hillary Clinton has appeared on a debate stage or during her speech-giving: those peculiar jackets ! I was amused to note, in a piece yesterday, that even a male writer was commenting on this :

As she spread her arms to welcome the Tuesday's results I must admit, I kept thinking, "What the hell are you wearing and why would anyone keep choosing this look?" If someone chooses for her they need to be assigned another task.

I understand how that comment may seem sexist, but this Chairman Mao look just undercuts all she says. It would be like Bernie sporting a Hitler mustache: a visual oxymoron. And she seems to have so many blouses, overcoats or... whatever the heck they are, like that. 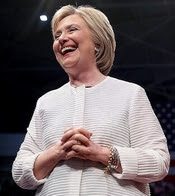 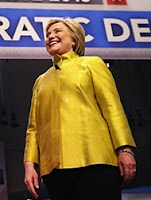 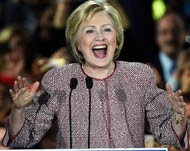 Women of a certain age, or of any age and certain size, prone to feeling sensitive about lack of lithe body, lovely legs, tend to embrace trousers for the latter lack, and loose fitting tops for the former problem. I understand this well - it's not so much the loose tops as the really boringly awful styles she chooses - or has chosen for her. I'm no fashionista, but I do pretend to have "an eye for a good thing", at least to satisfy my own taste - which, admittedly, is probably not hers. Those necklines are so unflattering - a neckline opening to a "V" (not too low of course) would be much kinder, even if she wore a round neck top under the jacket, or at least left the top button of the round necked style unbuttoned. The line of the jacket's "V" would help soften her roundish face, instead of emphasising it, and always looking, to me, too buttoned-up and vaguely uncomfortable.

Sarah Palin, for all her flaws as a political candidate, did sport some really great jackets during her much ridiculed VP escapade. Hillary couldn't get away with the same kind of jacket, but she could improve on those awful outfits we've seen lately. I also read that one of those monstrosities (the reddish one above) cost $12,495 originally - an Armani job, made from lambskin cut into strips, coloured and woven; more about it, and the exact price, which she may or may not have paid at Snopes, HERE.

Hillary's nomination is indicative that no matter how much mouth-power the mainstream centrists and liberals espouse toward a progressive agenda, status quo feels more comfortable in the long run. I just saw on ABC World News that Obama's approval rating is 51% overall and 88% within the Democratic Party. Hillary campaigned on the continuation of Obama politics, business as usual, no need to change planes at the terminal, because we'll just change pilots mid-flight instead. There's tremendous appeal with status quo politics when the individual senses a potential detriment to their security, material wealth, and-or values. Her pantsuits are a uniform of soothing blandness, her female equivalent to the sobering respectability of men's professional wear, a logo of power.

I wouldn't say that Hillary won the DNC nomination fairly, as there seem to be any number of questionable activities surrounding the primaries that may have surreptitiously pushed her to the front of the line. The pre-purchased super-delegates come to mind, particularly with the money for the purchase being money-laundered through the Hillary Victory Fund, to the DNC, then nefariously funneled back to her campaign. Of course, there's her pro-Hillary, DNC chair, Debbie Wassershit that doesn't play favorites. I could go on and on, but then I'll sound like sour grapes served with a platter of moldy Limburger.

Jill Stein may be my best bet at this point, but five more months until I have to make the decision. Maybe I'll move to Colorado instead...chillax with the cannabis herbal remedy...Rocky Mountain high.

P.S. - More sour grapes: One of the demanding factoids regarding Hillary's success is her beating Sanders by about 2.5 million votes, therefore she wins the delegates and the popular vote. These numbers would have changed dramatically had more states held open primaries, allowing independent voters to cast their ballots. An independent voter is more likely to have gone with The Bern. Only 20 states allow open primaries. There are about as many independents as there are party-affiliated voters!

"An open primary is a primary election that does not require voters to be affiliated with a political party in order to vote for partisan candidates."
https://en.wikipedia.org/wiki/Open_primaries_in_the_United_States

"An average 43% of Americans identified politically as independents in 2014, establishing a new high in Gallup telephone poll trends back to 1988."
http://www.gallup.com/poll/180440/new-record-political-independents.aspx

mike ~ Those "mainstream centrists and liberals" are what I, from my natal British background, perceive as simply Conservatives. that's the reason I originally registered as Independent when I became eligible to vote. Having changed registration to Dem in order to vote for Bernie in the OK primary(unnecessarily as it turned out as OK changed rules mid-stream) I now want to change back and find I'm blocked from doing so until after 1 September, due to...rules. Doesn't really make much difference, I guess.

Agreed about the overall fairness of what has gone on over the past 18 months or so.
At least, now, more people are becoming aware of what a complete sham this election game really is in the USA. It is, or has been, very, very cleverly disguised though - gotta give 'em that!

Commenter Jim Haygood, somewhere on line the other day, said
Hillary — better than crashing into a ditch and getting impaled on a fence post as your car explodes in a fireball. :-)

If we don't laugh we'll cry (& done that already!)

Someone on twitter suggested that the jackets are explained by Hillary's having to wear bullet-proof vests underneath them. Sad, but seems possible.

Vanilla Rose ~ Oh! Thanks, I hadn't considered that, but I agree it's a possibility.

She could pay a million dollars for a jacket (and possibly has!) and she would still look ugly in it. She's an ugly woman - it oozes out from inside her. I can only reiterate my comment on a previous post - America is in a pickle.

RJ Adams ~ Just found the and another comment in "awaiting moderation" - forgot to check for a day or two!

Well...I won't be quite as hard on her, she can look pretty decent, when scrubbed-up, but we're all in a pickle one way or another now after that dang referendum! :-)