Are we there yet? Almost !

Primary season is almost over, at last! Today voters in New Jersey, New Mexico, North Dakota, South Dakota, Montana and California will declare their preferences. At the weekend primary voters in the Virgin Islands and in Puerto Rico had their say, Hillary Clinton was winner in each case making Bernie's already tough task that much more difficult. In Washington D.C. Democrats will vote on 14 June - that is the finishing post! There'll then be a break of several weeks before parties' conventions in July, when nominees will be officially chosen. There'll not be much of a break in media coverage in the meantime though, nor of parties' wranglings, attempting to bring their people into line. 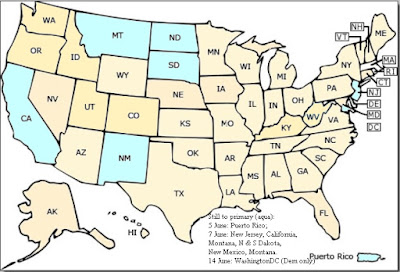 I'll be watching for any shenanigans from MSNBC this evening - such as declaring Hillary Clinton the Democratic nominee hours before California votes are counted - before voters there have even finished voting - see videos below.


It's going to be a nail-biting evening for me, hoping that Bernie Sanders continues to add to his delegate haul and list of "states won". California, with its large number of delegates, is going to be a major focus of attention. I'd be especially happy also if my favourite state to visit, New Mexico, would give Bernie a win. I don't hold out much hope for a Bernie win in New Jersey but the rest may be, as they say, "in play".

P.S. ~ For John Laurits' latest rousing piece of writing do read his 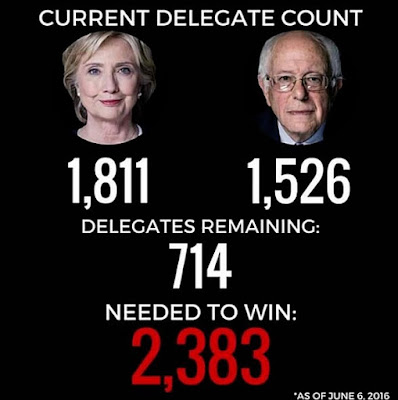 The Associated Press declaring Hillary the victor LAST NIGHT (!?!?!?) was a testament to the elite's ability to maneuver and manipulate this primary process. Why did the AP announce this on a day of no voting? The penultimate day before voting? Of course, MSNBC wanted to be the first with this announcement TODAY, so they pre-announced a week prior. I'm confused whether MSNBC or AP performed the first preemptive strike...LOL. I suppose MSNBC and AP could have announced this a year ago, prior to any of the primaries, but had to wait to make it look right.

Here's to hoping would-be Hillary voters thinking they don't need to cast a ballot today, because she's already "won". They can stay at home sending gloating tweets about the wonders of the first female DNC-nominee and how irrelevant it is that she's a cheat and an insider puppet for the elite...their woman is so much better than The Donald, that her becoming POTUS is a no-brainer...go girrrrrl.

mike ~ Yes - and many super-delegates are lobbyists.

The AP announcement, considering the timing, is voter suppression, plain and simple. MSNBC had already flagged their intention of doing this after NJ had voted tonight, but AP has jumped even that gun. As you say, though, the fix has been in since 2015 or before - probably even since Clinton conceded in 2008, when no doubt it became part of her deal that after she'd done a stint at high level (Sec of State) she'd be made and guaranteed to be a shoo-in for Prez in 2016. :-(

I'm keeping hope that Bernie will do so well in today's voting that it'll take away some of the sour taste AP has left. July 25 is weeks away still - time for lots of the unexpected.

Does Trump's current increased ridiculousness indicate that he's going to self-destruct shortly? I'm feeling that he wants out but doesn't know how to do it.
If he were to exit for whatever reason - what then I wonder?

mike ~ Reading the "Links" section at naked capitalism just now I found this exchange in comments:

Jim Haygood
June 7, 2016 at 10:11 am
Responding to earlier comment:
"Who, exactly, is in charge of the New York Times or the AP? Joseph Goebbels?"
Nope. Billionaire and rabid Hillary supporter Haim Saban, Chairman and CEO of Univision. Saban’s lieutenant Isaac Lee, Chief News and Digital Officer of Univision, is on the board of directors of AP. Board members are listed on page 16:
http://www.ap.org/annual-report/2015/AssociatedPress_2015FinancialStatements.pdf
Michael Golden, Vice Chairman of the Hillary-endorsing New York Times, also is on the AP board.
As is Terry Kroeger, President and CEO of BH [as in “Berkshire Hathaway”] Media in Omaha, owned by billionaire Warren Buffett.
Any questions?

Saban is Hillary’s top backer: Haim Saban, Hillary Clinton’s biggest fan and financial supporter, is Univision’s co-owner and chairman.
Saban and his wife, Cheryl, are Hillary Clinton’s top financial backers, having given $2,046,600 to support her political campaigns and at least $10 million more to the Clinton Foundation, on whose board Cheryl Saban sits.

Saban badly wants Hillary Clinton to be elected president this year, vowing to provide “as much as needed” to see it happen, since “she would be great for the country and great for the world,” and “on issues I care about, [Clinton] is pristine plus.”
http://tinyurl.com/jreqac9

Re Trump - I think he's astrologically self-destructing. The new Moon (Sun, Moon, Venus) at 15* Gemini on June 4th formed a transiting grand-square with Jupiter-N Node, Saturn, and Neptune-S Node that directly impacted his natal chart...same for The Bern. Aspects can be difficult to interpret. This grand-square would normally be interpreted as a frictional negative, but in some cases can produce beneficial results. The Donald has taken a fall coincidental to this grand-square and The Bern is assaulted with premature announcements of Hillary's victory, with the average voter not understanding the details...plus Hillary feigning victim with pronouncements of Bernie needing to forfeit the primary for the "good of all".

Re Haim Saban - Bernie's DNC committee pick of James Zogby has no doubt infuriated the pro-Israeli groupies, adding extra logs to the fire. The Bern and Zogby are both pro-Palestine. Did you read Zogby's essay?
http://commondreams.org/views/2016/06/04/my-role-democratic-platform-drafting-committee

And here's a blurb about Saban:
http://mondoweiss.net/2014/11/billionaires-sheldon-adelson/

I hadn't read the Zogby article - interesting - thank you for the link. Saban sounds like a nasty piece of work!

The atmosphere on-line today is a tad depressing. Many threads seem even more flooded with Clinton supporters than usual. Perhaps it's all part of the attempt to depress votes - and states of mind. I have become extremely anti- towards certain websites I'd previously respected. There are a lot of Limousine Liberals around, and they tend to try to "lord it" over any of their more left-leaning colleagues, feigning higher intelligence or intellectualism....or some damn thing.

The true Left here in the USA is still barely seminal, it needs nurture and enthusiasm to keep it growing, it could so easily be trampled down - and that SHOULD NOT HAPPEN!

Saunders has several entries on his site about the election. Here's his first post after hiatus about the Hillary vs Donald, with interesting perspective about Venus' role in the November 8th election:
http://solarisastrology.blogspot.co.uk/2016/04/the-2016-american-presidential-election.html

Mike (again) ~ Thanks for these links - I've skimmed them, and will look in more detail tomorrow. It's a sad night for Bernie supporters. I'm trying to stay awake to hear what Bernie has to say.

I'm not sure I can retain interest in the next stage. :-(

A bereft day. I'm sure there will be many interesting days until the election, with Trump today saying he'll unleash some damaging Clinton information next Monday. The reality show has just begun. The Donald is not dull, just offensive.

Your Wellstone sidebar quote, "The American polity is infected with a serious imbalance of power between elites and masses, a power which is the principal threat to our democracy." (Essay titled, "The Case for Commitment," undated), was written for a previous chapter in American politics...I suppose there's comfort in knowing that we are again being served-up the continuum. Reminds me of the advertisement on TV presented by the American Egg Board, where the students in the classroom are all eggs and the teacher is taking roll-call...each pupil answers "Egg".

mike (again) ~ There's a lovely hashtag thread at Twitter this morning:
#Thank you Bernie
It made me weep - and feel thankful. Not sure if the link will take you there, but here it is:

Sad days for America and the world. I gave my two-pennyworth on Sparrow Chat, but I fear America is not yet ready for Bernie Sanders. In truth, I think my political inclination is more towards Trump than Clinton, if only because other world leaders find him so obnoxious.

Yes, sadly Bernie's too good for this place. There's a way to go yet - I'll be surprised if Trump is still in the race come November. It just doesn't feel right to me - something'll have to give!