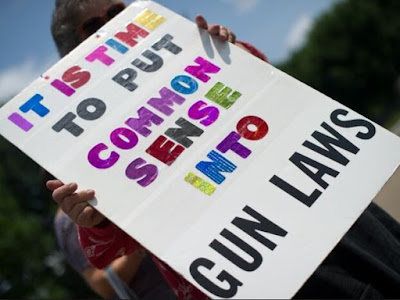 At least 20 people have been killed and some 42 injured in a shooting at a gay nightclub in Orlando, Florida, police say.

Updated: A mass shooting at a gay nightclub in Orlando, Florida, that police are calling a “domestic terror incident” has left approximately 50 people dead and at least 53 injured.

And only around 24 hours earlier, also in Orlando was the shooting to death of Christina Grimmie, the 22-year-old singer who made her name on NBC's "The Voice" as she was signing autographs after a performance.
Posted by Twilight at Sunday, June 12, 2016

Something just has to be done to get at least the assault weapons out of the hands of the general public. There is no realistic justification for keeping them.

We humans have never had a good record when it comes to weapons of any kind...something "off" about our brains...we can't even be trusted with our own hands and-or words. My sympathy to all of the relatives and friends of the deceased, and to the survivors of the horrific nightclub slaughter...your lives are forever marred.

“Why is it that, as a culture, we are more comfortable seeing two men holding guns than holding hands? ” Ernest J. Gaines

“I admit I was the guy who removed all the bullets from the assault rifle’s extended magazine and then filled it with pot. But now I realize that was wrong because marijuana is dangerous.” Tim Dorsey, Shark Skin Suite

mike ~ Indeed - from the moment early homo-sapiens picked up a log and realised its potential as a weapon - we were doomed. Weaponry has become so much more of a threat than a club though - or than a knife, and should, by any sane or even half-sane government be strictly regulated, regarding access by general public.

I echo your sympathies to families and loved ones of those lost and injured in this dreadful event.