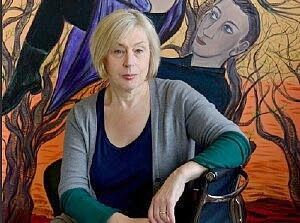 Eileen Cooper RA is an English contemporary painter and print-maker, who makes stylised paintings of women or couples, often featuring unexpected animals (particularly a tiger). She was born in Glossop, Derbyshire, studied at Goldsmiths College, London from 1971 to 1974 and the Royal College of Art, London from 1974 to 1977. Cooper was elected to the Royal Academy on 24 May 2001, and in 2011 she became the first woman to be elected Keeper at the Royal Academy.(HERE)

The figure of a woman is central to Eileen Cooper's imagery: heroine, goddess of myth, mother, lover. Her strong drawing with fluid simplified lines and colourful compositions make her work immediately recognisable. Her style invokes Picasso and Chagall as well as the Mughal miniatures she admires. (HERE)

An overall idea of her style can be found by taking a look at the Google Image page featuring her artwork:
Eileen Cooper at Google Image 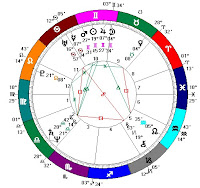 I've included a natal chart for reference but haven't attempted any interpretation out of respect, as Ms Cooper is still around, still painting, and not a very public figure, as are others whose natal charts are frequently investigated by astrologers. Instead I've chosen three of her paintings to include here: 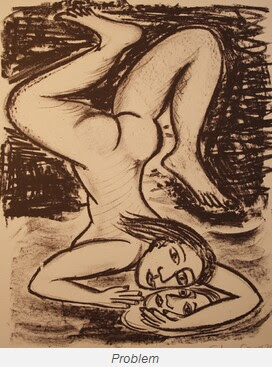 Any copyrighted material on these pages is included as "fair use", for the purpose of study, review or critical analysis only, and will be removed at the request of copyright owner(s).

I watch my life go by in "Arty Farty" posts and milk expiration dates, Twilight!! Fridays arise as if they follow Tuesdays nowadays.

I looked at her Google images and thought for sure that she had a lot of Earth signs in her natal. Her selection and usage of the earth-tones, outlined figures, most without visual depth, provide a feeling of the mundane. I'm surprised to see that she only has Chiron, Venus, and possibly Moon, if born in the very early hours, in Earth signs. If her Moon is in Gemini, she has a mutual reception of Moon and Mercury. Her work doesn't convey much emotion to me, not a lot of drama, so I'm inclined to think her Moon is in Gemini, with her less emotional, sketch-like portrayals, leaving it to the viewers' mental faculties to fill-in the meaning of each scene. Many of her pieces have a simplistic, almost mechanical style, yet with her juxtaposition of incongruous objects, she conveys complexity. Moon, Mercury, and Venus are her final dispositors, if her birth is after 3 AM...only Venus, if her birth is before 3 AM.

Her Saturn-Neptune conjunction in Libra (ruled by artistic Venus) trine Sun, with Pluto at the midpoint, should allow for a preponderance of creative expression. These same aspects probably carry-over to her relationships and social receptivity and interaction. I bet she's a great dinner party guest. Potential for a good writer, too.

Yes, it's not a particularly Earthy chart unless Moon was in Taurus, and I agree, she has potential to be a good writer. I don't quite "get" her art style - I don't dislike it but I don't get it.

I originally had prepared this post with two painters, Eileen Cooper and André Derain - I originally thought both were born 10 June (many years apart), then found Derain's d.o.b. was given as 17 June at astro.com, while Astrotheme has 10 June. So I deleted all I had prepared on Derain, leaving this a rather short Arty Farty offering. Derain was a colourful artist (Fauvist) but his style didn't really appeal to me.