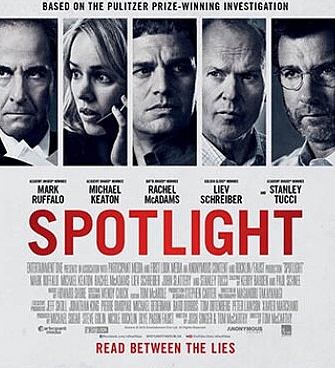 We watched Spotlight via Netflix this week. "The true story of how the Boston Globe uncovered the massive scandal of child molestation and cover-up within the local Catholic Archdiocese, shaking the entire Catholic Church to its core." It's an engrossing, well-done, well-acted dramatisation of investigations conducted by a team of 4 journalists in 2001, in and around Boston. Highly recommended! 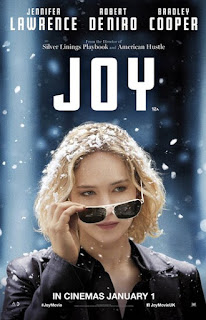 We've also watched recently a DVD of Joy, another fact-based story, this one biographical. The movie's subject is Joy Mangano, a self-made millionaire who created her own business empire. From a humble and chaotic dysfunctional family background her rise to success and wealth began with her initial invention of a self-wringing floor mop! A decent movie. I'd have preferred a little less detail of her early struggles, and more on her eventual rise in business, which was rushed into the closing minutes of the film. Other than that, an entertaining couple of hours or so.

I've viewed neither. "Spotlight" would simply deepen the already incredibly DEEP contempt I have for the Vatican. Our corrupt politicians are lame compared to some Popes and priests, historic and contemporary. Amazes me how the Catholic church has been a front for some of the most depraved acts and injustices possible.

I wouldn't mind seeing "Joy". I see it's only available on Netflix via DVD. Why-o-why does Netflix still support DVD, except to extract a little extra money from their subscribers. I'd pay and extra buck or two per month for the streaming of their DVD titles. I've complained here prior that these streaming companies seem to avoid the all-inclusive streaming service. Currently, each company only provides their own unique segment-slice of the total streaming experience, with several having overlaps making it a poor choice of redundancy to subscribe to two or more.

I watched "Holes" a week ago on Netflix. Tame Disney movie meant for family viewing...not a lot of depth or intrigue. A number of famous actors, so it was a disappointment that they didn't have a better script to utilize their talents. I suppose that if I was a good actor and needed extra lunch money, I'd take poor scripting, too. I'm always reading movie reviews where the critic states, "crummy movie with great performances...the acting couldn't make-up for the bad plot."

Few new releases in theaters right now. Usually the July 4th weekend has some good offerings, but not this year.

mike ~ I agree on the RC Church. "Spotlight" has its focus on the investigative process mainly, so it IS interesting from that perspective.

I rented "Joy" from our local video rental store - went there looking for DVD set of the new X-Files episodes said to now be released. The store had them, but at too high a price per night, so will wait for price to reduce - or for the episodes to appear on Netflix. Saw "Joy" DVD and took that instead and a couple of other older movies. I like to give the store s bit of business now and again, just so it doesn't fold as Blockbuster did, and Hastings did before that.

Husband was, eventually, caught out in his free Amazon Prime month and we now have to pay for the rest of this year. One benefit was being able to finish "The Good Wife" in its last season. There are an awful lot of rubbish films and series on Amazon too, and it's quite clunky in set-up as compared to Netflix. So we now go on frustrating fishing expeditions in each venue.

Cinema releases, as you say are pretty dire at the moment. I was given a Cinema voucher as a birthday gift back in January, and still haven't found any movie to go see! "The Free State of Jones" is showing now - we might go for that, if only for me to ogle Matthew McConaughey, though he's not at his ogle-worthy best in this role from what I can gather. ;-)

All that pursuit in "Spotlight" and still the problem exists and persists.

anyjazz ~ Sadly yes, and among so-called "celebrities" as well as in the environment of "Spotlight".