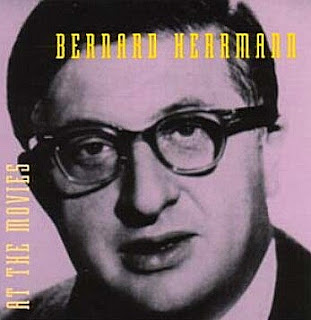 Bernard Hermann, American composer and conductor best known for his work in composing for motion pictures was born this week, on 29 June in 1911.

A look at his natal chart, to discover whether it was a good fit. On first glance, the presence of Neptune (film) in the same sign as his natal Cancer Sun though not close enough to be considered conjunct, is a good signature. Pluto lay just over the Gemini cusp at 27 degrees of that sign, on the other side of natal Sun, and conjunct Mercury at 1 Cancer. This was less expected, until I'd read more about the man. There's a T-square Neptune/Uranus/Mars and an almost Grand Cross (too loose at one point) formed by squares and oppositions between: Mars, Neptune, Jupiter and Uranus, both formations indicate some difficulties, some innate scratchiness or hard edges.

Jupiter in Pluto-ruled Scorpio in harmonious trine to the Mercury (communication)/Pluto (occasionally explosive) conjunction reflects, perhaps the extreme (Jupiter) explosive temper he sometimes displayed according to reports (below). Pluto's link to a personal planet might also feed into the composer's frequent "Gothic and gaslight" music style, also mentioned below.

Natal Moon was likely have been somewhere in spotlight-loving Leo, along with natal Venus (the arts) making a nice connection to the showbiz vibe of the film industry. 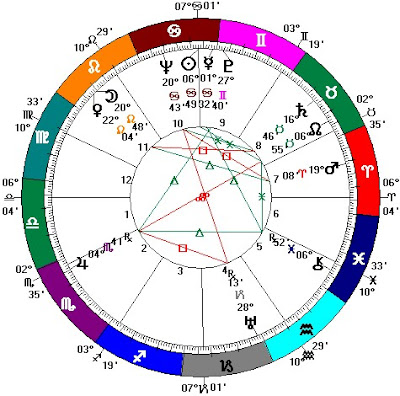 Some gleanings from reading further about the man and his personality as well as his career detail. The snips from linked articles uncover some of the personality traits reflected in Herrmann's natal chart, as well as giving brief detail of his best-known work. Highlights in both cases are my own.

Regarding his work -from a mini bio by Michael Brooke at IMDB:


The man behind the low woodwinds that open Citizen Kane (1941), the shrieking violins of Psycho (1960), and the plaintive saxophone of Taxi Driver (1976) was one of the most original and distinctive composers ever to work in film. He started early, winning a composition prize at the age of 13 and founding his own orchestra at the age of 20. After writing scores for Orson Welles's radio shows in the 1930s (including the notorious 1938 "The War of the Worlds" broadcast), he was the obvious choice to score Welles's film debut, Citizen Kane (1941), and, subsequently, The Magnificent Ambersons (1942), although he removed his name from the latter after additional music was added without his (or Welles's) consent when the film was mutilated by a panic-stricken studio. Herrmann was a prolific film composer, producing some of his most memorable work for Alfred Hitchcock, for whom he wrote nine scores. A notorious perfectionist and demanding (he once said that most directors didn't have a clue about music, and he blithely ignored their instructions--like Hitchcock's suggestion that Psycho (1960) have a jazz score and no music in the shower scene).....

For more about his personality The Trouble with Benny, by Matt Williams is enlightening:
SNIPS


To assess Herrmann’s success in the film world it is first necessary to understand the composer himself. Herrmann was a complex man whose perceived weaknesses — his explosive temper and intolerance of sub-standard musicianship, to name but two — often worked for rather than against him. Here was an outspoken, highly literate and intelligent man whose intense interest in film and the dramatic medium allowed him to write music rich in musical colour; and which, when carefully placed under a dialogue track, increased the import of the spoken word, lending dialogue a greater significance than it might otherwise have had.

Herrmann came from an era of ‘serious’ composers. He was still a young man when the Depression hit hard in America in the 30s; the rise of Nazism can’t failed to have affected the way he perceived people and their motives being himself of Jewish parentage. Consequently his film music has a distinctive weight and intensity often lacking in today’s scores.

Like the man himself, many of Herrmann’s most memorable scores are brooding and portentous in nature. Even the purportedly romantic music for films like Jane Eyre and The Ghost and Mrs Muir has an edginess and a sense of nostalgia and sadness which perfectly complement the films in question. As one critic observed, his was the music of ‘Gothic and gas light’.

Much has been written about Herrmann’s irascibility, his seemingly unprovoked rages and outrageous and opinionated views of others. Both his father and his grandfather shared his temperament, which at its worst led to a reddening of the face, a tensing of the facial muscles and a string of curses and insults — all apparently unprovoked. Herrmann was distrustful and intolerant of the musical opinions of others. To one unfortunate recipient he retorted: ‘Your views are as narrow as your tie’.


A 5 minute video-skip through some of Herrmann's best-known themes:

Just back from the veterinarian and GiGi is doing fine...continue antibiotics for another ten days to ensure her bladder is free of bugs. I see our DJIA is down another 250 points, but the British Pound has lost only a couple of pennies, so far. SCOTUS came to the pro-abortion clinics here in Texas, but good news for all of the USA, too...a 5-3 ruling, so it's permanent. Now we have Texit circulating the rounds. Will the South become the Confederacy again?!

Bernard Herrmann sounds like a narcissistic intellectual, but there were a number of famous men of that era with the trait. Refined, witty, intelligent, well-dressed. I remember the Gore Vidal-William Buckley spats. Capote, Isherwood, Auden, Huxley, et al. Women, too, such as Dorothy Parker, Lillian Hellman, and Ruth Hale. A bit of pretentious self-importance, with a dominant, flippant personality was acceptable back then, so Herrmann wasn't alone by any means.

I don't see much to support his inflated ego, except that he has Sun (conj Mercury & Pluto)-Jupiter Rx-Chiron grand trine, and that may lend to some over-inflation, particularly with Jupiter Rx on the S Node. Or as you indicated, just too much energy there with Sun-Mercury-Pluto. His Jupiter is disposited by Mars in Aries, one of his final dispositors...all other planets are disposited by Sun-Moon in mutual reception, so his ego was powered through his emotions, and his emotions were powered by his ego...it was probably difficult for him to separate the two and tantrums came easily.

mike ~ Glad GiGi is well! Yup - things financial still goin' down. GBP/USD went from $1.37 to the pound on Friday to $1.32 today - some say even lower than that.
It doesn't help that British political parties both are in disarray!
SCOTUS did good.
Texit...LOL! Well I hope not, I enjoy our day trips to Wichita Falls or Bowie - don't relish having to present passports at the border walls - which they would no doubt be erecting. ;-/

B. Herrmann doesn't sound like much of a charmer. He's of the Pluto in Gemini group, some greats among 'em - especially writers; but some over-blown examples, depending on the rest of the chart. Thanks for your additional astro-pointers.