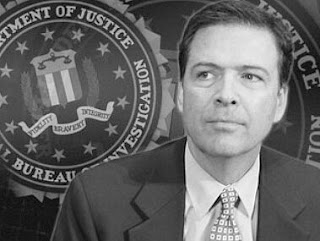 A recent article by Roger Aronoff set me wondering: Has FBI Director Comey Waited Too Long on Clinton Scandals?
I wasn't wondering that, I was wondering what kind of guy is James Comey, Director of the FBI.

A couple of snips from a couple of articles including the one linked above:


As a federal prosecutor, his politics had been vague, but it was generally assumed he was a standard law-and-order Bush loyalist. Now he was a Republican dissident, an anti-Cheney who dared to say no to his masters in the nobler cause of defending the integrity of the Justice Department, indeed of the constitution itself.

Even so, most Republicans too still liked him. Comey’s height, 6ft 8in, might have made him an intimidating figure, but who could dislike for long so gregarious a man, with a terrific sense of humour? And no one begrudged him when he left Washington to return to the private sector, as chief counsel first for Lockheed-Martin, then for the Bridgewater hedge fund. After all, when you’ve five children to put through college, a government salary doesn’t go very far.


From Roger Aronoff's piece linked in paragraph one, above:


They say: “The integrity of Comey is pretty much unmatched with the exception of Director Mueller.” Tim Murphy, former deputy director of the FBI.

[Regarding Hillary Clinton's e-mail management and related problems, and following the President's endorsement of Clinton]
They include the mishandling of classified materials, obstruction of justice, the public corruption scandal in which she used the State Department as leverage for benefitting the Clinton Foundation as well as her family, and Benghazi.

Contrary to President Obama’s assertion that he is allowing a non-partisan and full investigation, by endorsing Mrs. Clinton he has placed his hand on the scale of justice and made his wishes more than clear to federal investigators. The question is, will Director Comey and the FBI follow the President’s direction?

The evidence against Mrs. Clinton is clear. If Director Comey finds no evidence of criminal activity by Mrs. Clinton, he will lose his reputation as a straight shooter. Either way, at this point, it will be viewed as a political act. If the Attorney General and President Obama stymie an investigation through political interference, Director Comey could, and should, go public. There might even be a revolt within the FBI. Whether or not that happens, Hillary Clinton’s fate is now quite clearly in Director Comey’s hands.

Is there anything in James Comey's natal chart to support what's been said of him above - gregarious, terrific sense of humour, and most important of all...his integrity? 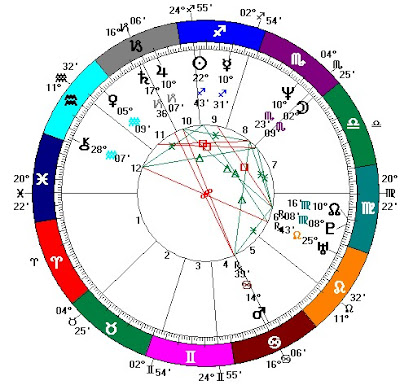 Without a time of birth the important rising sign can't be known, nor can exact position of natal Moon - so we can only grasp at whatever straws remain.

Sun and Mercury in Sagittarius do often reflect a sunny, ebullient nature, for which, from the above observations, he is known. Jupiter, Sagittarius' ruler is in semi-sextile to Mercury on one side from Capricorn, and Jupiter is conjunct Saturn in its own sign of rulership. This connection draws law into the picture via both Saturn and Jupiter. Neptune, also in semi-sextile to Mercury from Scorpio could be drawing in some fogginess, which is not quite as inspiring. However, North Node of Moon in meticulous Virgo sextiles Neptune and trines Jupiter/Saturn. I see Virgo as reflecting well on the question of integrity, though how much Moon's N. Node influences personality, I'm not certain. Moon's Node is conjunct Pluto too - and Pluto is in its sign of rulership, Scorpio. There's a definite feel of strength here.

Venus in Aquarius adds a quirk of the unexpected in his nature, and sextiles Mercury the communication planet. I like this placement - but it's conjunct my natal Sun, so I would, wouldn't I?

Mars opposes the law-related Jupiter/Saturn conjunction from Cancer - how to interpret that in this instance? As Mars trines Neptune, the rather iffy factor in this astro-tangle, I'd say here is a potential "fly in the ointment".

Any other ideas, bearing in mind the important ascendant and Moon sign/position are unknown?

James Comey...I've never been certain about him...LOL...maybe I simply don't trust him. He prosecuted Martha Stewart for insider trading, when there were far better and bigger examples he could have chosen. Fortunately, Martha persevered, carried-out her prison time, and came-out with better publicity than before. She turned the proverbial lemons into lemon chiffon pie.

Comey has been employed in many high-profile, big corporation positions, so I have to wonder whether he is just another corporate elitist, with a penchant for proper and acceptable appearance to pass public scrutiny. He supported mass incarceration and is extremely pro-police, even with tactics using unnecessary force and excessive militarization. The FBI vs Apple controversy over "back doors" to cell phones was his push. The FBI rarely accomplishes much in advance of a security threat, even with it's vast capabilities to intercept just about everything imaginable. I'm not a fan of the FBI's constant pilfering of private data, which hasn't stopped under Comey, in fact, it's become worse. Often, the extent of the FBI's hands in the cookie jar aren't known until exposed for wrong-doing. The FBI has received much criticism over the use and secret protections afforded the Stingray, cell phone simulator-interceptors.

His Pluto-N Node conjunction in VIRGO is trine Jupiter, with Neptune at midpoint in sextile. Pluto-N Node are also square his Mercury and inconjunct Venus. His Pluto signature gives me pause, considering the Mars opposition to Jupiter-Saturn...Mars opposes almost exactly the midpoint of Jupiter-Saturn. If his Moon is in Libra (birth time before 8 AM), his final dispositor is Saturn...if Moon is in Scorpio, add Mars and Moon in mutual reception, also as dispositors. I would normally say that his Sun trine Uranus would produce a maverick sorta fellow, but it's possible that should his Moon be in Libra, the Moon would be at the midpoint and sextile both. He seems to support many worthwhile social causes and is put into positions requiring soothing of corporate structure...indicative of someone with a Libra signature.

I think James Comey appears good and decent on paper, but I suspect there's a deeper, less congenial side to him. His Saturn in Capricorn, having rulership over so many of his planets would make him very aware of corporate structure, hierarchy, social rules, doing what it takes to succeed in a network of "buddies". Mars opposing in Cancer is in "fall", weakening the appearance of aggression, too, allowing him to come across as a corporate pacifist, while making an iron fist.

mike ~ Thank you for these thoughts and interpretations. Re your last paragraph - yes, I think so too. We have to acknowledge that to have risen his position, in that particular environment, such character traits are going to be "a given". It's good to see astrology whispering about them.

You've been expecting all along that it's unlikely there'll be any indictment of Hillary Clinton. I've hoped otherwise, but it's a vain hope. Comey isn't likely to go against the President's wishes, and the President would hardly wish his "legacy" to be dirtied by having endorsed a criminal. :-(

BTW - Comey has some very strong transits upon him:
Pluto on his Saturn, opposed his Mars
N Node return
Saturn on his Mercury
Neptune square his Mercury...he is caught-up in our current Jupiter-Saturn-Neptune T square
Both Mars and Saturn will be conjunct his Mercury August 23
Solar eclipse on his Pluto-N Node this September, which aspects the planets in your and my comments, above

mike (again) ~ It'd be nice for it to have a proper name, seeing that it will with us always, at least always for all or most of the people on Earth at present. Some astrologer, somewhere, ought to have ideas. :-)

It may fulfill the Dark Moon Lilith tale:

Some say there is a second Moon circling Earth, a mysterious dark moon that is only seen on rare dates when it is opposite the Sun or when its shadowy silhouette crosses in front of the Sun. Although its existence has not been verified, those astronomers who claim to have viewed it say it is one-fourth the size of our familiar Moon and three times as far away. It takes 119 days to orbit Earth, about ten days per sign. This is Dark Moon Lilith. Supposedly sighted as long ago as 1618, this body came to broader attention through the work of astrologer Sepharial in 1918, and more recently through the writings of Delphine Jay, who also published an ephemeris for the Dark Moon Lilith.

Like a dust cloud, Dark Moon Lilith absorbs the light into itself, a very different process from that of our Sun-reflecting Moon. Whereas the reflective Moon represents personal, subjective feelings, the Dark Moon represents a primal, impersonal, creative instinct that seeks identification apart from the physical and emotional realms."
http://www.mountainastrologer.com/standards/editor's%20choice/articles/lilith_hunter/lilith.html

mike (again) ~ Interesting, thanks! If the asteroid is big enough to fit, that seems like a good theory. :-)

well...i know zilch re: astrology, but here we are months later, and y'all have some of the answer. But not necessarily all, as of yet.

Anonymous ~ Yes, it's now almost a year later and Comey keeps popping up in the news cycles again and again. At least it keeps bringing my post a few extra "hits"....the gift that keeps on giving. ;-) He's out of a job now, maybe this'll be the end of the line...or will it?