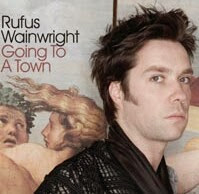 Day after Christmas Day, while typing, I was listening "on demand" to a BBC 2 radio show: George Michael in concert. He sang a song I'd not heard before, written in 2007 by Rufus Wainwright: Going to a Town. George Michael had recorded a cover version of the song for his latest album earlier this year. The lyrics immediately grabbed my attention. The song is a lament about the USA, country of Wainwright's birth.

Tell me, do you really think you go to hell for having loved?
Tell me, enough of thinking everything that you've done is good
I really need to know, after soaking the body of Jesus Christ in blood
I'm so tired of America

I really need to know
I may just never see you again, or might as well
You took advantage of a world that loved you well
I'm going to a town that has already been burnt down
I'm so tired of you, America

Making my own way home, ain't gonna be alone
I'm going to a town
That has already been burnt down.


At the time the song was penned G.W. Bush was still president, wars raged in Iraq and Afghanistan, housing bubble, done with bubbling under, was ready to burst - loudly. "I'm so tired of America....." Wainwright wrote, and sang.

The song tells that the singer was going to Berlin, maybe for good - to a city "already burnt down" (in World War 2, its people let down and disgraced by their then leader).

In interview Wainwright had said, “We all love America.....but we have to admit that there’s just been too many mistakes made in the recent past over too many issues, and we’ve just got to deal with that fact.”

Seven years on, the song comes up as fresh as if it were written yesterday, in spite of the fact that Bush Jnr has been out of the White House for years.

I have a mild criticism, and it's of the spirit of this song. The singer is about to leave his native land because he dislikes what it has become - yet it is a country where a section of its population had been appreciative and generous enough to make a star of the singer-songwriter. This scenario doesn't seem particularly admirable. Staying, rather than leaving, leading or joining a struggle to help make the country more comparable to what it had once been (if indeed it had) would have presented useful and positive thoughts to fans.

Rufus Wainwright's version (sorry about the ad at the beginning!)


Music like that adds too much negativity and I dont care for it.

To me its the age old problem of looking at whats wrong and ignoring whats right OR ways we could each make things better.

I can sing/talk all day about how no person in this country should be hungry OR I can volunteer at a soup kitchen- food pantry- go out at night handing out food bags. I won't get famous and make money from singing the song, but that's ok, I'll feel a lot better for knowing I did something I feel was worthwhile.
That song and others like it always bring to mind the rappers I've heard or read about who constantly talk about killing and other negative things and then go out to buy their mansions-- bling -- tricked out cars-- women and drugs. How can people not see what "they" do as soon as "they" become the people they sing about hating so much..
The 60's protesters are now the head of corporate America and the decisions they've made are as bad or worse than those before them..

Sonny ~ I like a good protest song, but this one was, as you say, too negative. It does remind and underline, though, how not much has changed since it was written some 7 years ago, in spite of a "change" of party in power.

If I'd ever been able to decipher what rappers are "singing" about, I'd probably agree with you, but for me their nattering on is simply noise.

Wealth and fame do tend to go straight to the head of most "celebs", especially those who achieve beaucoup $$$$$$$$ while still young.

Well, I smell a boycott and an American temper tantrum coming with George Michael's version, specially with the burning cross in the background. I imagine the heavy hitters (Sarah Palin, Rand Paul, Ted Cruz,et al...LOL) will denounce this video and want it banned. My own sentiments aren't that different from Wainwright's words. I'm often baffled by government and the complacent reaction of the American citizens toward government, or worse, the majority of citizens that think our government is correct to start baseless wars, minimize personal freedoms in the name of security, or allow corporations to become our government. Baffling to me, I tell ya.

I recall the Dixie Chicks that were ostracized for their criticism of the Iraqi war:
"Right-wing blogs and talk shows vilified the Dixie Chicks as unpatriotic and worse. A website site statement from Maines said, 'I feel the president is ignoring the opinion of many in the U.S. and alienating the rest of the world. We've been overseas for several weeks and have been reading and following the news accounts of our government's position. The anti-American sentiment that has unfolded here is astounding. My comments were made in frustration, and one of the privileges of being an American is you are free to voice your own point of view.' She apologized to President Bush for being 'disrespectful' to his office, but added, 'I just want to see every possible alternative exhausted before children and American soldiers' lives are lost.'"
http://www.dailykos.com/story/2013/03/11/1193171/-Ten-Years-Ago-This-Week-the-Dixie-Chicks-Found-Free-Speech-Comes-at-a-High-Price

Perhaps if Wainwright wrote "American politics" rather than "America" in his lyrics (thereby taking the listener out of the equation) it may be deemed more palatable. But it wouldn't rhyme or have the same refrain.

I agree with your assessment of some rap music, Sonny, but most rap music is not political. Wainwright's lyrics are political protest, not culturally defining.

There will always be more money and fame in feel-good American heartland rock, like Bruce Springsteen's "Born in the USA" (1984), or music by Mellencamp, Petty, or Seger. Song that politicians use during campaigns.

BTW, George Michaels could just as easily have substituted the word "Britain" for "America", but then the lyrics wouldn't have been Wainwright's.

P.S. - A nation that starts two wars against a UN vote of other nations and kills over a million civilians, and tortures against the Geneva Conventions, and has at least one administration (Bush, et al) that is liable for war crimes, SHOULD be hearing music louder than Wainwright's or Michaels'.

I totally agree with you, Mike (again).

Let's hope the music is deafening for those responsible, and that some day justice will be served to those who were accountable.

As a matter of fact, let's make it a new year's resolution.

mike ~ Well, yes, I agree with the sentiment that America/American politics were, in 2007, and still are, enough to p... off any sane person. The idea of running away from it that this song presents is what I'm not keen on, especially because its writer, due to his musical talent, has "done very well" out of the country. I don't think Wainwright did actually abscond to Germany, anyway.

Agreed, George Michael could quite easily relate the song to his country, Britain. UK and USA are becoming more alike by the year - or so it seems. I prefer George's version of the song (but then I'm a fan of his) burning cross is an especially good background!

Jefferson's Guardian ~ Agreed - all we need now are some songwriters with the right ideas, and a VERY loud band.