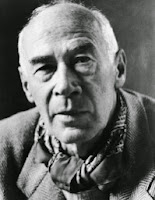 On this day, 26 December, Henry Miller was born, in 1891 in Yorkville, Manhattan. As well as being a writer, Miller was a painter (well, kind of). It's said he painted in excess of 3000 watercolours during his life. He loved to paint, though wasn't exceptionally talented in that direction. He was enthusiastic about his art, loved colour, experimental style and composition.


As well as writing and painting Miller had a serious interest in astrology. Some snips from Arthur Hoyle at goodreads.com --


Henry Miller was a devotee of astrology. He employed astrological imagery in his writing for expressive purposes, and he relied on astrology when faced with important decisions in his personal life. Miller viewed astrology metaphorically, as a system of correspondences between the inner world of the psyche and the soul and the outer world of the planets and the stars between the microcosm and the macrocosm. And because Miller wished to lead an astrological life marrying his own personal rhythms to the larger rhythms of the universe, he looked to astrology for guidance through personal difficulties.

Miller’s interest in astrology as a literary device is evidenced by the titles of two of his most famous books, Tropic of Cancer and Tropic of Capricorn. These titles reference both geographical zones on the planet Earth as well as signs of the zodiac. As he worked on Capricorn in Paris, he wrote to his lover Anaïs Nin explaining the astrological significance behind these books. “For me Cancer means the crab the creature which could move in any direction. It is the sign in the zodiac for the poet the halfway station in the round of realization. Opposite Cancer in the Zodiac is Capricorn, the house in which I am born, which is religious and represents renaissance in death. Cancer also means for me the disease of civilization, the extreme point of realization along the wrong path⎯hence the necessity to change one’s course and begin all over again. Cancer then is the apogee of death in life, as Capricorn is of life in death.”

.........while Miller was living in Big Sur, California and working on his novel trilogy The Rosy Crucifixion (another title rich in occult symbolism), he received a letter from the astrologer Sydney Omarr, who had noted the frequency of astrological imagery in Miller’s books and proposed writing a study of it.... Omarr asked Miller for cooperation in writing his study, to be called "Henry Miller, His World of Urania". In his forward to the book Miller wrote, “What interests me primarily in astrology is its holistic aspect. The man who is whole sees whole, and for him the universe is an ever expanding universe......" Elsewhere in the forward Miller warned against using astrology as a predictive tool: “It is not to discover what is going to ‘happen’ to us, it is not to forestall the blows of fate, that we should look to our horoscopes. A chart, when properly read, should enable one to understand the over-all pattern of one’s life.” .......But despite this disclaimer, Miller did turn to astrology to help him cope with stressful periods in his life....

For many years he contemplated writing a purely astrological work to be called Draco and the Ecliptic. Omarr explains the significance of Draco: “For the esoteric astrologer a tremendous idea lay behind the myth of the Dragon, which was called the thirteenth House of the Zodiac. For the Chaldeans the Dragon was the first created being; it was through the Dragon in the sky that man gained admittance to the ‘heaven beyond heaven’.

"The world is not to be put in order. The world is order. It is for us to put ourselves in unison with this order."
― Henry Miller

Natal chart with 'A' rated data from astro.com. 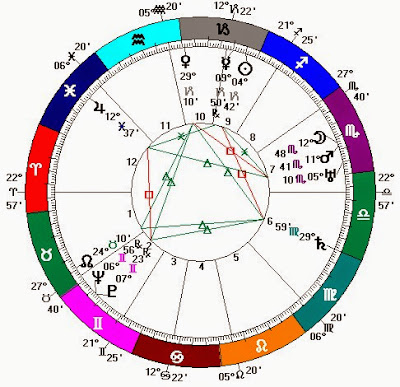 Mr Miller had some nice harmonious aspects in his natal chart: Venus/Saturn in trine from late Capricorn and Virgo; Sun & Mercury in Capricorn sextile Moon, Mars & Uranus in Scorpio; Jupiter in Pisces trine Moon/Mars/Uranus. Earth and Water, earthy, emotional, sexy; a little eccentric and at times "over the top" - which, I think, more or less describes his writings. I admit that I haven't read any of his work though. 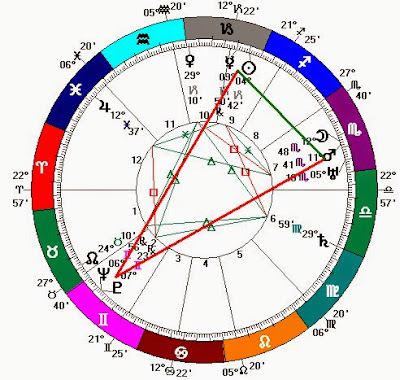 This Yod (Finger of Fate) consists of the sextile between his Sun/Mercury and Moon, etc. being hooked up to Neptune/Pluto by quincunx (150 degree aspect). I'd translate that as a further configuration helpful to his writing skills - though I dare say astrologers might not agree, some regard Yod formations as being less helpful.

Can Miller's interest in astrology be identified in his natal chart? Triple Scorpio emphasis trining Jupiter seems a likely source.


"We are dancing in the hollow of nothingness. We are one flesh, but separated like stars."
― Henry Miller

I think you are correct about his yod. Mercury is the most elevated, so recognition for his writing is indicated. He wrote about his relationships (7th house) and human values (2nd house). Sex, disruption, and perversions were substantial topics in his discourses. Mars, his 1st house ruler in the 7th conjunct the Moon would have provided the interpretation of himself via others and his relationships...plus Mars in Scorpio, with Mars co-ruling Scorpio, gave him and his relationships a sharp edge of sexiness, as you said. It's been my observation that individuals with personal planets in the 7th interpret themselves through others. Few writers at that time were writing essays about themselves, their perversions, and their debased encounters (they may have been known as such, but didn't publicly disclose the information themselves...LOL).

He was quite a character and a major player in the obscenity legal challenge. The negative press created a demand for his books on that basis alone.

mike ~ His harmoniously integrated chart maybe led to his generally feeling pleased with himself and all of his sexy encounters.

Thanks for your additional astrological pointers.

I don't much like the person he appears to have been, from the little I've read about him.
An anti-semite (possibly due to his German roots), a user of women - including some who were stupid enough to support him financially. He must have had some redeeming graces, though, for women to have wished to be used by him.

One saving grace of his, I guess, was his skill in putting words together in "special" emotionally moving ways. This is often, I've found, a skill connected to Scorpio emphasis in a natal chart...not necessarily erotically moving, something much deeper and potentially more significant than that.

I originally, momentarily confused today's post with Arthur Miller, the playwright. He, too, had a number of trysts with women, several were many years his junior, and he was simply peculiar.

You mention Henry Miller's womanizing, having patrons, and questionable redeeming graces. So many of the famous artists and writers...the creative of that era...were secondarily known for their randy life styles, multiple affairs, sham marriages, supported as misters or mistresses, etc. I'm not sure if the bohemian was peculiar to this set of creative individuals of that era, or if it was more documented by their peers.

Eileen Agar was part of that set (your post 12-12-14), and Anais Nin (one of the many lovers of Miller) had her multitudinous liaisons. They were all a very incestuous bunch of friends, acquaintances, lovers, and spouses, and boundaries of sexuality were freely exchanged between straight and gay, depending on the conquest.

Do you think Pluto in Gemini (1882-1914) or maybe the Neptune-Pluto conjunction in Gemini made this group more fickle regarding their personal and sexual associations?

mike (again) ~ LOL! When I first saw his date of birth in a list I confused him with Arthur Miller too - didn't mention it in case I sounded seriously unedificated! ;-)

Their era was quite peculiar in many respects, especially among the arty farty crowd. It could maybe be seen as the grandparent-era of the 1960s "love-in" times.

I think Pluto/Neptune in Gemini was the reflection of these spicy goin's on.

There were some superb writers and communicators of all types (many without the extra looseness and erotica ) from the Pluto in Gemini era - I've often noted it. Think Ogden Nash, Dorothy Parker, James Thurber, E.B. White, H.Allen Smith,
John Steinbeck etc etc etc.
(All favourites of mine too, some of my earliest posts featured them.)