I came to be reading about Jean, Duc de Berry in a roundabout way. The Duc, medieval French nobleman, close relative of Kings of France, born in Vincennes, France on 30 November 1340. I'm supposing that date is according to the Julian calendar then in use, which makes his date of birth in our Gregorian calendar some 8 days later (for 1340). He was still a Sun Sagittarian, also with Saturn in Sagittarius, and maybe Mercury too. The Duc was famous for his enthusiastic patronage of the arts. His huge collection of beautiful or rare objects and works of art reflects a Sagittarian penchant for excess - and generosity. He lived in a dark era, the Hundred Years War with England raged throughout, as did the Black Death, a plague which eventually killed between 75 and 200 million people. The Duc no doubt hoped to find that "crack where the light gets in" via his avid love of the arts.

It has been written that Jean de Berry had an interest in astrology. This, indirectly, is what led me to read about him. The Duc became patron of three artist brothers from the Netherlands: Paul, Hermann and Jean Limbourg, all born sometime between the late 1370s, early 1380s into a family with artistic talent. The brothers entered the service of Duc de Berry in 1408. Between 1412 and 1416 they created a beautiful, now world-famous, illuminated manuscript for the Duc: Les Très Riches Heures (roughly translated, The Magnificent Book of Hours). The three brothers all died in 1416, as did Jean Duc de Berry - no doubt victims of the plague then devastating Europe. The uncompleted part of the manuscript, possibly the last month of the year and general embellishments, were finished by other artists.

Vibrant colours used in the manuscript, and elsewhere, were from paint prepared from minerals, plants or chemicals, mixed with either arabic or tragacinth gum to bind. Vert de flambé, a green made from crushed flowers mixed with massicot, and azur d'outrême; an ultramarine blue made from crushed lapis-lazuli are two examples.

One section of Les Très Riches Heures comprises 12 paintings representing each month of the year. Such a monthly depiction was a common inclusion in Books of Hours, Christian devotional books popular in the Middle Ages. The Limbourgs added to each of their depictions of medieval French life through the year, a relevant portion of the zodiac circle. Also included in the manuscript was a piece of artwork most astrology buffs will be familiar with: The Anatomy of Man 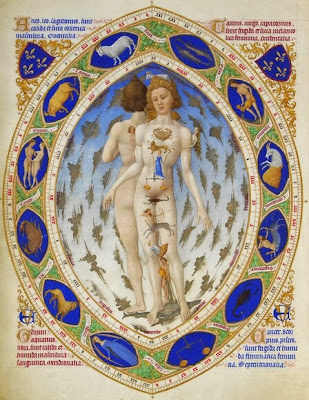 
The two human figures are derived from Italian Venus motifs. It is not certain whether the brothers encountered these motifs during their travels in Italy, or in one of the many sketchbooks that made the rounds throughout Europe during the Middle Ages. The graceful posture, also known as the S-posture is characteristic of the period, and today is usually referred to as 'International Gothic'. The painting depicts two people - a young woman with blond hair and a young man with dark hair. The purpose of this picture is to show which constellations influence the various parts or organs of the body. It is a veritable crash course in medical astrology. The texts in the four corners connect the constellations with the four humours that determine human character as well as the four heavenly wind directions and the two genders (male/female).

For all twelve illustrations of the January to December illuminations, see this Wikipedia page , and click on each of the small images for enlarged versions. Here are two samples, one showing peasant life, the other life for the aristocracy.


I followed the link to see the other art.. You had already chosen my favorite.. The Feb. scene - Rustic Painter.. Not sure to find one large enough to use as a screensaver. I really like it.
thanks for another great post, Annie.

Happy Friday Ya'll
43 and lots of liquid sunshine here in nc this morning..
I'm wrapping packages and sipping on very berry tea. cant make cookies cause the air is too humid and they wont come out right.

wishing you all a great day.
Sonny

((little OT))
I've been feeling very tender the last few days and tears fall before II even realize they're going too.
I know folks use the phrase, heart on your sleeve but this is more like emotions just barely below the top layer of skin and if touched, they would break the skin and be on top.
I tend to be emotional anyway but this is much, MORE.

Just needed to get this out, so thanks for letting me say it here, Annie..

He had a very long life, more than twice the average years for that era. Reading his Wiki entry reminded me of the extreme political turbulence Europe endured, accented with the plague and "the little ice age". That portion of time must have been one of the most stressful centuries of the past thousand years.

He died bankrupt in large part from patronage of the arts, but I suppose that the uncertain times he lived allowed a detachment from the material affairs. Couldn't count on heirs to survive, so there was minimal point to passing fortunes to progeny...might as well spend it now on things to deflect from an uncertain existence.


Dang...the weird captcha cryptogram from the past has returned today! The link I provided in yesterday's comments stated that Google had devised a new method of identifying commenters that would bypass the requirement for any anti-robot proof.

Sonny ~ Glad you liked the wonderful artwork of Limbourg Bros. It's amazing to realise how long ago it was created!

Our weather this morning could be best described as "dank", not cold (60*) but grey and dampish; seasonal for OK I suppose.

(O/T) Maybe your emotional tenderness has a lot to do with the time of year. Christmas-time, for all its jollity and purported goodwill, often brings with it an overload of nostalgia, even pain - it does for me. I often find myself with a lump in my throat, blinking back tears, when at other times of the year I can think about the same things, but with enjoyment of the memories.

Maybe listening to some very non-seasonal, non emotional music might help, Sonny, a bit of old-fashioned Outlaw Country perhaps (Waylon's always a good bet for me).

mike ~ Not a fun century at all! If ever it became possible to time travel to the past, that'd be one era to avoid at all costs! Jean de Berry did the best he could with what he had, I guess, and who could blame him. He lived a charmed life in many ways, in spite of what was going on around him.

Re catchpa etc - Maybe Google/Blogger are trying out different new versions to find what's best suited to each of their enterprises. If so, no doubt more changes will follow. Flippin' nuisance!

Sonny - Bear in mind that we are at a full moon, exact at 7:28 AM EST Saturday. Your natal Moon is in Cancer and the sign of Cancer is ruled by the Moon...a good placement for the Moon, but it can make for lots of tears and heavy emotions, if you don't direct that energy (don't allow your emotions to rule your consciousness). All full Moons will affect you...and the monthly variation of the Moon's travels through the signs will impact you more than most. Keep a diary and correlate your entries to the Moon's daily position. The Moon transits each sign about every 2.5 days.

Also, your natal Moon is currently being affected by some heavy transits, primarily Uranus-Pluto square. LEARN to deflect your emotional self via more conscious (Sun) efforts...things that keep you in the here-and-now, material world.

Next month's full Moon will be conjunct your natal Moon and will bring-in the Uranus-Pluto square (plus square the Moon's nodes). It can be assuring to recognize that we are responding to astrological aspects and that we do have more control than we might first think. Each of us has to learn how to direct these energies into positive, constructive use and benefit. Or, at a minimum, know that a storm is coming, so batten-down the hatches...LOL...the storm will pass and skies will clear.

Read-up on the astrology of individuals with their Moon in Cancer...much is available on the internet.

google is bent bound and determined to track folks and so they change up how they do it- but they'll never give up doing it..as Annie stated so well, they are a "Flippin' nuisance!"

********
I always loved waylan , willie and the boys:)
so I'll finds of their tunes and let them play in the background while I work on a new baby...
hmm not sure I ever mentioned to ya;ll what I do.. I make ebay templates for sellers,, blogger headers for blogs, and I create reborn dolls..
I'll go grab a link to show ya cause thats easier than trying to explain :)
it will be a blog link- so if you have a comment- post it Here.. hoe thats ok annie. mike cant comment on my blog..
back in a few

hopefully one of these using photobucket will..

anyway they start out as just a piece of beige vinyl= they are heated and manipulated till the features are those of your personal choosing. then painted 7 different coats of paint and each coat is heat set/baked in.. when totally painted and cooled they eyes and lashes are added- they the rooting of the head har begins. it is done with a supper fine rooting needle ONE HAIR AT A TIME:) yep seriously one freakin hair at a time so super close up it still appears the hair is coming right out of the scalp. they are sold in the US and various other countries.
I just wanted to share with ya'll..

thanks Mike about the moon infor..
wanna tell me some about the 14'5 thing lol.. should I be concerned:)

well those links dont work either-- so sorry.

Sonny - Only the second link worked. Looks like a real baby, but you stated that you make these (artificially...LOL). So life-like that I didn't know it was ersatz.

Sonny ~ Gosh! Well, that's pretty much "Arty Farty" work that you do!
I could get 2nd link to work, then I went to Google (Image) and put Savannah babies dolls in the search box- it brought up lots of examples.
Lovely stuff, must take a lot of concentration!

(PS -I have a Waylon CD playing as I type)

I have natal Cancer rising but not certain of the degree, it'd be somewhere from mid sign onward, possibly a bit later than 15*, but that Saros cycle thing rings a bell for me. The mid 1990s had lots of different challenges for me, and I've thought often that my foot problem (and a few months earlier scalp problem) are a kind of repeat of some of what happened then, health-wise. Worse things happened too, which I trust will not repeat!!!! This is why I don't like looking at my own transits very often. My relocated ascendant is in third decan Aquarius, that could help - maybe.

rut roe-- all those arent mine Annie.
my ebay nursery was names
savannahs sweeties...

lots of doll makers will name their baby savannah but I didnt make those:)

just didnt want to take credit for all those folks work.. in 7 years I have only made 211- to date.

thank you both for your compliments- that made me smile..

here's a little sleeper..
yes I am the arty farty girl I guess.