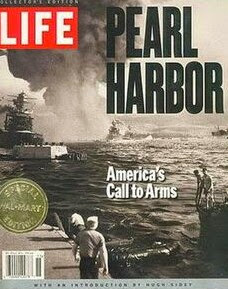 
On Sunday morning, December 7, 1941 America's naval base at Pearl Harbor, Hawaii was attacked by aircraft and submarines of the Imperial Japanese Navy, killing 2,403 American military personnel and civilians and injuring 1,178 others. The attack sank four U.S. Navy battleships and damaged four more. It also damaged or sank three cruisers, three destroyers, and one minelayer. Aircraft losses were 188 destroyed and 159 damaged. (Wikipedia)

That infamous event happened 73 years ago. Since then it has been portrayed and interpreted numerous times in literature and in film, from different perspectives. From Here to Eternity remains, for me, the most memorable movie of that genre. Somehow the unexpectedness of the attack seems more real and perceptible, set against otherwise soap-opera-like, and eventually unimportant, slings and arrows of everyday life inside a US military base near to Honolulu.

I was fortunate enough to spend three weeks in Honolulu, Hawaii, on vacation in 1984. From the UK we took advantage of a "3 weeks for the price of 2" offer. It was an unforgettable vacation, during which we did the Pearl Harbor "thing" created for tourists: a boat trip around Pearl Harbor with narration coming over a loudspeaker, pointing out significant locations and the oil slicks still (since 1941) rising from sunken US naval vessels. The tour culminated with the throwing overboard of a large wreath of white blossoms, in remembrance of all those lost that day in 1941. Not a dry eye on board was there at that point! I did have photographs, but all were lost in the fire that took all our possessions some twelve years later.


Below: “Battleship Row in Flames” a large painting (40 in. x 60 in.) by John Hamilton, widely acknowledged as an accurate and thoroughly researched portrayal of the Sunday morning sneak attack by the Japanese Carrier Striking Task Force. See HERE. Click on image for a clearer, enlarged view. 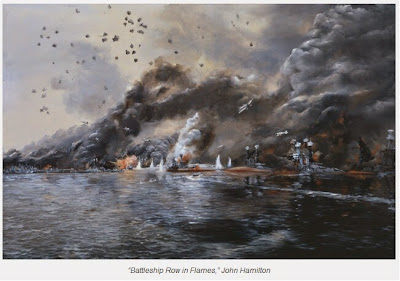 Astro.com has a chart for the date and time of the attack on Pearl Harbor HERE. I haven't yet found a standard interpretation that satisfies me. The chart is a bit odd considering what it represents - perhaps it'd be better to look at Hawaii's "natal" chart or the US's chart for the same time, and compare. Any thoughts?


LATE ADDITION: natal chart for Hedeki Tojo Japan's military leader at the time of the attack on Pearl Harbor. It's set for 12 noon on his date of birth, according to Wiki: 30 December 1884 in a part of Tokyo. 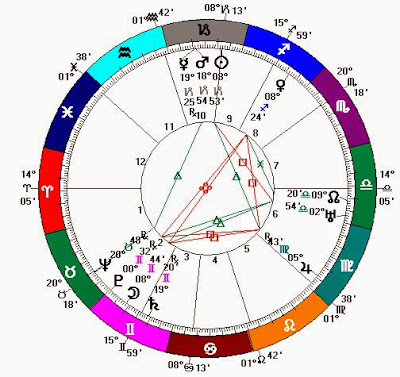 Note - in the chart linked above for Pearl Harbor at the time of the attack, Saturn and Uranus are in late Taurus at 23 and 27 degrees (close to Fixed Star Algol). In Tojo's natal chart Pluto and Neptune straddle the Taurus/Gemini cusp conjunct Saturn in the Pearl Harbor chart. I don't know whether this is significant, but thought I'd throw it in.

The typical, bizarre, mass-murderer's astrological natal vs transit chart is used to depict the incident and present a view of astrological, maniacal behavior...rarely are the victims' charts utilized to support the incident (but there is probably a correlating astrological influence present in those charts, too). Maybe Japan's chart should be investigated for the bombing of Pearl Harbor.

The Astro-Databank chart you linked has a surprising proximity to the Sibley USA chart...just rotate it to a 13* Sagittarius ascendant...so, the Pearl Harbor chart is an approximation of the USA chart, assuming one uses the Sibley. That places the Sun right on the ascendant...a waking-up. The Sun opposes Jupiter on the descendant, expansion of open enemies. Pluto and Moon in 8th house of death, with Pluto conj the natal N Node. Neptune conjunct midheaven...deception and unaware, plus Neptune rules the sea. The nodes were involved in Pearl Harbor and 9-11-2001 with Pluto and Neptune, with aspects to the nodes. A number of other aspects.

It's worth reading Rudhyar's explanation of the Sibley chart, particularly the correlation of Uranus' S Node on the ascendant, "the Ascendant at Sagittarius 13º is exactly on the South Node of Uranus."
http://www.khaldea.com/rudhyar/astroarticles/riddleusahoroscope.shtml

I bet those folks thought the world as they knew it was coming to an end.
in many ways, I suppose it did..

when 9-11 happened, same feeling only more so because it was truly on american soil..

I'll go look at the link you posted Mike..
I wanted to thank you both again for your information and suggestions about this and any full moon.. Knowledge is power and that along with acceptance is what I feel I get here from Ya'll.. what a wonderful gift~!

as I said the other day my daughter was born on dec.7 and what a world changing day that was for me.

I the data for Japan is near correct, according to Wm Stickevers, Taurus was rising as Japan was "born", and on 7 Dec 1941 Uranus and Saturn were both in Taurus at 27 and 23 respectively (both retrograde).
Not ecactly conjunct the time of"birth" rectified by Stickevers, but possibly significant?

Re the comparison to US Sibley chart - yes, that's interesting - and quirky! I'll go read the article you recommend in a mo. I usually like the Armistead chart for the US, but I know that Sibley's is the most widely accepted.

Sonny ~ Yes, it'd have been felt as a true and very surprising body blow, especially coming so early in the morning too - even earlier than was 9/11.

Your contributions are always valued, Sonny, thank you. Oh, and Many Happy Returns to your daughter!

The Sibley chart gained acceptance with 9-11-2001, as Pluto crossed the Sibley ascendant, which most interpreted as "fitting". The Armistead chart has different houses, but all planets except Moon are nearly identical placements as the Sibley. Makes differentiation difficult. The transits of 12-7-1941, make the same aspects to Sibley and Armistead.

Without astro software, I'm flipping tabs back and forth between charts, so I can easily miss something. I see less compelling aspects in the Japanese chart than I do the Sibley. The Saturn-Uranus conjunction in Taurus on 12-7-1941, does light-up several aspects in the Japanese natal. No idea how the progressed charts look for any of this, either.

Something that stands-out more than almost anything for the transits of 12-7-1941, is what a bunch of trines and sextiles, but with several potent oppositions that I wouldn't expect to depose the trines-sextiles!!! Except for the Venus opposition to Moon-Pluto, it would have appeared to be a day of pleasantry. Not so, when viewing the transits relating to the natal Armistead or Sibley natals. Just goes to show that no matter how good the transits, someone will be having a horrid day!

How's the foot problem, Twilight (other than a reminder of the mid-1990s)? Have you fully recovered from the antibiotic poisoning?

The wife of a longtime friend of mine has had some extra aches and pains the past several months...was just diagnosed with cancer that metastasized and was given six months! She's in her early 50s...their only child is 14.

mike (again) ~ I'm missing my old astrology software too - what I use at present is just about as basic as possible - makes it awkward to compare charts easily.

What happened on 7 Dec 1941 was such a "game changer" that I wouldn't have expected it to prove quite as elusive to pin down astrologically - but astrology isn't always 100% reliable, or straightforward. Maybe Uranus was working "undercover" that morning. ;-)

All those trines and sextiles are strange in the circumstances. I wonder if Fixed Stars might throw a light. How about Uranus and Saturn on either side of Algol, the demon star, in the chart I've linked in the post???

Thanks for asking about the foot problem. I have to see the doctor on Monday for him to assess whether the cream and tablets he prescribed a couple of weeks ago are doing any good. I think they are - but slowly.
The tablets are supposed to take several weeks, even months to have full effect on leg arteries. Anyway there IS some improvement, and I've recovered from those horrible anti-bio side effect problems fully now.

Oh - that's so sad for your friend and his wife, mike. How awful!
Fred's son-in-law has some serious health problems at present too; waiting for a fairly serious procedure he developed pneumonia and the op had to be postponed. It's a worrying time.

My stuff is/was minor in comparison.

This may only complicate:

I'm wondering why there isn't much available on the internet about the astrology of 12-7-1941. Quite a bit available regarding other wars.

Good to know your foot is holding its own...perfect excuse to make anyjazz your personal gofer.

mike (again) ~ Indeed - it does complicate. ;-/
I started reading that piece before I prepared the post, and gave it up part-way through. The thought I often mention kept going through my mind:
'using astrology you can make anything mean anything'.

I too was surprised at the dearth of astrological pieces about the Pearl Harbor attack, and concluded that astrologers didn't want to admit that the chart for PH at the time of the attack isn't exactly fitting for the event.

I'd feel happier if more astrologers would admit that astrology isn't always spot on, and that floundering around trying to find obscure ways to prove something is not going to do astrology a lot of good in the eyes of onlookers. If it ain't there it ain't there. It's disappointing, but it's the (or an) exception. Exceptions are allowed in life.

This might also be an example of something I used to write in posts a few years ago - I'm very wary about "natal" charts for non-human entities - countries, companies and suchlike. I'd prefer to believe that astrology, a natural phenomenon not understood but often seen working, works best (or even only) on flesh and blood beings. In which case should we really be looking at the Japanese leader's natal chart??

mike (again) ~ I've added a natal chart for Tojo - couldn't find one online. Don't know if it adds or complicates, but worth a try. ;-)

As Prime Minister, he was directly responsible for the attack on Pearl Harbor, which initiated war between Japan and the United States, although planning for it had begun before he entered office.