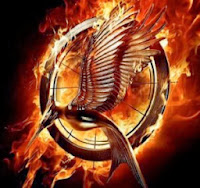 We half-enjoyed the original Hunger Games movie (well, I did); a post about it is HERE. We saw the first sequel, Catching Fire, at the weekend. I was disappointed in it, yet glad to have seen it. At two and a half hours it was far too long. Much of the first third (maybe half) could have been condensed without losing a thing. In fact, I think that this part of the story could easily have been included in the first movie, perhaps making that a real epic-long presentation, to be followed by a sequel of one blockbusting climax movie incorporating the whole of the last novel of Susan Collins' trilogy. But I'm forgetting the $$$$$$$$$$$$$$$$$. Hollywood has to, and does, spread the filthy-lucre-making material as thinly as possible. Why make two long movies when four will make double the dosh?

Without giving too much away, this sequel is set in Panem (USA in the far future) one year after the original film - time for the next Hunger Games. In intervening months downtrodden people of the districts, inspired by the defiance and bravery of heroine Katniss Everdeen (Jennifer Lawrence), are themselves experiencing the first rumblings of defiance and contemplating resistance to the totalitarian Capitol. Panem's President Snow (Donald Sutherland) has been watching this development with concern. He declares that the coming 75th Hunger Games, rather than drawing new young "tributes" from the districts to fight each other, will involve instead all living victors of former Hunger Games. Naturally that includes Katniss and Peeta (Josh Hutcherson), her Games partner. Snow is going to make sure Katniss, now a beacon of hope for the people, will not survive. He has ways....he also has a new manipulative Gamemaster named Plutarch Heavensbee. (Dang, but it sounds as though Susan Collins, author of the novels, picked her characters' names by drawing syllables out of a hat !) Plutarch Heavensbee is played with his usual class by Philip Seymour Hoffman. Woody Harrelson, I was happy to note, returns in the alcohol-sodden role of ex-victor and benign mentor Haymitch. 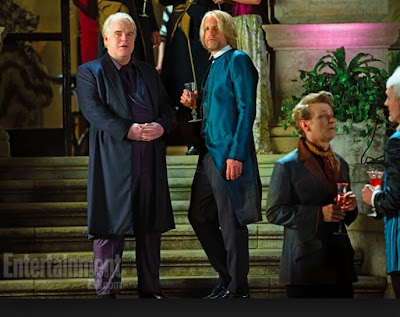 The 75th Games are followed in the movie in much the same way the 74th were followed in the original, though this time the competitors are older, thus removing some of the obscenity of seeing children being forced to destroy other children.

There's more in the way of techno-tricks and CGI this time around, a much bigger budget was available, obviously. I didn't find that additional expensive bells and whistles added much, more decent dialogue would have been better.

All in all, Catching Fire didn't move on far enough to make the movie satisfying for me. As I've mentioned already, I reckon most of its content could have somehow been incorporated into the first movie. The real and satisfying nitty-gritty will come next - a revolution proper, it will be I guess. It'll be 2 years before that hits our screens though, if reports are to be believed. By then, will we care?

My husband wasn't impressed by Catching Fire. He thought it too relentlessly dark, and found several continuity flaws in it. For instance, how come Katniss always had enough arrows? Did she have a magically replenishing supply? It seemed so. Perhaps this was explained in the first film - we can't recall it if so. The other two possible major flaws can't be explained without giving too much away. I did see one flaw myself (but am not sure whether it was explained and I missed it). At one point there's a plot element involving a clock; President Snow orders it be spun around, moving the crucial 12 noon point to a random position. But from the way the action proceeded it didn't seem to have made any difference.

There was a particularly cringe-worthy scene, outside of the games arena: at a celebratory reception at the Capitol. Elites were all decked out in ridiculously overdone outfits, wigs, makeup etc. like some nightmarish pantomime cast, with mountains of specially prepared exotic foods piled around the place. When encouraged to try a certain delicacy one of the victors declined saying he was already full to bursting point. An elite character then offered him a glass of liquid promising, "this will solve that problem". I can't remember the rest of the dialogue, but the liquid, on offer to all, was being used to bring about the urge to vomit, so that more food could be sampled and consumed. (I bet they did stuff like that in ancient Rome!) The true horror of that scene lay in the fact that out in the districts people were starving, and have, for 75 years, been forced annually to send their young out to compete to the death on the chance of obtaining extra food for their district during the coming year.

The whole thrust of this set of books/films is an old, old story of downtrodden masses finding their strength, inspired by some heroic figure or event. I haven't read the books, but from the two movies there is a clear intention to satirize 21st century life in the USA: our current way of life, feelings of disenfranchisement, analgesics such as reality TV, sports-madness, a tiny minority of the population holding all the wealth and all power over a majority kept in check by hunger and fear.

One oddity I've noticed in scanning a couple of comment threads following reviews of the movie: some right wingers seem to think the film is highlighting how bad life can be under a centralised state power; while lefties (including me) see it more as condemnation of what happens when 1% of the population holds the wealth of a vast nation, has bought the nation's powers of government for itself, and is drunk on its own (assumed) unassailability.

My take-away catchphrase from Catching Fire will be a line spoken by Haymitch. It'd be wise for all of us in the 21st century to keep it in mind too:


"Always remember who the real enemy is."

The movie caught my attention from all of the publicity it constantly receives: ads for the movie, the Hollywood stars making the rounds on the talk shows, the discussions and articles on internet sites, and the talk of the huge $$$ it's racked-up. It's hard to ignore the constant chatter, since it seems to come from everywhere.

I'm sure I won't see the movie...I don't go to the theaters, plus the movie series' content doesn't appeal to me, gleaned from what I've seen.

I was surprised that the trilogy is published by Scholastic. Unusual, because that publisher is known for educational book distribution, but I see Scholastic has the "Harry Potter" rights, too, and "His Dark Materials".

I would prefer the youngsters read the trilogy rather than see the movies...better for the brain, I think. But, the series is about some deep subject matter, so there's benefit regardless of form of intake. A lot of content can be lost via the Hollywood makeover of the books I've read and then viewed the movie for comparison. I didn't see the movie "Golden Compass", but I read Pullman's "His Dark Materials" trilogy and thoroughly enjoyed...many movie-only people were turned-off by "Golden Compass" and I'm sure won't read the trilogy...my sister is one from this set.

Your comment regarding the left and right viewership...always surprises me how "in the eyes of the beholder" is so apropos to most situations.

mike ~ Hard to miss isn't it?
We enjoyed seeing Jennifer Lawrence on Letterman's show a week or two ago. She's a real live wire!

I'm sure the books would be better for young adults, but as tied up as the young are with smartphones, i-pads, Tweets, Facebook, Instagram, video games and the rest of cyberland I think reading books will soon become a lost art. My own book-reading has reduced noticeably in past years, and I don't own or participate in any of the afore-mentioned stuff, just have a computer and internet connection. So if a well-advertised movie with a message of sorts can get young adults into cinemas, that has to be a good thing. Next decade even movies, as well as books, could become redundant for new generations if things keep moving the way they are at present.

So yes, as you wrote, there is benefit whatever the source of intake.

I saw "Golden Compass" - the movie. I think we've mentioned it before and I then couldn't find my old post (or maybe I did?) Here's the link again anyway - I'd tagged it under "The" instead of "Golden".
:-/

Yes, "in the eye of the beholder" works well in politics as well as in all else doesn't it? It makes it difficult to argue or debate a point too. In the case of Hunger Games' Panem and the Capitol Elite
one would have to investigate in detail (read the books?) as to how the situation there had actually been allowed, by the people, to come about.

"In the early 21st century a set of precient books and films portrayed something very close to the way history did unfold - until around..... a time of major change in the world........"

I dont go to movie theaters so I dont see things till a year or more later..
I think Jennifer is great and so funny too.

I'll be going back to look at your reviews..

wishing you a wonderful day..
Sonny

Sonny ~ We go to the movies mainly because our local is close to home. These days it must struggle to keep going, we'd hate to see it close for lack of warm bodies.

I was surprised to see how lively J-Law is "in real life". She seems unaffected by all her success too.
:-)
Hope you enjoy the movie - later on.