Music Monday ~ The Beatles just are..... 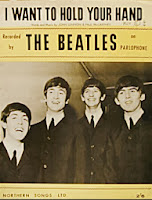 Stephen Deusner's piece at Salon last week declared: "The year’s most overrated anniversary: Quit celebrating “I Want to Hold Your Hand”....a good song, but other 1963 singles are just as important - and ignored."
Title and sub-head pretty much explain the piece. I found it difficult to see logic in the point he was making, though I do have some sympathy with the thought that there's too much memorialising going on - in general. But I guess it gives journalists something to write about other than chewing over, and over, dire circumstances of 2013, so perhaps it's not such a bad thing after all. 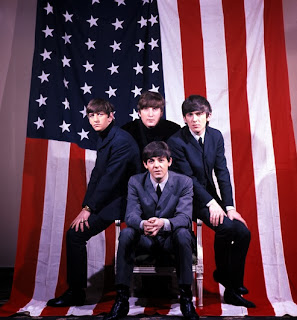 Mr. Deusner names several songs of 1963 which are never memorialised in comparison to the song which made The Beatles a household name in the USA. This was when he lost me. I vaguely remember some of the songs he mentions, but why would they be memorialised, apart maybe from the Beach Boys' single, In My room ? The Beach Boys have retained a place in public affection in much the same way The Beatles have done, though on a slightly smaller scale. Back in 1963, in the UK, I would have wagered that the Beach Boys with their far more sophisticated sound, would have beaten the Beatles hands down in USA's memorialising stakes.

I was unimpressed by the Beatles first time around. 50 years later, living in the USA, after some education on the subject from my husband and his family, I've discovered the true worth of The Fab Four - as I see it. I've come to the conclusion that their strength was as composers and lyricists, not performers. Oh, they performed well enough to delight millions of young fans. They shook their mop-head hair-dos at the screaming hordes, but sang and played neither better nor worse than many other groups of the time. The key, and the real magician, I've come to realise, was and is their former producer George Martin (a post on him is here). He issued a tribute album called In My Life on which an unlikely selection of performers put their own stamp upon Beatles music. It was from listening to this album that I understood why Beatles' music has become iconic. It has true, lasting quality, and in the hands of a genius like George Martin it blossoms, especially when performed by others. Their songs are timeless, malleable, can be performed in almost any style, by any type of voice or voices. Their music can be orchestrated for the grandest symphony outfit in the land, and has been - and is one of my own favourite ways to listen to Beatles music.


George Martin's Love album, a compilation of Beatles music re-arranged, layered, mixed and re-mixed is another example of the music's quality in the hands of a genius arranger. Again, Martin's skills, allied with Beatles' talent produces yet another perspective and opportunity to understand why the Fab Four's work was so much more than appeared on its surface.

Dozens of famed performers, over the years, have chosen to include Beatles' songs in their repertoires. Sinatra sings, for me, the definitive version of George Harrison's Something . Neil Diamond's version of And I Love Her makes me love the song I'd looked on as nothing but a jingle. Johnny Cash sang In My Life; Sean Connery recited its lyrics on George Martin's tribute album - it's hard to listen to that without lump in throat.

If I had to choose a favourite song, actually as sung by The Beatles, it'd be A Day in the Life. I love the English-ness of it, and that opening line never goes out of season! "I read the news today - Oh boy!"

You know....by now the Beatles don't need more memorialising - they just are, like spring, summer, autumn and winter.
Posted by Twilight at Monday, December 02, 2013

This is a seemingly simple subject on the surface, but quite complex to me, anyway. I would be hesitant to say The Beatles were the "IT" band of their time, so I agree with Deusner's assessment that there were other tremendously talented, influential groups, too, that are equally worthy of their anniversary commemoration. I wouldn't have chosen his selections, however.

I mentioned in your JFK posting that JFK's strength was in his making the citizenry feel like there was a present and future to be had. The USA was coming out of a staid and miserable time...JFK accelerated the process. I think The Beatles had the same influence and came on the heels of JFK's demise, so they were part of the clan that carried the torch forward. Kurt Vonnegut's sidebar quote you provided has that same notion, too. An added plus with The Beatles was their ability to evolve themselves concurrent to the elan of the moment...they went from heart-throbs to radical hippies-druggies to spiritual seekers. Their music covers vast genres of popular, timeless sentiment. Never quite knew what the Fab Four were going to create next. They were trend setters and led the path of many avenues...yet they always maintained a "clean cut" charm about them...never heard about them over-dosing or trying to slice their wrists.

Other tremendously talented mucsical groups at that time tended to remain within one style, possibly verging on a second. Too many to name, but many influential musicians that will not be forgotten for a while.

I prefer to think of the 1960s and 1970s as a distinctive era...in itself worthy of much recognition and anniversary celebration. Too many cultural influences during those two decades to ever narrow it down to the most important or most significant...all co-evolved and each required the other to succeed. The Beatles were just several large brush-strokes on the canvas.

P.S. - The groundwork of change was well underway prior to the advent of The Beatles, both musically and culturally. Elvis Presley had much to do with revolutionizing the body movements accompanying his music and initiating a cultural change of dancing style. The "Twist" followed and the American youth were thought to have been possessed by the devil. THEN came The Beatles. A good movie to illustrate this is "Hairspray".

OK, another P.S. - I just browsed your "Music" selection of your cloud...many fine musician-authors there, many with songs from the 1960s! I was after Sam Cooke and Bob Lind, but found so many others.

The Beatles had captured the ear and imagination of the public and had fans poised waiting for whatever the group had to offer. Then Lennon and McCartney began serving up exciting morsels from their own imagination that weren’t all rock or pop or sometimes anything else that could be named. And the public gathered it up. There were many talented musicians and composers running parallel to them which deserve credit too. So why do the one hit wonders and other talented musicians seem generally forgotten to many?

The decades since the sixties are sifting out that difference. It seems the Beatles music and the poetry that have the longevity, not necessarily their performances of them. I recently put together a collection of over 560 cover recordings of Beatles music. And that was only a scant few of the covers of the Beatles “songbook”. There are thousands.

This then, takes them from the hallowed company of composers like Carol King, Leonard Cohen and Billy Joel and shifts them more toward the level of Cole Porter, Irving Berlin and George Gershwin. It’s the volume as well as the quality of their creativeness that sets the music apart.

The current developing generation will possibly put a deep cut into the legend. We have seen them on talent shows announcing they propose to sing “Respect by Aretha Franklin.” Well, “Respect” was written by Otis Redding. Franklin recorded it. We have heard them say they had difficulty singing the song “Eleanor Rigby” because they had never heard it before. The generation seems to be shrinking into the vacuum of “living in the moment” social networks, forgetting the encumbering past and avoiding the frightening possibilities of the future.

Well said, anyjazz! Roy Orbison is another talented great, both writing (some co-written) and singing his songs.

mike and anyjazz ~ Many thanks for your views, which can stand, really, as an extension of the post itself, and require no argument from yours truly.

My own roll of honour of memorial-worthy singers/songwriters has to include Simon and Garfunkel - their songs and performances (mostly Simon-written) can stand up easily against anything the Beatles did, just not as prolific.

Neil Diamond was always one of my favourites too, but for some reason was considered kind of "uncool". Never understood that.

Bob Dylan is already memorialised quite a bit, deservedly.

I told a friend recently that marking the 50th anniversary of The Beatles on TV was like marking the beginning of time for me. I remember a little about the Kennedy assassination (not the right things -- I was 5) and I remember sitting on the floor watching The Beatles on Ed Sullivan, my Dad saying, "That drummer looks like a pancake-head." To this day, I don't know what he meant by that.
I'm glad you've come to appreciate The Fabs. I am fascinated by the way they continue to entertain.
I will concede, though, they were more a product of all the right elements coming together at the right time. The same could be said of Bill Gates, Steve Jobs, and their cohorts. The same could be said of certain weather events ...
I must quibble a bit: Most of the work on "Love" was done by George Martin's son, Giles. There is a great interview about the process here: http://www.npr.org/templates/story/story.php?storyId=15960894

Kaleymorris said...
This comment has been removed by a blog administrator.
December 02, 2013 7:55 PM

Kaleymorris ~ (I removed the duplication btw). Blogger can be a pain at times. :-)

We're still up, simply so Himself can see Paul McCartney on a repeat Jimmy Fallon late show, plugging his newest CD "New!

Thanks for your input - I know you are a dyed in the wool Beatles' fan, as are most of the family.

Thanks for the correction re George Martin's son and the "Love" album. I will still maintain, though, that George M. was the genius who set the Beatles on the road to becoming the icons they are today - even with half of them long gone. If Brian Epstein had lived, I'd wager the Beatles would now be as well-remembered in the USA as.... erm...Jerry and the Pacemakers.
;-)

this has nothing to do with the post. It's a bit of spam (sorryyyy!).

Dunyazade ~ Hi there! Spam from a blog-friend isn't spam anymore - so thanks for your link.

(I thought "Who the heck is Prince George?" Had a look and realised I'm way out of the loop. Will enjoy a good read later.) :-)

But please keep in mind that I'm not a native English speaker ;)

Dunyazade ~ You do a great job with a 2nd language though! :-)

I do agree that The Beatles would not be The Beatles without George Martin. He truly was the fifth Beatle and he was indeed a necessary element to their success.
Do try to listen to the interview when you have a spare half hour. I think it is really interesting ... and funny.

Kaleymorris ~ Himself and I have just listened to the interview together - very interesting! Thanks! :-)
Son came over as a personable but quite unpretentious guy!