Horses. Today, December 18, second day of Saturnalia in ancient Rome, marked also the feast of Eponalia dedicated to Epona. Epona, originally a Celtic and Gaulish goddess, was patron deity of horses, and the whole equine family: donkeys, mules, ponies. Those working with these animals also came under Epona's protection. Worship of Epona was widespread across Europe and Roman Britain. As well as a holiday and festival in her honour, a temple in Rome was dedicated to her and shrines to Epona were commonly found in stables.

Epona's Celtic/Gaulish origins are understandable. Ancestors of the Gauls of Northern France and of the Celts came from nomadic tribes who spread from the East throughout Europe. Horses, for them, were of prime value in facilitating travel. Later, in ancient Rome, the horse in war - one of Rome's favourite pastimes - became priceless. Even later, and for centuries on, horses became a natural dynamo of agriculture. So, a means of transportation, a symbol of wealth and power, a part of religion, and a necessity in war and in agriculture - no wonder horses were eligible for their own goddess!

The Greeks, never shy of inventing a good story, had a tale about the birth of Epona. A Greek writer, Agesilaos, came up with this: Epona was the daughter of a man named Phoulonios Stellos, who, not interested in women, mated with a mare. That mare gave birth to a human-shaped daughter, Epona.

Though I've never had much to do with horses myself, I do enjoy looking at 'em - I have a small collection of horse sculptures. Maybe a little of the ancient horse worship is in my genes. My two maternal great-grandfathers worked with horses as both grooms and carters, a discovery made while researching my family's history.

Here are a couple of my horses, and a painting by my husband: 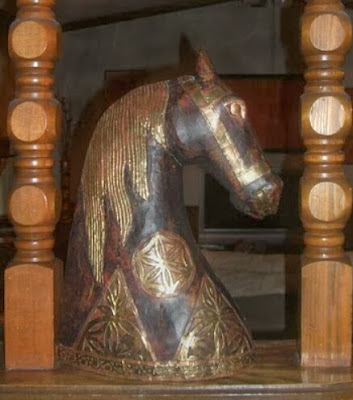 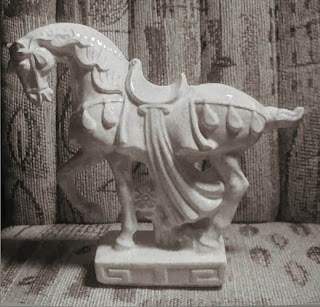 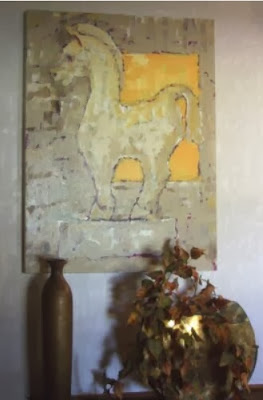 Posted by Twilight at Wednesday, December 18, 2013

“There is something about the outside of a horse that is good for the inside of a man.” Winston Churchill

I've always enjoyed Winnie-the-Pooh's friend, Eeyore, the pessimistic donkey! Members of the Equidae family are beautiful creatures, specially those zebras, but all have suffered the "beast of burden" syndrome bestowed by humans. Where would we be today, without them?

Did you ever travel to Uffington to see the "White Horse", Twilight?

And another reason to celebrate:

"Slavery Ended 148 Years Ago Today, But We Still Have A Long Way To Go

mike ~ Oh yes! Gotta love Eeyore -and all his pals too!

The White Horse (name of many pubs in England also!) Now... I did have it pointed out to me (at a distance) once, but so long ago that I can't remember how or who or how come.

I didn't ever travel especially to see it, so it must have happened when I was working in hotels down in the far south-west of England and was either travelling back north or visiting some venue near Uffington - Cheltenham perhaps, went there a few times. Mists of time blurring my memory on this. I wasn't particularly interested in such things back then - late teens/very early 20s.

And you reminded me of one of my favorite quotes (which has nothing whatsoever to do with this post).

"Outside of a dog, a book is man's best friend. Inside of a dog it's too dark to read." Groucho.