Music Monday ~ Garth Brooks is Back! 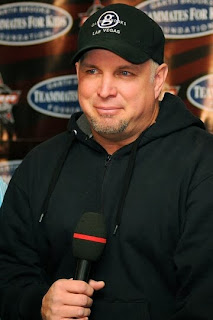 CBS recently featured a 2-hour (including commercials of course) recording of a version of Garth Brooks' one-man Las Vegas show which had been running in that glittering city for some time. He had previously been in semi-retirement for years, concentrating on bringing up his three daughters.

For me the TV show was a revelation. I've been a fan of Garth Brooks since he first shot to fame in the 1990s, even in the UK where country music was then very much a "fringe" interest, on the fringe as usual, it was one of mine. I had no idea, though, that Garth Brooks was such a bundle of infectious enthusiasm and humour!

Two hours flew past, with just the guy and a guitar taking us through his musical education, with tales of his mother's and father's input, snippets of classic songs from a variety of genres (rock, pop, blues, soul, singer/songwriter) from the 1950s, 60s, 70s, 80s with a few of his own early offerings. Great stuff it was, probably the best thing I shall watch on TV all holiday season!

The CBS TV programme was, no doubt, an advertising gig for GB's new 8-dic (six-CD and two-DVD ) box set marketed through Walmart for a very reasonable sum of just under $25. I might be persuaded to enter Hades (Walmart) to buy me that item - along with a couple of packets of McVitie's Digestives - English taste in cookies has to be fed, Hades or not!

If the TV show is repeated and any passing reader enjoys popular music from the 1950s onward, even if not a country music fan, do take a look - I could almost guarantee you'll enjoy!

All of which sent me digging around in my blog's archives for anything I'd written about Garth Brooks in the past, including some astrological thoughts. I found these:


The Palin/Brooks Phenomenon
and
4 Sons of Aquarius

Here's a brief recent interview with Garth Brooks, about the show.

Digging further - there's this: Brooks has something to say about politics in the USA.
Nice one Mr. B!

I'm not a fan of Garth Brooks, but many of my friends are. I've followed his career over the years and he's impressive...many awards and the number one leader in recordings sold for quite a few years.

He has an MBA, which he puts to good use in his business. His net worth ranges from 100 to 350 million US$ CASH, plus many investments and properties of unknown total value. He apparently knows how to camouflage his wealth. He lost a lawsuit filed by a business partner claiming Brooks owed back wages and bonuses...the partner claimed Brooks had a public persona extremely contrary to reality.

His efforts to gain royalties from used, resold CDs had me concerned. He had much to gain with his efforts, but I'm certainly relieved he failed...the ramifications could have been monumental toward all resold items. He's also taken heat for his efforts to control ticket sales to his events, putting him in the league of ticket agent.

His successful lawsuit against the hospital in Yukon, OK, was a bit strange. The suit was in the news frequently, so I did follow it. The written contract he had with the hospital wasn't in agreement with Brook's claim, yet he won the case, which left me baffled.

He does have involvement with several charitable organizations, which is nice. He doesn't seem to over-do his contributions, though he is a mid-level member of the 1% club.

Anyone in the public arena is vulnerable to scrutiny. Brooks doesn't have a horrid rap sheet like many other entertainers, but I've just never been impressed with his music or business efforts.


Garth always made me a little weak in the knees and oh baby, he's still got IT..

as or his lawsuits and rights to what he ever made as HIS, well he's a 7 and they can be persnikerty about such things..
giggle.. ask me how I know all about 7's.. :)

mike ~ As I've probably mentioned before, I tend to take entertainers at face value. If they entertain me, haven't, as far as we know, abused women, men, children or animals, then the rest isn't my business. Although if they think roughly along the same lines as I do about political matters that's a cherry on top, but isn't an essential.

I was interested in the information you've outlined though it certainly won't prevent me from enjoying his singing, and admiring his songwriting skills. :-)
I'm nowhere close to being perfect in all things (or in anything) myself and don't expect others to be either.

Sonny ~ Glad you enjoy him. :-)
I don't know what "a 7" is (numerology?), but as he is a mega-multiple Aquarian, they are likely to be as bloody-minded about certain matters as anyone on the planet.

I'm much as you described in your comment...I try to take entertainers at face value. I'm sure that if I liked Garth as much as some of my friends, that I wouldn't have written what I did in my first comment. Easy for me to be critical when I don't care!

Entertainers, the rich, and sports heroes (basically boils-down to RICH!) tend to have special privileges and can receive preferential treatment. This can sometimes preclude those individuals from public scrutiny and-or legal accusations and-or convictions. This is often accomplished by hiring very high-priced lawyers.

As you stated, if they don't harm anyone, who cares? It can often be difficult to determine whether they've done harm! Quite a few of the famous have had accusations thrown their way, but were acquitted in a court of law: Michael Jackson and his two molestation trials; Halle Berry's two hit-and-run incidents with personal injury (probable DWI); Robert Wagner's involvement with Natalie Wood's death; OJ Simpson, Robert Blake, Claus Von Bulow...wife murder; Lindsy Lohan (any number of incidents); Winona Ryder, Farrah Fawcett, Britney Spears, to name a few in the shoplifter club, etc.

The rich can hire the best lawyers...some are acquitted, but publicly chastised, others are acquitted and publicly cherished. Many rich people simply pay-off the victim and it all remains a secret (Michael Jackson, Arnold Schwarzenegger, et al).

It pays to hire the best lawyers, if you want to be innocent and not proven guilty!

mike ~ Happily I feel about all those listed as you do, more or less, about Garth Brooks, i.e. I don't care. :-) In fact the only one I'm able to recall anything about is the Michael Jackson thing - that was hard to miss. I avoided OJ Simpson reports like the plague, back in the UK, I'd never heard of him anyway.
The others - well, I might have read the odd headline, but didn't take much note of more because I had no interest in the "celeb" involved.

You're right about the lawyer thing though. "Money can't buy you love..." but it can buy you a skilled and crafty lawyer with few principles and excellent connections.

Here's a fun, short film for your pleasure..."Next Life" by Casimir Nozkowski:

mike ~ Thanks - I enjoyed that!
Wonder if that's what'll happen...if not through handshake but some other embedded memories. Nice thought.
:-)