Vintage group photographs among the collection of husband, aka "anyjazz", are often easy targets for his and his Flickr commenters' sense of fun. Three of the many I've enjoyed are below, with a sample of comments:
(Clicking on the images will take you to bigger versions at Flickr). 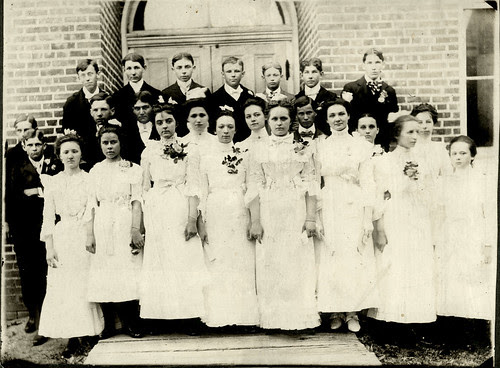 Sonja was found later, reading a Pottery Barn catalog and singing AC/DC melodies softly to herself.
Most people joked that Sonja just had her girdle laced a little too tight. Years later, her physician Dr. Barley Kornn, (Col. USP retired) discovered that her girdle was exactly the problem. Freed from her life-long affliction, Sonja changed her name to Candy and married the good doctor. And although her personality adjusted considerably after her cure, she retained her ability to discuss politics with the squirrels at the town park.

Poor Sonya, born too early for ritalin. Or cognitive therapy. Let's just say she marched to her own drumstick. 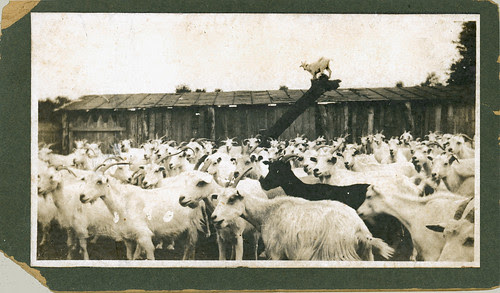 Dear Mister Jazz I suppose this is what you call 'ART' in your neck of the woods. Well let me tell you we don't go for these 'instillations' tomfoolery round here. My four year old daughter could do better. Yours sincerely Phillis Stein.

Dear Phillis Stein: I am pleased to report that both Art and Tom are recovering fully from their unfortunate encounter with your umbrella. By late next year, they should be back to work at your tea tray factory, instilling carrot soup in cocoanut pillow packs. (And other meaningful work your fertile mind might devise for them.) I think your daughter could certainly do better too but alas, we can’t choose our parents. And that's "Doctor" Jazz in this neck of the woods. Yours sincerely Herb Essence.

No funny comments, but lots of scope for the imagination! An enlarged version (click) brings out a variety of expressions and emotions. These people could be the cast of some vintage daytime soap opera....."Home on the Strange"? Husband had added that it's a "unique family picture. Some of them are actually smiling" (unusual in vintage photos) "And somebody later on had scratched out the face of the woman near the center post. Must be a story there."


Caption:
We had all the kinfolk over fer Thanksgivins.
After dinner the parsnip wine went over well. 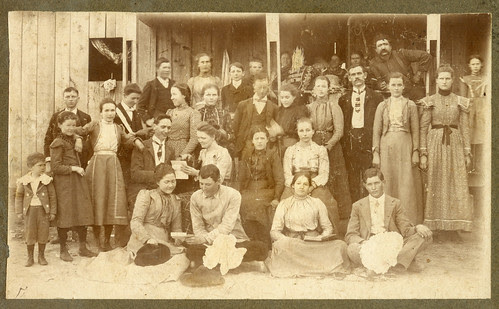 “For me the noise of Time is not sad: I love bells, clocks, watches — and I recall that at first photographic implements were related to techniques of cabinetmaking and the machinery of precision: cameras, in short, were clocks for seeing, and perhaps in me someone very old still hears in the photographic mechanism the living sound of the wood.” Roland Barthes, Camera Lucida: Reflections on Photography