I've no idea how I came to land on a 7 May post at Ian Welsh's eponymous blog, but having done so was immediately drawn in by the subject matter and a thread of 70+ very good comments. Post heading: Will a man on horseback come to rule America?"

Early on, among the comments, Mr Welsh explains that "man on horseback", here relates to a “heroic right wing figure, usually military."


"The archetypical man on horseback was Napoleon. The man on horseback promises to cut through all the bullshit, to make things work again. Mussolini is another one – make the trains run on time. When people get tired of a society that doesn’t work, they will turn to a strong man (or someone they think is strong), to just make society work again."

For the USA such a situation could easily come to pass, sooner or later - later rather than sooner I think, in the absence of dire catastrophe. It's a vision of the future I'd prefer not to entertain, but then, men on horses could, occasionally, be of a different ilk. Real life examples of genuinely benign men on horseback have been few and far between, mythical or fictional ones are easier to come by. 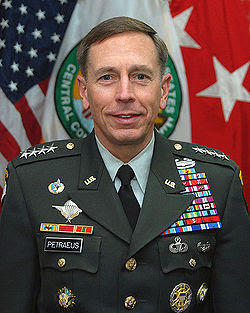 Among comments the name of General David Petraeus, current Director of the CIA, is mentioned more than once as a possible "man on horseback" for the USA. Does he have the astro-credentials for such a position? Without a time of birth for him it's not possible to calculate an exact natal chart, but here's a 12 noon version for 7 November 1952 when he was born, in Cornwall-on-the-Hudson, NY. 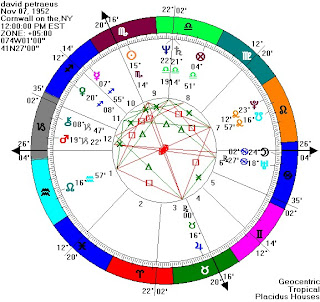 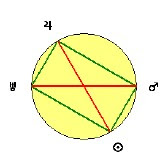 A quick note about the man himself: well-integrated, nicely balanced personality; as far as I can tell he's no megalomaniac, though Scorpio Sun indicates a passionate and determined individual. There are several planetary configurations, one standing out clearly for me is known by astrologers as a Mystic Rectangle (though not mystic, just evidence of fine integration). This links Sun/Mars/Jupiter/Uranus in a configuration involving harmonious trines and sextiles together with 2 balancing oppositions. Planets involved relate to self(Sun), energy/dynamism/war (Mars), philosophy/expansion/excess (Jupiter), and rebellion/revolt/change (Uranus).

Now, here's General Petraeus's chart in centre of a bi-wheel with the USA birthchart - the version I use - in the outside ring, (chart for the day the die was cast for the birth of the USA, 2 July 1776.) 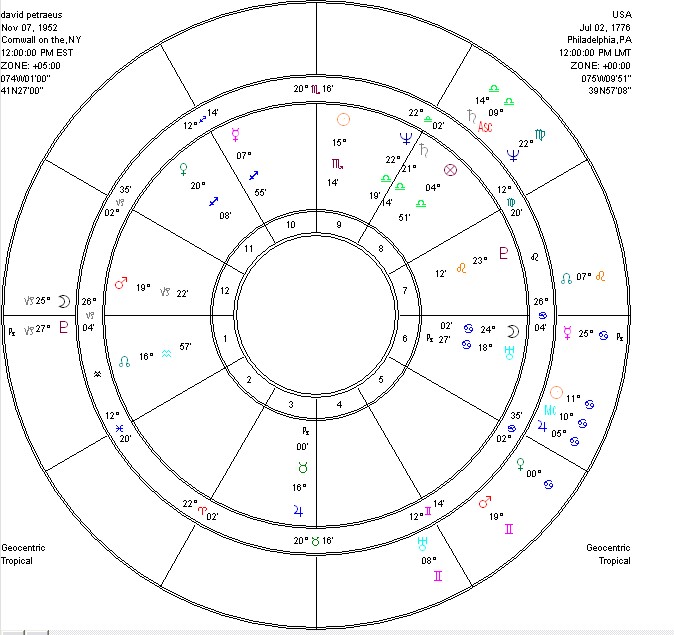 Petraeus's Uranus (unexpected change) is, at 18 Cancer, within orb to be considered conjunct the USA's Sun at 11 Cancer.

At noon the natal moons are opposing one another across Cancer-Capricorn....cardinal signs, his Moon likely conjunct Uranus, US Moon conjunct Pluto.

His Venus in Sagittarius is opposed by US Mars in Gemini.

Although there are astrological links here, I am not confident that it all amounts to a hill of beans. But it is another interesting theory upon which to keep a wary eye.

Whatever happened to the idea of the return of the matriarchy. These men on horseback scare the bejeebers out of me.
XO
WWW

To be honest, I don't wish to see a matriachy any more than a patriarchy, I want to see a
people-archy. :-)

WWW .....am not seeing your blog today (same yesterday) the page is blank. I'm not sure whether this is a blip on my side or if you've taken it down?

Im finding Blogger slow to load - maybe they are mesing with it, or working on that blasted new interface.

Correction....I'm finding Blogger slow to load - maybe they are messing with it while working on that blasted new interface.

Scary is right....when I looked up "Man on Horseback" in the dictionary this is what I came up with..
man on horseback
n. pl. men on horseback
1. A man, usually a military leader, whose popular influence and power may afford him the position of dictator, as in a time of political crisis.
2. A dictator.

...and I surely won't get into the whole "apocalyptic" area of the four horsemen.

DC ~~ No we certainly don't need the 4 Horsemen, we'd have enough to contend with if just one (of the wrong kind) arrived. ;-0

We could think, though, more in line with Bob Dylan's "All Along the Watchtower". Two riders were seen in the distance, with the implication their aim was to upset the comfortable lifestyle of The Princes and their ilk ~

All along the watchtower
Princes kept the view
While all the women came and went
Barefoot servants, too

Outside in the distance
A wildcat did growl
Two riders were approaching
The wind began to howl..............

Petraeus is more establishment than the establishment. A career soldier turned chief of secret police is definitely not the sort of man we need to lead this country. There is no-one - no-one - among the present shower in and around Washington, that's even fit to sit on a horse, let alone ride one.

RJ Adams ~~ Agreed, if the man on a horse were going to be benign. But in the case of another Napoleon or Mussolini (as mentioned in the article/comments linked) I think there are several who could ride the horse to perfection. I'm not sure Petraeus is one of 'em though....he doesn't strike me as being mad or narcisistic enough. :-)