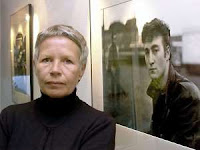 On Sunday, 20 May, Astrid Kirchherr will celebrate her birthday ...."Who' she?" I hear a passing reader mumble. Now in her 70s, she's the photographer who first embedded a vision of The Beatles into the consciousness of a world much wider than Liverpool and Hamburg.
(Photo above from DPA.) 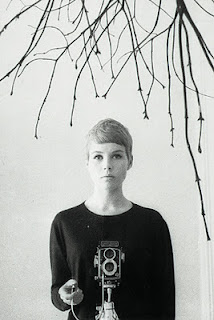 (Right: 1960s self-portrait by Astrid Kirchherr).
A photographer and former art student originally heading for a career in fashion design in Hamburg of the early 1960s. She was introduced to Beatles' music by her then boyfriend Klaus Voormann. The Beatles at that time had moved to Germany seeking engagements, were playing night-long (and I do mean l-o-n-g) in clubs in Hamburg's notorious Reeperbahn, surviving on alcohol and drugs to fuel their marathon sessions. 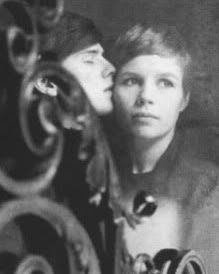 Ms Kirchherr was immediately drawn to the lads and their rock and roll music, especially to their then bass player arty Stuart Sutcliffe. The attraction was mutual.....she found him somehow different from local young males, he saw in her, with her all-black clothes and beat sensibilities "the real bohemian". She soon became fast friends with the band and, eventually, fiancée to Stuart Sutcliffe. She was the first photographer to treat the Beatles phenomenon as something iconic - her photographs retain this feel 50 years later.

Ms Kirchherr is often credited with designing the Beatles' famous "mop-top" hair styles. She admits to persuading Sutcliffe to exchange his Brylcremed quiff for the style then favoured by her ex-boyfriend Klaus and many of his German contemporaries, the "mop-top". The other Beatles followed eventually, Paul and John needing the most persuading.

Stuart Sutcliffe died befor he and Kirchherr could marry, his death came tragically early from a brain hemorrhage, thought to have been brought about by a head injury sustained some time before.

Astrid Kirchherr's other photographs didn't similarly enthuse the public, but her studies of The Beatles are still exhibited all over the world. She abandoned photography as a career around 1967. She has had three books of photographs published; a movie, Backbeat, tells the story of her emotional association with Sutcliffe.

Not wanting to fall foul of copyright regulations I'm wary of posting images of Ms Kirchherr's photographs, but hope that I'll be allowed just one example here (if not I shall remove it post haste upon being asked to do so). More can be seen via Google Image. 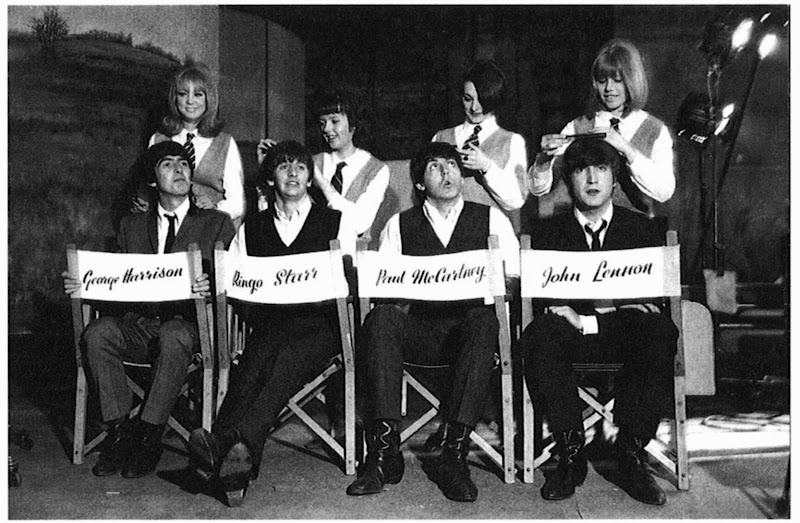 I found a couple of related videos, the first is an interview with Astrid Kirchherr herself, the second composed by a fan.


Getting to astrology - at last - I'm interested to see how Astrid Kirchherr's and Stuart Sutcliffe's natal charts relate to one another, bearing in mind the couple's instant attraction.....so 12 noon charts follow: 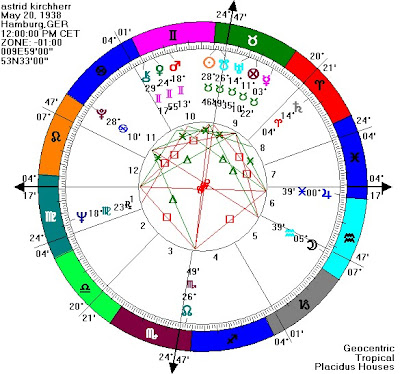 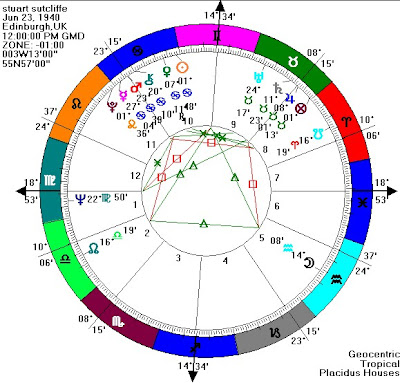 It's not possible to calculate exact charts without birth times, but these planetary positions at 12 noon will be accurate, apart from Moon's degree.

The immediate and strongest link I see is that both their natal Moons were in Aquarius, unless Ms Kirchherr were born in the first hour of 20 May....Moons could quite easily turn out to have been conjoined, in fact.

His Uranus conjoins her natal Sun, her Mercury conjoins his Jupiter and Saturn in Taurus.

A potentially dark shadow falls on the zodiac circle at around 25/26 Taurus where unfortunate Fixed Stars Algol and Capulus are found. As both charts have planets in this vicinity I'm wondering whether the tragedy and heartbreak involved in their love affair echo this.

Ms Kirchherr has Jupiter (publication) in Pisces, the sign ruled by Neptune, planet linked to photography, and along with her Sun/Mercury/Uranus in Venus-ruled Taurus this reflects her natural artistic bent. Sutcliffe, also artistically inclined, had three planets in Taurus too. Actually, many of the Uranus in Taurus generation turned out to have interest or talent in arty directions. I'm one of that generation and though I've no talent for drawing or painting I've always been interested in, and attracted to anything/anyone a wee bit arty.
Posted by Twilight at Friday, May 18, 2012

I live and learn from you T, fascinating portrait of Astrid.
XO
WWW
PS And you see you've been spammed.

Nice. I remember seeing her in the Beatles Anthology DVD. Fascinating that the Jupiter in Pisces aspect was in the Astrid's chart and also Fashion genius Poriet, as well as the Orson Wells chart, which you may remember I pointed out in that (Poriet)posts comments.
Cheers T! :)

Wisewebwoman ~~ And I from you WWW!
:-)
Yes, this spammer eluded Blogger's usually efficient spam-net. Now he's filed in the garbage bin.

DC ~~ Thanks. We watched that DVD set not long ago - her name didn't clearly register with me at the time though. Whenever we give the DVDs a second airing I'll watch for her.

Ah yes! Good job in spotting the Jupiter in Pisces link again, DC.
I have that too, and in exact semi-sextile to my Aquarius Sun. I have been known to blame my interest in tarot and astrology on that.
;-)