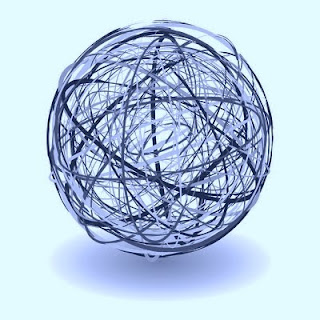 There are no straight lines in the zodiac or in planetary movement. There are cycles, some so huge that we never, in one lifetime, return to the point in the cycle from which we set out as a living being. Others, such as the cycles of the Moon, come around many times, even in a comparatively short lifetime.

In the circle of the zodiac, around which our planets and lights travel, the first and last signs are opposites, they are also neighbours. Aries, the initiator, full of energy, impatient to get things started; nextdoor is Pisces the loose, visionary dreamer in no hurry to "haul ass".

Circles don't have extremities, only departure and return points, which means that extremes flow into one another.

What follows one extreme is the other extreme - not moderation of either.

In the case of political opinion, the further left or right one moves in entrenched viewpoints, the more liable one is, without even realising it, to be assisting the very causes one started out opposing. For example: the more extreme right-wing, totalitarian or fascist a government becomes, what follows eventually will reflect the other extreme: revolution, extreme left-wing reaction.

"Extremism is so easy. You've got your position, and that's it. It doesn't take much thought. And when you go far enough to the right you meet the same idiots coming around from the left." ~ Clint Eastwood
(Interview, Time Magazine, February 20, 2005)

Something we can agree on. :)

The needle in the haystack! :-)