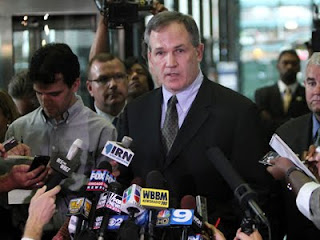 One public figure in the United States I can admire without reservation (and there are precious few) is US Attorney Patrick Fitzgerald. He has been in the news once more this week, this time announcing his decision to step down from his post in Northern District of Illinois after a stint of 11 years. From the end of June he intends to take the summer off before considering other job possibilities.
(Photo: Getty Images)

His 24-year, often high profile, career has included prosecuting terrorists, mob members, corrupt governors and a presidential aide - we can only guess at what job offers might be forthcoming. Possibilities mentioned here and there on the net would be to replace the current FBI director whose term will end in September 2013, or U.S. attorney general under a new administration. 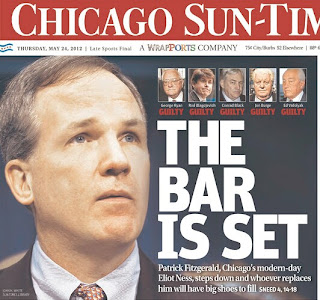 Mr.Fitzgerald has never made his own political leanings known. He prosecuted Republican Governor George Ryan and Governor Rod Blagojevich, a Democrat, with equal zeal.

On Thursday, speaking to reporters he said, "For the office, it's important that there be change. I thought this was the right time." Asked about future plans, "I don't know, and that's sincere," he told reporters. "Public service is in my blood."
(Photograph: Chicago Sun Times)

Fitzgerald's parents came from Ireland's County Clare, they met in the United States, raised their son in Flatbush and guided him to a scholarship at a Jesuit high school. He worked as a school janitor in Brooklyn to make money for college and spent summers opening doors at an upscale co-op building on East 72nd Street in Manhattan. His father worked at a building on East 75th. Fitzgerald says he remembers where he came from and pinches himself when he realizes where he is. "The values we grew up with were straight-ahead. We didn't grow up in a household where people were anything but direct," Fitzgerald says.

I've posted before about Patrick Fitzgerald -this comes from a 2008 post....

A writer called Fitzgerald an "Untouchable", in the mould of Eliot Ness ."The Prosecutor Never Rests", an article by Peter Slevin from 2005 gives a flavour of Patrick Fitzgerald's personality.

"His thoroughness, his relentlessness, his work ethic are legendary," says terrorism expert Daniel Benjamin, a former member of the National Security Council.

Seeing Fitzgerald in action, says Los Angeles lawyer Anthony Bouza, a college classmate, is "like watching a sophisticated machine." Colleagues speak in head-shaking tones of Fitzgerald's skills in taking a case to trial. A Phi Beta Kappa math and economics student at Amherst before earning a Harvard law degree in 1985, he has a gift for solving puzzles and simplifying complexity for a jury."

"The staff of the 9/11 commission called him one of the world's best terrorism prosecutors. He convicted Sheik Omar Abdel Rahman in the 1993 World Trade Center bombing and all four defendants in the embassy bombings, which had left 224 people dead. He extracted a guilty plea from Mafia capo John Gambino and became an authority on bin Laden, whom he indicted in 1998 for a global terrorist conspiracy that included the African bombings"

"People who know Fitzgerald describe him as anything but a stuffed shirt. During a key moment in one New York trial, he slipped a note to his co-counsel, who interrupted questioning to read it to himself. It said, "Is there beer in the fridge?""

"He's no slouch at stagecraft, either. At the trial of a Mafia hit man, the defense argued that a ski mask -- part of what Fitzgerald called a "hit kit" that included surgical gloves, a gun and hollow-point bullets -- was really just a hat. (The defense also said the surgical gloves were for putting ointment on the defendant's ailing dog.) During closing arguments, Fitzgerald startled the jury by rolling up one leg on his lawyerly dark suit. "These are just shorts, ladies and gentlemen," he said, according to one account. "These are just shorts." 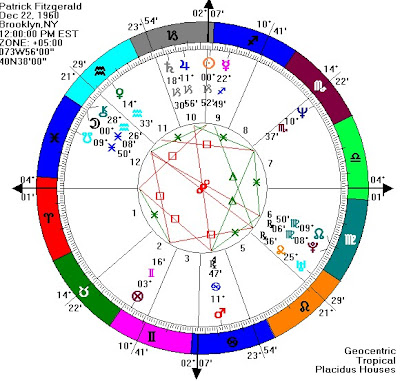 Chart above is set for 12 noon as no time of birth is known. 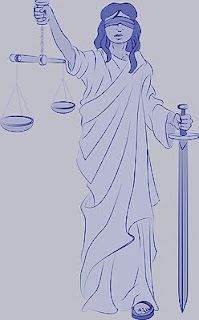 I was confident I'd find Saturn and/or Capricorn very prominent in Fitzgerald's natal chart, and I wasn't wrong.

Sun, Jupiter and Saturn itself are all in Capricorn. Saturn is ruler of Capricorn, both are connected to law, as is Jupiter. Saturn and Capricorn represent the discipline, rules, and structures of law. Jupiter and its sign of rulership, Sagittarius represent the judgement and philosophical aspect of law and justice.
Very apt - and evidence of astrology in action - again!

Mercury at 22 Sagittarius harmoniously trines (120*) Uranus at 25 Leo - Intuitive mind with independence of thought - somewhat ahead of his own time.

Mars at 11 Cancer exactly opposes Jupiter at 11 Capricorn - indication that he seeks out challenges, has to temper a tendency to go over the top at times, but because Saturn is positioned close to Jupiter, such tendencies are held in check, and emanate in Fitzgerald's case mainly as the excess zeal for which he is famous and occasionally criticised.

The Moon's position can't be pinpointed without time of birth, but it would lie somewhere between 22 Aquarius and 6 Pisces. If born before noon (my bet) it was in Aquarius, along with his natal Venus. Analysis is key to his work, and that's a strongly Aquarian trait.

This is the kind of guy we need as president, but as long as he returns to some public office, it'll feel reassuring that good things and good people do happen here.... sometimes.
Posted by Twilight at Saturday, May 26, 2012

An Irish prosecutor - destined for greatness.