Susan Boyle's natal chart has been interpreted already by several astrologers. Here's a link to one interpretation I enjoyed, by Robert Blaschke, who makes a very interesting point about her pre-natal eclipse, and in a footnote, points out that Barack Obama had the same pre-natal eclipse.

Susan's Sun/Moon opposition in Aries/Libra forms what astrologers call a T-Square via two 90* angles to Mars in Cancer - the pattern clearly highlighted in the chart at the linked article. Aries, Libra and Cancer are cardinal signs, and signs about to be highlighted in real time by transits of:
a) Uranus moving into Aries in mid-2010;
b) Pluto already transiting early Capricorn - this the cardinal sign opposite and therefore affecting Cancer;
c) Saturn now in Libra, though it will slide back into Virgo again, for a period before taking up long-term residence in Libra.

I see those factors as metaphorically "pushing Susan's buttons" through her natal T-square. Even though transits are unlikely to conjoin her planets exactly at the same time, long-term emphasis is going to be on the relevant signs. The next few years will surely bring the realisation of her dreams, the culmination of a lifetime's wait. T-square formations are no piece of cake though. There'll be challenges, a lot of hard work and loss of privacy. I feel sure that Susan has wise advisors around her to help steer her through any difficulties.

Jupiter transited early Aquarius in the first months of this year, just at the point where Susan's natal Jupiter lies - that would have been the early days of, or preparation for, the TV show, Britain's Got Talent. She was runner-up after votes were counted, but seems to have already outshone the winners. She had, at a very opportune time, lucky planet Jupiter back in the position it was when she first entered this world. 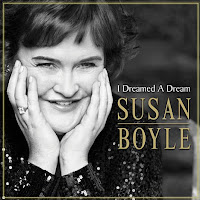 Susan's first album, "I Dreamed a Dream", will be released on 23 November. According to a piece in the UK's Daily Mail in September:

"... the success of Susan Boyle's first album is now beyond all doubt, after it topped Amazon's bestsellers list - nearly three months before release."

Go get 'em, Susan! Wild Horses can't stop you now. In fact, if your new single is anything to go by, they'll carry you aong in their wake.
Posted by Twilight at Saturday, November 07, 2009

I'm having trouble with the 'glamming up' of Susan, T.

As if she wasn't just quite good enough the way she was.

WWW ~~~ A bit of spit and polish is okay, I think - and some nice new clothes - she''l enjoy that too. As long as they don't go too far and try to make her lose weight and have plastic surgery, that'd be all wrong!