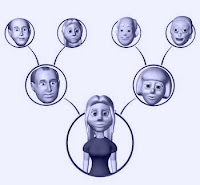 The dear husband noticed me looking bored and blank at the computer, devoid of inspiration. Helpful as always, he invited me to partake of his subscription to Ancestor.com. "You're part of the family", he reminded me. Yes indeed! I'd have been the last of my line if I'd tarried in Yorkshire, a childless gal and an only child myself. Now, by marriage I'm part of a chain again - albeit a link late and loose - a link nonetheless.

I began with some misgivings, for my father's side of the family I'm missing essential information. I'm not sure exactly where my paternal grandfather was born. Never mind. I made a start on the easy ones, two fairly unusual surnames from my mother's side made tracing back to the early 1800s and late 1700s fairly painless, though a little confusing at times. They had such big families in those days, ten and upward was the norm. Common first names tend to be repeated a lot in families too (John, Elizabeth, Mary, Sarah, Edward, Charles.....) It's very easy to get into a muddle. A sad sidelight was how many infant deaths there were. One family line I noticed had three successive offspring marked "died as infant".

Nothing very exciting emerged though. Nobody famous or infamous, apart from two men with my maternal grandfather's fairly unusual surname shipped to Australia on a prison ship for "machine breaking". My ancestors were sons and daughters of the soil, the lot of 'em, at least until my grandparents and their offspring found their metaphorical feet from the mid 20th century on. Still, as a researcher into one of my family names quoted:

"Whoever could make two ears of corn or two blades of grass to grow upon a spot of ground where only one grew before, would deserve better of mankind, and do more essential service to his country, than the whole race of politicians put together." (Jonathan Swift)

My forebears came from Hampshire, Wiltshire, Yorkshire, and possibly Suffolk, not a townie among them. Agricultural workers, ploughmen, grooms, labourers, domestic servants, cooks, farm manager, and a flour miller. Offspring from my parents' generation changed all that though. As far as I know, not one of my many cousins is still engaged in farming, instead there's a doctor, a couple in teaching, secretaries, an actuary, a couple of government workers. Improved opportunities in education and better health care for all after World War 2 in the UK were instrumental in opening wider opportunities to the Great Unwashed (eg: National Health Service, free higher education, nationalised public transport and utilities.) Scared of socialism anyone? It worked well then, for us.

Others have been researching their family history for years, in depth. Some can reach as far back as the Middle Ages in England. One of my family's surnames belonged to a rather swisher class, way back - landowners and Lords of the Manor types. I think my particular branch of that clan must have peeled off onto a side road somewhere and got themselves seriously lost!

One individual of the same surname as my paternal grandmother had gone as far as having his genome analysed. Apparently the Y chromosome he carries (it's carried only by the male line) links back to some of the original farming tribes of humankind. I'm more than a bit wary of this, to be honest, but dutifully did a little more research.

It's pretty mind-blowing to consider that we've all, every one alive on this planet today, descended from a relatively small group of humans. It's useful to keep in mind though, when we start investigating and magnifying our differences.
Posted by Twilight at Sunday, November 22, 2009

Tracing your ancestry can become an obsession for some. Fortunately I have a couple of cousins one on each side of my family that have that interest so we're pretty well served for at least 3 of the family lines. James family to the 16th century and Shuttleworths to the 17th. I'm an Anglo Scot with a bit of Welsh and Irish thrown into the cooking pot! Well with red hair, white skin and blue/grey eyes the Celtic heritage is a bit obvious. And Fionna means "white girl" in Gaelic so there's no hiding from it really.

The one I love the most is the Scottish side of the Clan MacKinnon. It is supposed to go back to the 7th century when the founders of the clan travelled from Ireland to the Isle of Iona with St Columba. Then onto the Isle of Skye were they have been in "residence" ever since.

We have one story that is quite fascinating of a female MacKinnon ancestress who Napoleon was supposed to be enamoured of. She though spurned his advances but there were letters that she is said to have had burned after her death. At the time it was known that Napoleon allowed the Scots to pass through France though he was at war with England. I always wonder what would have happened if my ancestor had said Oui to the Emperor rather than "not tonight I've got a headache" Josephine...

PS I'm Anonymous as I'm using a friends laptop while my PC is in "hospital" and I can't remember my log in details for my Google Account.

Sounds pretty similar to my background. Except that my ancestors have been, really, living in the woods up until the early 20th century.

In Finland it's usually possible to trace back ancestors to the early 18th century using the parish registers. The older registers were largely destroyed during one of the Russian occupations. But if the ancestors owned land, in some parts of the country one could go back to the 15th century, even if many records were lost again in the fire of the Stockholm Three Crowns castle.

Hmmm - that's considerably more glamorous than I've been able to drag out of the mists of time!
:-)

I'm back to the early 1600s on a couple of lines, still in the same general area of Yorkshire - not great travellers it seems. :-)

It's a big time waster really, but makes a change from reading blogs.

Candela ~~~ Ah - a fellow rural-ite! Our roots are firmly planted in mother earth! ;-)

We're pretty lucky in the UK and USA in that there are lots of records still available, and over the years others have researched and put their findings on-line, to help others.

In years past it was a case of travelling around to see parish registers and census returns in situ. A much harder hobby to follow than it is now.

Sad to read that so many records in Finland were lost.

Back in the 1950/60s I used to work in a County Record Office where historical documents were stored and catalogued from all over the county. We had a regular flow of people coming to look at documents to trace their family's roots.

Now it's a matter of a few clicks and scrolls, and a lot of patience. :-)

The Mitochondrial strand is interesting, going back to a small tribe in southern Africa, if I remember correctly. Some scientists made a slight error, though, in dubbing the target of the strand the Mitochondrial Eve. Some people thought all sorts about that one.

It is amazing how few homo sapiens we're all descended from. I forget the actual number, but viewing the world today certainly confirms that old adage about inbreeding causing madness. :-)