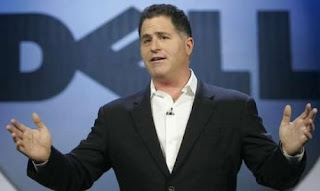 Tomorrow will be the 25th anniversary of the founding of the company now known as Dell Inc. "born" 1984, at that time under the name name "PC's Limited". Dell is now an international corporation employing more than 76,000 worldwide. It was the brainchild of Michael Dell, whose estimated net worth in 2009 is 12.3 billion dollars - in past years it was anything up to 20 billion dollars. The American Dream personified! He is ranked #9 of the 400 richest Americans.

Michael Dell wasn't academically gifted, but had an early talent for business, and an understanding of computers. Wikipedia tells us that "at the age of 15 he broke down a brand new Apple II computer and rebuilt it, just to see if he could". He amassed some capital by selling subscriptions for a local newspaper, bought a car and three computers, then later dropped out of university, and with some extra capital acquired from his family founded PC's Limited. The company grew. It was exactly the right time for it, and in the hands of a guy who understood what customers wanted and how to deliver, it became one of the USA's most successful in the field. Michael Dell began selling computers custom-made to the requirements of his customers at a time when the concept was unknown. The system has been a success, for it's still the basis of Dell's trading.

I'd have expected a guy with such innate business sense to have a strong Capricorn presence in his natal chart, but, unless he has Capricorn rising, it's not there. I haven't been able to establish his time of birth, so a 12 noon chart is below. 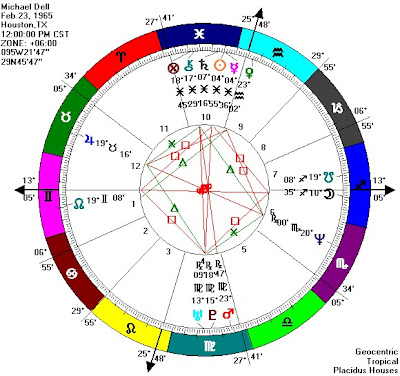 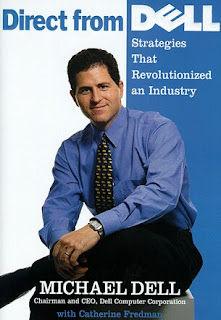 Dell's personal planets are in Pisces, Aquarius, Sagittarius, Virgo and Taurus.
There's emphasis on the Pisces-Virgo axis, as Pluto/Uranus/Mars lie opposite Pisces Sun/Mercury/Saturn. Any dreamy imaginative traits of Pisces are balanced by this opposition from Virgo's perfectionism and work ethic. Venus in Aquarius, the sign of technology and invention, is a link to his draw towards computers, as is the Uranus/Pluto (techology and power) conjunction in Virgo which lie opposite his personal planets in Pisces. Jupiter in Taurus lies opposite Neptune in Scorpio, which echoes once again the balance already seen between Pisces and Virgo, this time between earthy common sense of Taurus with the creativity and imagination of Neptune.

Dell's natal Moon would be in Sagittarius whatever time he was born. Sagittarius puts expansion into the picture, as well as an inner optimism which has surely been a big factor in his huge success.

When the original Dell company (PC's Ltd) was born on 4 November 1984 it's interesting that transiting Uranus at 11 Sagittarius would have been quite close to his natal Moon, and transiting Saturn just 2 degrees from natal Neptune. These links bring together technology, expansion, work, structure and creativity.
Posted by Twilight at Tuesday, November 03, 2009

Happy birthday Dell! I find it amazing how so many of these successful business people were not academic. It just goes to show it pays more to be worldly and streetwise than academic. Interesting that he does not have a strong Capricorn presence in his natal chart.

Laura ~~~ Hi there!
Ain't that the truth?!
Capricorn could be rising, I guess, or in his first or second houses or at midheaven, but, yes, I'm quite surprised there's no planet in Capricorn.

Maybe the mix of Pisces/Virgo when balanced by opposition, comes out with traits akin to those of Capricorn - a bit like mixing two watercolors and coming up with a shade quite close to another - different - color. Just a thought.
:-)