Are we not formed, as notes of music are,
For one another, though dissimilar?
~Percy Bysshe Shelley 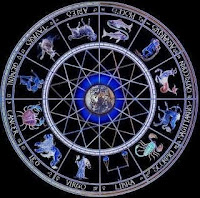 Music and astrology have quite a lot in common. Both rely on a limited but still potentially vast collection of possible content, based on a non-negotiable structure. In music it's notes on a stave; in astrology, it's planets in the zodiac. Both have a kind of mathematics at their core. In music it's the beat, the time, the rhythm - 3/4 time/ 4/4 time etc. In astrology it's 360 degrees split into 12 segments and aspects formed between them: 90 degree squares, 120 degree trines, 180degree oppositions etc. These mix with the rhythmic integrated waves of Fire to Earth, to Air to Water, to Fire....... Cardinal to Fixed to Mutable to Cardinal....

The pleasure we obtain from music comes from counting, but counting unconsciously. Music is nothing but unconscious arithmetic. ~Gottfried Wilhelm Leibniz

There's a branch of astrology known as Harmonics, which I, being mathematically challenged, haven't as yet managed to master.
Astrologer Bob Marks says : (HERE)

"This has to be one of the greatest advances in astrological analysis of the last hundred years. What are "harmonics?" Just a mathematical rearrangement of the horoscope so that we can see particular features more clearly. It's something like taking a cross-section of a sample in biology and putting it under a microscope."

Pythagoras, an early Greek mathematician and astronomer was the first to discover a mathematical relationship in the frequencies of the various tones of the musical scale. In postulating the planets' orbits as bearing a similar relationship based upon the distance from the center, he characterized their interrelated orbits as "the harmony of the spheres." (Nicholas deVore - Encyclopedia of Astrology)

So really, with a bit of imagination, each human being could be seen, astrologically, as a piece of music, a song. The exact positions of the planets, and arrangement in respect to one another, as we came into the world dictates our "tune", and therefore has much bearing on which other "tunes", real and human, we can most easily harmonize with.

There is in souls a sympathy with sounds:
And as the mind is pitch'd the ear is pleased
With melting airs, or martial, brisk or grave;
Some chord in unison with what we hear
Is touch'd within us, and the heart replies.
~William Cowper

Music is so important to all these systems. I've read about Baroque music being based in alchemy, and many mystics have allied music to their systems.

anthonynorth~~~ Yes, I think that what they, and we, sense is the edge of the tip of an iceberg of knowledge that'll emerge teeny bit by teeny bit over coming centuries.....if man survives.
:-)