We've had a new visitor to our backyard bird feeders during the last few weeks - a Painted Bunting. 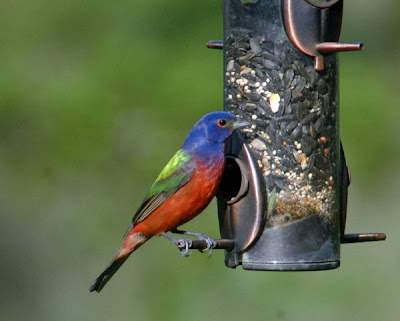 We'd spotted one only once before, 3 years ago after a storm - he'd probably been blown of course on the wind. This one, though, must have set up camp somewhere nearby because he's been visiting us several times a day.

A thought came to me as I watched him yesterday: wouldn't it be fun if we humans carried our astrological color patterns, for all to see, as the Painted Bunting carries his colors? That'd make life even more interesting. There'd be university courses and a gazillion books, teaching students how to recognise the various astrological strands and patterns in our colors.

A bit of trivia - The Painting Bunting's Latin name, used by ornithologists, is Passerina Ciris. The Greek myth of Scylla who turned into the bird keiris, inspired the name Ciris.

The Scylla referred to isn't the mythological female sea monster of the same name, but the daughter of Nīsus, king of Megara, which was besieged by Minos of Crete. Nisus was inviolable and the city safe as long as a red or purple lock among his white hair remained intact. Scylla cut it off and thus killed him in order to deliver the city to the besiegers, either out of love for Minos or because she had been bribed. Minos was horrified at the deed and drowned her (or she drowned herself). Nisus was turned into an osprey and Scylla into a sea-bird (ciris), ever pursued with hatred by her father. (See here)

Or The Trooping of the Colours - how gorgeous.
There is an award for you over at my place.
XO
WWW

Love the idea of wearing our astrological colors. I suppose those who can see auras would suggest that we do carry our colors with us, for those that know where to look. The picture is beautiful, btw.

A thoughtful post. I suppose many of us wear our astrological colours thru our personalities.

WWW ~~~ Oh my!! Thank you, thank you! That's a lovely award with which to be presented. I only wish I deserved it - but I shall try to be worthy :-) & display it with pride, then pass it on (in a day or two). Thank you again.

AN ~~~ ah yes, we do indeed. Perhaps it would be just too easy if they were displayed for all to see. Too easy to avoid someone who might teach us a lesson, or too easy to gravitate to only certain sets of people, never learning much. :-)

Jared ~~~ I don't know whether you'll see this but hope you do -
Whenever I try to comment on your blog, I'm "thrown off" and commenting is impossible.

It's strange becausw were' both on Blogger - should be easy-peasy. Has anyone else mentioned this?
I guess it could be my computer at fault, but I hanven't come across this difficulty elsewhere.

Hello Laurie - nice to "see" you!
The husband is proud of that photo - it took a lot of patience to get it - glad you like it. :-)