IDOL's FINAL ROUND - and a wee rant.

Tonight, Adam Lambert and Kris Allen will sing for the title "American Idol of 2009". I've taken a look at their charts to see whether one or other is more favoured by the planets, but first I have to get something off my chest.

In previous posts about Adam Lambert I have deliberately never mentioned sexual orientation - it ain't at all relevant, and his is certainly none of my or any other blogger's, commentator's or journalist's business. Those in higher places, and with more clout, obviously consider it theirs though. Ryan Seacrest and someone called Perez Hilton reportedly discussed it on Seacrest's radio show. If true, this has seriously besmirched my previous admiration of Ryan Seacrest and his professionalism. Bill O'Reilly has had a couple of attempts to stir this pot, and, surprise, surprise, threw religion into the mix as well. Writers and commenters all over blogland just refuse to leave this topic alone.

What's up America? You are supposed, by your own reckoning, to be head and shoulders above and beyond the rest of the world, yet some of you gossip and bitch like schoolkids about such irrelevancies as sexual orientation at the slightest opportunity. This is century 21! Wake the f...k up at the back there!! Some of the stuff I've read could quite easily be construed as sexual harassment!

On a calmer note, this comment from fellow-Brit, and fellow Aquarian is pleasing: Robbie Williams from his myspace blog:

“Adam Lambert is my personal bestest Pop star right now…..If you haven’t been watching American Idol check him out… he’s the real deal in fact if there was a Singing Olympics and the US where sending Michael Buble and Adam Lambert I wouldn’t even try out for the UK team…”

(Michael Buble is actually Canadian, but the thought was there!)

A Jupiter/Neptune conjunction, joined by asteroid Chiron, the mythical Wounded Healer, is above us right now, in the astrological sector of Aquarius. I'll leave it to others to decide what, if any, significance there might be in Chiron's position.(Chiron's glyph looks like a "k" atop "o"). Jupiter and Neptune, together, are saying "dream big!" That's exactly what Adam and Kris are doing.

Below is a chart showing today's transits (where the planets are right now). The chart set for this evening in Hollywood. 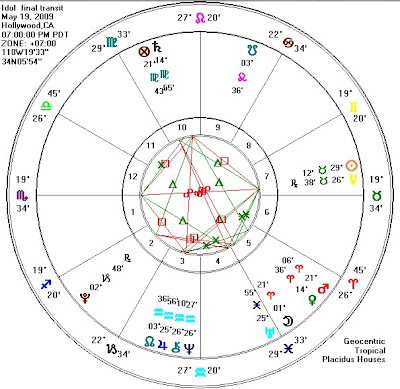 The astrology: Both Adam and Kris have planet(s) in Aquarius, though neither has a close connection to the exact degrees where the Jupiter/Neptune/Chiron conjunction now lies. Still, this Aquarian link could speak to how the two guys have made it this far - benign Jupiter, the lucky planet, will have been close to their natal Aquarian planets over past months.

Below is Adam's natal chart. He does have a couple of tricky transits going on just now: Transiting Saturn at 14 Virgo is in irritable quincunx aspect (150*) to his natal Mercury in Aquarius -not a helpful link, especially to his communications planet. This might have something to do with the gossipy scenario mentioned above. Transiting Mars at 21 Aries lies opposite his natal Saturn and Mars in Libra - this could either lend energy (Mars) and stability (Saturn) tonight, or something less helpful. That opposition certainly smacks of keen competition. 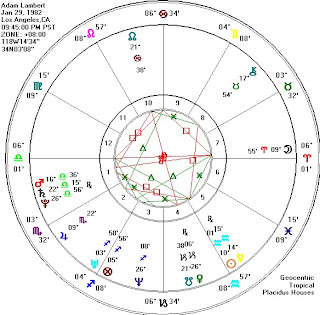 In Kris's chart, a 12 noon version below, comparing with the transit chart showing today's positions: transiting Saturn at 14 Virgo is in helpful trine to Kris's natal Venus (planet of the art and music)at 14 Taurus. That will be good for Kris. Transiting Pluto at 2 Capricorn is sextile natal Pluto at 2 Scorpio and conjunct natal Neptune at 2 Capricorn - but these are a generational aspects, affecting a whole age group; still though, these are much better than challenging aspects at this point. 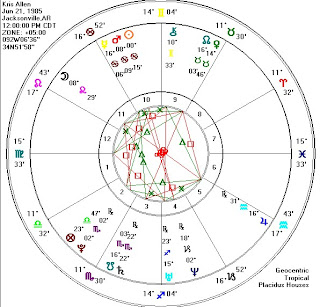 Kris will need all the help from the planets that he can get, because Adam is a huge, flamboyant natural talent, while he, Kris, is quieter, his style more subtle.

Adam, too, could use some help from above, to counteract adverse gossipy publicity. I've been among Adam's supporters from the start. He is the most talented, versatile and charismatic singer I've seen on any talent show, here or in the UK - and I've seen a lot of talent shows! Until the past few days I've felt confident he'd be the winner. Now though, I'm not quite as confident. Talent and charisma aren't always enough to impress those with small minds.

It's reported that Kris and Adam have become firm friends, their families are supportive of both their own son and each others' sons. That is so good to know. I doubt that either contestant will begrudge the other's win, and both will have careers previously beyond their wildest dreams, whatever the outcome. 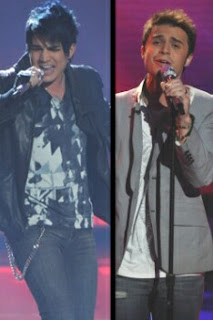 It's an unusual Idol contest this year. The two finalists are highly talented performers. In their own words they don't really care who wins at this point. They are show people and they place the entertainment above all else.

But in the end it will be the voting public that is said to decide a “winner.” Will the contest be affected by self serving, backward thinking, do-gooders out to protect the rest of us from what they perceive as a scourge? We shall see. Perhaps there is an even bigger issue here than we know.

This obsession with other's naughty bits drives me around the twist, T. The bloody irrelevance of it all. What has it got to do with the price of eggs?
And recent polls show Americans couldn't give a rat's arse. It is these evildoers that stir things up - the O'Liely's and the Limpbums.
Give the rest of us a break!
I'm with you on Adam even tho I'm blessedly TV free but I did catch a Youtube.
XO
WWW

Anyjazz~~~ I think there IS a bigger issue here. It's starting to remind me of 2008's General Election. :-(

The redeeming feature of it is that the two guys and their families are good buddies. They all are presenting a really good example - those guys are a couple of excellent role models. :-)

WWW ~~~ Agree wholeheartedly with what you've written. It's a few rotten apples that spoil the barrel, as usual. Trouble is, with the internet so universally available, the barrel is bigger, the rot spreads faster.

Fingers crossed for both the lads, that they can give of their best tonight. :-)

I'm with you, Twilight, Adam has bigger concerns than his sexuality right now, including that opposition from transiting Mars to natal Saturn. In athletic competitions, Mars/Saturn indicates an opponent that will outmuscle the competition. Sometimes the most muscley one doesn't win, though..

Shawn ~~~ Oooo-er! Kris isn't very muscley, he's slightly built, adam is over 6ft, and fit looking.
Maybe the muscley is psychological - and if so I'm betting on Adam - he seems strong minded and very "together".

I just read on a message board that a producer's choices (one of 3 songs they'll each sing) for Adam is Sam Cooke's "A Change is Gonna Come", and for Kris, "What's Going On" (Bob Marley?)

Two songs which will probably have me in tears - and so very appropriate tonight. :-)

Whatever the outcome, you usually find some politics in it somewhere. A great shame. I think it will always happen, despite the century.

Hmmmm. Where did you ever get the idea Americans think they're "head and shoulders" ahead in the moral parade? Oh, yeah, it's because we act that way and talk that way most of the time!

Thing is, despite our boasting, we're just bozos on this bus, just like everyone else. And I don't put a lot of stock in social polls, because what we say and how we actually behave are seldom the same.

Uh, am I being too cynical? Guess I woke up on the wrong side of the species today!

But that's just the view of
hybrid Brit/US citizen, looking on with, what are still, the eyes of a comparative stranger.

Twilight/all, I believe this quite insightful interview with Kris could help rectify his chart:

Continuing to enjoy your blogging; thank YOU!

Demetrius - Hi there!
thank you for the link.

I've taken a look at the article, and yes, it does contain some info. which could be useful in rectifying Kris's natal chart.

I have only a sketchy knowledge of rectification though, so can only surmise.

I've used the rectification tool on my software to see what might fit (in very general terms).

I think that the friendship between Kris and Adam is telling - there needs to be some link in both charts - some strong point of compatibility.

So far I haven't come up with anything much, except wondering whether Kris has an ascendant in a Fire sign - Aries might be good, as Adam's Moon is there. If Kris were born around 2am, Venus in Taurus would be 1st house of self (music) and Jupiter in Aquarius would fall in 11th house - house of friends, links to Adam's Aquarius Sun.

Moon in Leo would be in 4th house of home(he loves his home and home state) and Leo Moon is compatible with Adam's Aries Moon.

That's just an off the cuff stab at the unknown though


Any other ideas gratefully received.