Another Haley - with Comets 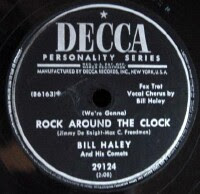 55 years ago today, 10 May, 1954, Bill Haley & His Comets released "Rock Around the Clock", the first rock and roll record to reach number one on the Billboard charts - though the record didn't actually reach top of the charts for almost a year after its release. (Wikipedia) 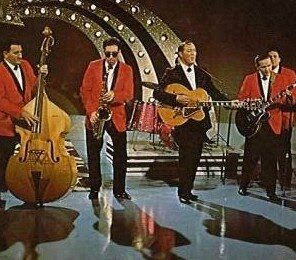 Being a Brit, I've always credited Bill Haley with birthing rock and roll proper. My 'Murican husband, and his son-in-law, Jeff, both extremely well-versed (no pun intended) in American music lore and history would tend to disagree. I'm not getting into that debate here. All I know is that Bill Haley and His Comets, with their recordings of "Rock Around the Clock", "Shake Rattle and Roll" and suchlike provided my own first exposure to the genre. I bought 78 rpm gramophone records of both numbers, enjoyed them for a while but soon tired of that incessant beat. I got it, but didn't want it! Thinking back to how that music sounded in the 1950s, and how rock music sounds today, it's hard to recognise the current crop as being an offspring of Haley and Co's work.

Although that early rock and roll wasn't my thing, the fact that it was the start of a huge wave of change in popular music is inescapable. Elvis followed, shimmying on in his Blue Suede Shoes; then Buddy Holly and the Crickets and soon, The Beatles with a flood of similar but less illustrious groups and soloists. Youth Culture had arrived - and has stayed with us into the 21st century.

Oddly, Bill Haley, one of rock and roll's true avant garde, hasn't retained much of an aura of "cool", as far as I can tell. Perhaps it's because he came from a country music background - not considered "cool", even in much of the USA. That kind of background didn't do Elvis any harm though! 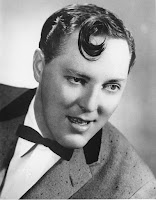 Bill Haley was born in Highland Park, Michigan on 6 July 1925 at, according to Astrodatabank, 2.30pm.
Below, his natal chart in the center circle, and a transit chart for 10 May 1954 in the outer ring. (Click on image to enlarge.) 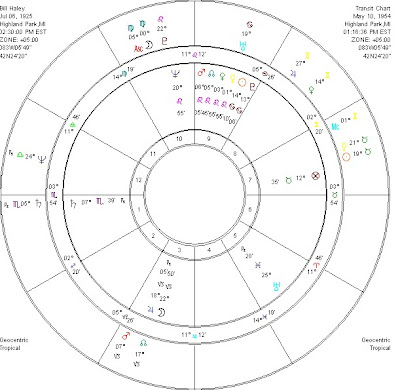 With Sun conjunct Pluto in sensitive Cancer he wouldn't immediately seem to be a potential musical stage and movie sensation - but note his four planets in show-bizzy Leo . Mercury, Venus, Mars and Neptune, together with North node of the Moon all in Leo and close to midheaven - the stage of the zodiac. Intense Scorpio was rising, with business-savvy Saturn very close to the ascendant angle - providing enough business sense to get Haley started on the course his Leo planets yearned for.

Moon and Jupiter in Capricorn (ruled by Saturn) oppose his Sun and Pluto in Cancer. That prominent opposition in Haley's natal chart provides a push-pull dynamic between what could almost be termed "sense and sensibility". How that played out in real life I'm not sure. He was married three times, and had "at least" eight children. He was a self-confessed alcoholic. According to Wikipedia, Haley has not always been portrayed in a positive light in various depictions and accounts of his life story. Possibly this astrological opposition brought trouble in balancing his show biz and personal life, in a profession well-known as being one of the most challenging of all in this respect.

In the transit chart for 10 May 1954 (outer ring), Saturn had returned almost to its natal position - Haley's Saturn Return. This was a clear indication of fundamental change coming up for him. Uranus, planet of change had fairly recently passed over his Sun/Pluto conjunction, echoing what his Saturn Return was heralding. Lifestyle changes were bound to follow on from imminent success.

The transiting nodal axis in 1954 was in line with that Cancer/Capricorn opposition in Haley's natal chart. I'm not certain what significance this might have had. A solar eclipse in June 1954 at 8 Cancer was fairly close to his Sun/Pluto~~Moon/Jupiter opposition, but not close enough to provide a "hit" - even so, it might be of some relevance.
Posted by Twilight at Sunday, May 10, 2009

Very entertaining article... Haley was an innovative artist who played guitar with a style and technique (high up on the fret board) that was totally new at the time. He has a very dynamic horoscope that shows true artistic genius and probably made him very difficult to get along with on a personal basis. His natal Mars conjunct the Node shows that he was born to help birth Rock-n-Roll!

Ah good old Bill, the bringer of all evil to us good Catholic convent girls according to the nuns of my acquaintance.
Interesting chart, I don't know anything about him personally, so now I'm off to Wiki him...
XO
WWW
OMG - my WV is, wait for it, "onlyew"

Off topic...another singer on Britains Got Talent has caused a stir over here.

Hope you can get this. His name is Greg Pritchard and has a 6 octave vocal range, more than Mariah Carey. That makes him a male soprano!!!

What came out of that boy's mouth was amazing and didn't match how he looked which is why it confused Simon Cowell...worth seeing just to hear his comments at the end. He just doesn't know what to make of Greg's voice.....lol

PS Good post on Bill Haley. I've never been stuck in one particular era to do with music. From Fats Waller to George Michael, Stevie Wonder to Johnny Cash. And thats just the boys. I love music with a tune that I can sing along too. Only thing I can't get into is Opera...oh well can't have everything.

Shawn ~~~ thanks! Yeah - hisMars/Node must represent that incessant BEAT which ran through n his blood!!! ;-)

WWW ~~~ He was the first to get the gals dancing in the aisles, as I recall it - even back in Olde England.
:-)

Rossa ~~~ I've just seen Greg Pritchard at YouTube - thanks for the heads up! Oh my! What a voice, and what a surprise!

Apart from his chosen musical genre (opera) he reminds me a lot of our Adam (Lambert). Getting them to sing together would be a trip and a half!

I'm of a similar mind to you musically - as long as there's melody involved, I'm in. I love a good lyric most of all though.
:-)

When there is a state of confusion at stake, I'm always willing to contribute!

Haley was a true groundbreaker. I was born in 1955, so the earliest days of rock 'n' roll are a bit of a haze, but I do remember the old joke of him rocking around the clock so much he fell off the mantlepiece.