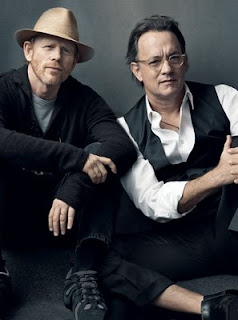 Tom Hanks and Ron Howard appeared together, chatting with Larry King on his TV show last week. Ron Howard has directed current release "Angels and Demons", as well as earlier movies with Tom Hanks in the leading role: "Splash", "Cocoon", "Apollo 13", & "The Da Vinci Code". I was tickled by a remark from Tom Hanks who, when asked by King why he thought that his actor/director collaboration with Ron Howard was so successful, responded with: "we fill each other's crannies". When someone with an interest in astrology hears such a remark, thoughts immediately fly to natal charts. Mine did.

Here are the two charts, with data from Astrodatabank. 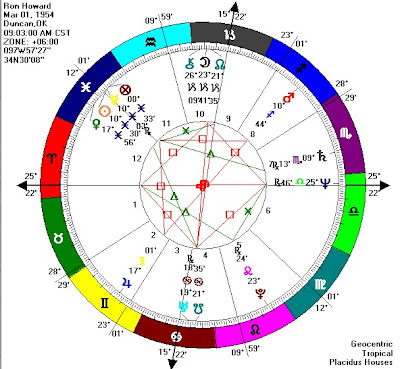 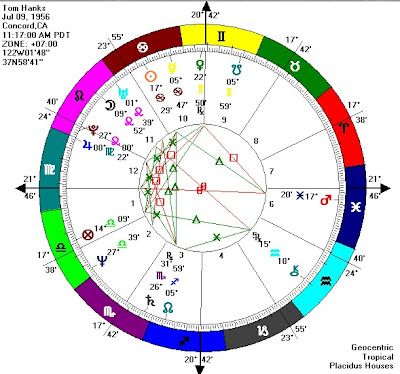 Straight off, even without the benefit of seeing charts, there's the link of Suns in Water signs, Pisces and Cancer; and a generational similarity - 2 years between them. That doesn't speak to "filling each other's crannies" though. That speaks to a general compatibility.

Tom has the extra Leo input from Moon and Uranus. He's quite at home on the stage and in the limelight, in fact he revels in it. Ron has a more serious Capricorn Moon, though he does have experience of being in the limelight himself, in his younger years (he played Opie in "The Andy Griffiths Show", and The Fonz's friend in "Happy Days"). Apparently, in maturity, Ron prefers to be behind, instead of in front of the camera. His Capricorn Moon is conjunct North Node of the Moon as well as being close to midheaven, the career sector of the natal chart. This adds importance to the Moon's placement and to serious, business-savvy Capricorn in his public persona.

Tom has Venus in Gemini close to his midheaven, something which manifests clearly when he appears on chat shows. He's gregarious, funny, very chatty, always entertaining. Ron Howard comes over as much more subdued. 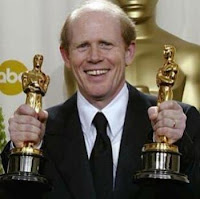 Ron's rising sign is Aries - the leader. To be a director in the cut-throat movie game one needs extreme confidence, energy and leadership skills - here they are.

Tom Hanks has directed movies too. His Leo planets are helpful for that aspect of his career, Leo is a leader also, as well as loving to ham it up in the limelight. 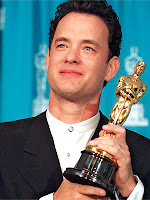 Tom's Virgo ascendant seems quiet, but not to forget that Virgo is ruled by Mercury the commuicator. Virgo is the more discerning and discriminating side of Mercury, while Tom's Gemini midheaven lets loose his wilder side. He has an ideal combination for an actor, I think: Leo, Virgo, Gemini prominent, in combination with sensitive Watery Cancer.

So can we see the crannies filling? You know, the crannies are not particularly wide - they certainly aren't canyons! Both men can do each other's jobs, and have done so. Tom the director, Ron the actor. I'd say the biggest small cranny there might be between them is filled by Tom Hanks' limelight-loving Leo bits.

Lovely post, T and good spot on the Larry show.
I admire both these gents tho hesitate to see Angels and Demons as I preferred this book to the Da Vinci and sometimes movies of valued reading material are a bit of a let down.
I see it topped at the box office though ;^)
XO
WWW

I agree with Wisewebwoman. Maybe you could also look at other relationships from the movies ie Scorsese and De Niro, Hitchock and Jimmy Stewart, etc,

Who knew? We knew!
Opie is one of Duncan's many claims to fame - Erle P., Jeanne Kirkpatrick, Hoyt Axton and Jackie Sherrill. Of course, Erle P. is the only one who stayed around!!!

Tom Hanks, with his Venus conjunct the midheaven, has had an amazing career. There is no other aspect I would rather see for worldly success and popularity. On those rare occasions when this aspect pops up for me on a lunar return, I find myself selling twice the advertising in half the time, and to the most beautiful people! He also has Mars conjunct an angle, and coincidentally his first big role was as a gender-bender of sorts on a popular tv show.
My brief foray into blogging was enough to show me that I do not have what it takes to be good at what you do.
i have not posted there in quite some time. It is more fun to follow other people's blogs, like yours!
Nevertheless, I would be honored to contribute somehow if you ever wanted to cover a sports topic.That would be fun! How about Kobe Bryant vs. LeBron James? These are the top 2 players in the NBA and they appear to be on a collision course to compete for the pro basketball championship...

WWW ~~~ Thanks! We might be seeing the movie later this week. From clips I've seen so far, it looks like one of those noisy, slam-bang-wollop kind of films. Not sure I'll enjoy, though the plot sounds interesting.

Laura ~~ ~ that's a good idea - thanks! I'll research a few duos and see what I can come up with.

TNPOTUS ~ Hi! LOL! I guess I knew he was from Oklahoma, but had forgotten he was actually from this town. We do have a few locally born luminaries don't we, for an insignificant small town in the middle of fly-over country.
The American Dream used to work then, once upon a time. :-)

Shawn ~~~ Oh yes, that would be great! I've never heard of either of the guys you mention because sport of all kinds is a closed book for me.
Your input as a guest post would be valuable, especially if these two are in the news currently.

Here's an e-mail address for initial contact, so we can decide how and when to post something. (I'll reply using my regular address):


Yes, I agree, Venus @ midheaven is what does it for Tom - especially as it's in Gemini, too.