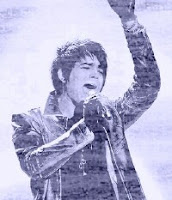 Excitement is building, at least it is here, Chez Twilight.

The semi-final of American Idol airs tonight. It has been pretty obvious for many weeks that Adam Lambert has "STAR" written all over him. It's hard to imagine either of the other two semi-finalists, good as they are, beating him. But then, this is Idol, and not the real world. I can never understand, by the way, why some people look on American Idol as "Reality TV". It's not - it's a talent show, and what it offers to winners, if they are good enough, is a lifestyle far removed from reality.

Another of the semi-finalists, Danny Gokey or Kris Allen will likely be relegated to third place after tonight's show - unless the unthinkable happens. To lose his front-runner status, Adam would have to really mess up, catch swine 'flu or fall through that dramatic staircase, as the show's stage manager, Debbie Williams did a couple of weeks ago. And yet -
the voting public has the last word. Danny has a big church-related fan base, Kris is adored by the tweeny gals who vote, and vote multiple times. Nothing is certain.

I'm a fierce Adam fan. I care not a jot that I'm old enough to be his grandmother, and I suspect that even I am not his oldest fan. He appeals to all age groups. There's a sweet video (embedded below) featuring what must surely be his youngest fan. Just this morning I logged on and found a new comment on an old post of mine about Adam, from someone who says they are "obsessed" with him. He seems to have this effect on people. As well as his outstanding vocal abilities he has such visual attraction when he performs. His musical theater background is paying dividends here. As well as having huge potential as a recording star, he'd be great in movies, music videos, or on Broadway. When was the last time somebody with this combination of talents came on the scene?

I've scoured Adam's natal chart for a hint of what might happen tonight. I'd say that the signs are good. Here it is, with today's transits on the outer ring (click on it to enlarge). 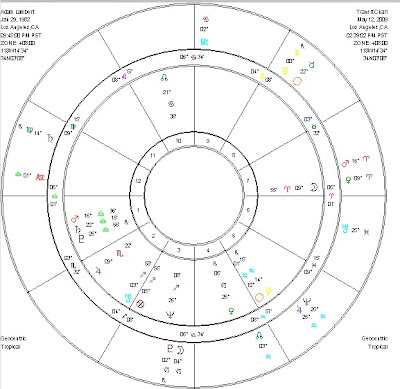 Transiting Venus (planet of music and the arts)is at present right over Adam's natal Moon in Aries. I might be a wee bit out with his estimated time of birth (he has said he has Libra rising) but transiting Venus would still be very close to his Moon, whatever the exact birth time.

It's looking good! The teeny-tiny Adam fan, below agrees. She's totally entranced by her idol.

Pre Dialup Dementia I caught him on Youtube a few times, I agree on his charismatic presence and voice.
Enchanting is the word that comes to mind, T.
I sure hope he wins, I sure hope it doesn't wreck him.
XO
WWW

Paisley has a terrific crush on Adam! If I were Adam's astrologer, I would be a little concerned about that opposition of transiting Mars to natal Mars, as it affects his chances of winning. Transiting Moon forming a T Square to this configuration means it could be touch and go.
Thanks Twilight

Yes, it's a talent show, which is good, but too many of them ridicule at the audition stage, with people with no talent whatsoever, which IS reality TV. I think this is where the accusation is deserved.

WWW ~~~ That's always a danger. I think - hope -his "apprenticeship" in musical theater will have strengthened him somewhat. It seems almost a given nowadays though that young stars fall into the drugs and booze trap.
It's an enormous test.

Mars might also be energising him
rather than causing a problem. Moon will soon move along.....fingers crossed!

Last night's show wasn't one of my favourites. Song choices weren't good - fairly obscure stuff.
Adam sang well, as always, but to be breathtaking he needs the right song.

That's what'll make or break whoever wins - after Idol - the first album. If at least one or two songs aren't memorable and melodic - it'sll be a hard slog from then on. There seems to be a lack of good songwriters these days.

Adam could do other things though - movies, stage, acting.

AN ~~~ Oh yes - they do concentrate far too much on the auditions in my opinion. One show with clips of the most entertaining or best performances, with one or two sillies would be sufficient. Then spending much longer on letting us hear and see the final 20 or so would be a better plan.