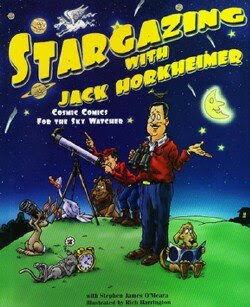 From my recently acquired "Stargazing With Jack Horkheimer - Cosmic Comics for the Sky Watcher" comes this information which put things astronomical into perspective, using familiar items as yardsticks. I don't know how others feel, but once astronomy buffs (or economy buffs) start using B-I-G numbers, my mind closes down. Mr. Horkheimer's explanations hit the spot for me, they are primarily aimed at young people, but do the job they're intended to do irrespective of a reader's age.

Mr. Horkheimer tells us that:

We could line up 11 Earths side by side across Jupiter's middle, and could fit 1,300 Earths inside Jupiter, were it a hollow sphere.

Our galaxy would consist of 200 billion oranges, grapefruits, melons and football-field- size pumpkins occupying a space 20 million miles in diameter. 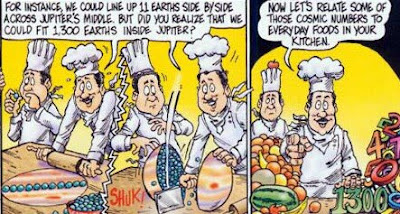 But there are at least 100 billion MORE galaxies in the universe.

If we could fit our entire solar system inside a coffee cup, our galaxy would be the size of North America.

I feel a chronic mind boggle coming on!

Now that relative sizes are clearer, I looked for something depicting just one galaxy out of the 100 billion...ours. See the Sun? The, to us, enormously important Sun upon which we rely for every single thing in our lives - it's a tiny little speck on just one section, the Orion Arm, of the galaxy, a galaxy which is just one out of at least 100billion. 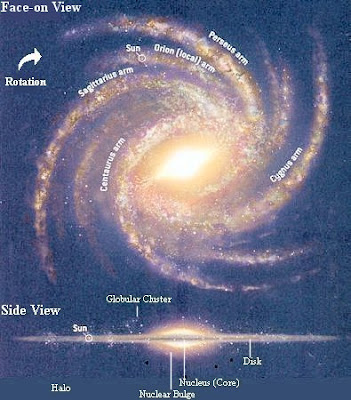 I love simple explanations, too T, the large numbers I don't think anyone can grasp no matter how clever. Our brains aren't built to understand such incredible concepts.
I liked your side view. Totally digestible!
XO
WWW

WWW ~~~ thanks - yes, it this is a helpful simplification. I still wind up gobsmacked by the end of it though. :-O

Thanks for the post - I never really thought about it this way before. It most certainly makes a lot of sense.

Laura - Hi! Yes, it's good that someone understands it all clearly enough to present it in those terms. I'm still fairly mind-boggled!

The math of the universe, how it works from the big to the small, always fascinates me. When I first began looking at the theories around it, and their mind boggling strangeness, someone suggested to me I begin by reading Alice in Wonderland.
After doing so, I began to understand.

AN ~~~ Really? Interesting! I might have to give that a go myself. It's a long time since I read that book :-)