The Magic in "Les Miz" 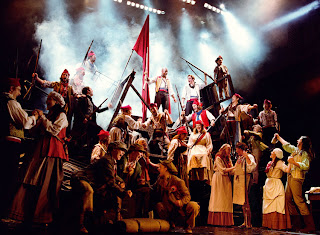 Les Miserables, the musical version of Victor Hugo's famous novel of the same name, turned out to be one of the 20th century's most popular shows. It has been in the news again during the past few weeks. Two contestants on TV's Britain's Got Talent have sung songs from the show and wowed audiences, not only in the theater and on TV in Britain, but worldwide via video clips.

Susan Boyle, about whom we heard an awful lot a week or so ago, sang "I Dreamed A Dream", from Les Miserables.

Jamie Pugh, a Welsh contestant got a standing ovation for his rendition of "Bring Him Home", also from Les Miz.

I suspect that there's more at work here than the obvious. Yes, the two singers are exceptionally good, and both have appealing backstories, but had they sung something else, would the reaction of listeners and viewers have been as intense? I doubt it. The heart of the magic lay in the songs they chose to sing. 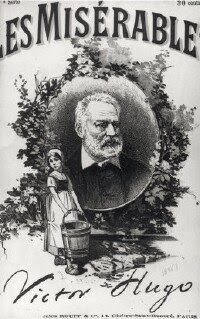 Victor Hugo's story of revolution and redemption in 19th century France is the core of the musical's success. His natal chart can be seen at Astrodatabank here. He was born 26 February 1802. Sun, Mercury, Venus and Pluto all in Pisces, the Mutable Water sign, sign of the mystical, sensitive, compassionate dreamer.

The music for Les Miserables was written by Claude-Michel Schonberg (below, left) born 6 July 1944 in Vannes, France. He has Sun, Mercury, Venus & Saturn in sensitive, sentimental Cancer - Cardinal Water.

Author of the touching lyrics which bring Shonberg's beautiful music to life was Alain Boublil (below, right), born in Tunis, Tunisia, 5 March 1941. Sun, Mercury and Venus all in Pisces (similar to Victor Hugo's chart). 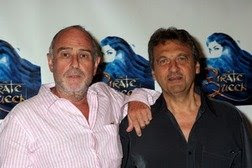 What a lot of input from the element of Water, both Mutable and Cardinal, in those three charts! It's not at all surprising that the combination of story, music and lyrics, born of such an emotionally sensitive Watery genealogy, would have the power and the magic to open the flood-gates and touch millions of hearts. It happened!

I never got round to reading that novel, although I did read his 'The Hunchback of Notre Dame', which I enjoyed thoroughly.
Maybe one day.

I've seen the show a few times now, 2 or 3 can't remember exact count but it is memorable and wonderful and emotional. thanks for the details on the men behind it!
XO
WWW

AN ~~~ Me neither - I have a feeling it might be hard going to our 21st century eyes. If I come across a used copy though, I shall buy it and give it a try. :-)

WWW ~~~ I've seen film versions of the book - a couple of different ones. Still waiting for an opportunity to see the musical version - it has never come within travelling distance for me.
I know most of the music though, and love it. :-)

I've seen the musical twice and the music is something I have listened to deeply at key times in my life. deeply moving and very personal for me. wow, thanks for looking at the astrology; it would not have occurred to me to do so and it's facinating!

that vid of Jamie Pugh is moving as well. love it.

Lara~~~ Hi!
Glad you enjoyed the post. I'm going to treat myself to a DVD of the music, while I continue to wait patiently for an opportunity to see the show on stage. :-)