Last night's final performances were interesting, though not the best I've seen from either Kris Allen or Adam Lambert. These two must be worn out both physically and mentally. Adam has the better training and experience to withstand this kind of strain, and is doing so admirably, but Kris, tired as he must be, also stood up to it well. The show seemed rushed, which detracted from the enjoyment; an extra 15 or 20 minutes could have made all the difference.

Adam's first song, a reprise from the season, "Mad World" showed off his flair for drama. Clad in a long black coat, surrounded by mist, he slowly descended the Idol, staircase, singing. The vision, for some reason, reminded me a lot of "V for Vendetta" (though Adam didn't have that hat!) Simon Cowell said it reminded him of "Phantom of the Opera", the other judges thought "Twilight" (not me - the movie!!). Adam's natal Pluto in first house, is being highlighted at present by a trine from the transiting Jupiter/Neptune/Chiron cluster in Aquarius. It came out visibly in that dramatic, rather eerie presentation. Very, very Pluto!

His second song, chosen by the show's creator, Simon Fuller, was "A Change is Gonna Come". It was a knock-out emotional performance. He sang the last line as "My change is gonna come" - I'm not sure if that is in the original lyric, but for last night it fitted so well. The song fit Adam's Aquarian Sun and Mercury too: Aquarius = change. I wonder if Simon Fuller knows astrology?

Adam's third song was a godawful composition co-written by one of the judges (Kara), to be sung by both contestants. No melody, silly words - the title is the only thing going for it: "No Boundaries". Adam did the best he could to breathe life into the dirge, and pleased Kara, at least. 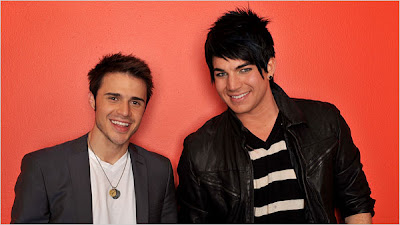 Kris's reprise song was "Ain't No Sunshine". He sang it probably as well as it has ever been sung. His trio of planets in Cancer brought sincerity, heart and sensitivity to the pretty lyrics.

Simon Fuller's pick for Kris: "What's going On" wasn't ever going to have quite the impact of "A Change is Gonna Come", even though it, also, is a socially conscious song. Personally I'd have liked a little more drama here from Kris - this type of song needs hammering home, and Kris isn't a hammerer.

This morning I read through a few articles and strings of comments about last night's show; putting everything together with our own impressions, it looks as though it'll be a very, very close result. Certainly there'll be no runaway winner.

Experimentally, I pulled out my tarot cards to see if they had an answer as to who will be the winner tonight. I think the cards were teasing me! I drew:
King of Cups/Queen of Coins/Knight of Cups. Two Cups cards (Water) relate more to Kris's Cancer Sun than to Adam's Airy Sun and ascendant. Air is represented by Swords in tarot terms, and there are no Swords there. Coins relate to Fire, and both guys' Moons are in Fire signs. The Moon tonight is in Aries, Adam's Moon is in Aries - is that a good sign? It's not a bad one.

Taking the series as a whole, in my own opinion it's very clear that, if there's any justice, Adam Lambert should win. Even on the evidence of last night's performances alone, Adam should win. But having read what others think, matters become very confused.

It seems that in reality, outside of my own little world, it is TOO CLOSE TO CALL.

Kris Allen is American Idol 2009.
I should learn to trust my tarot cards!! Yet what about QUEEN!!! Queen of Coins - will Adam finish up fronting Queen when he's free from any ties of Idol's contract?

I loved the Santana segment and the Queen segment - I think they could hear our TV in Oklahoma City, 80 miles away, during those two numbers!

Congratulations to Kris, and congratulations to Adam, who I suspect will be the bigger star in the end - just watch! Both will be fine.
And we have tickets for the American Idol concert in Tulsa in July!! Can't wait to see 'em all, in the flesh!
Posted by Twilight at Wednesday, May 20, 2009

Yes, this one is too close to call! I would say that Kris is the one who grew the most as an artist over the course of this show. Adam has a closer to finished polish about him that makes him the safer bet in the near future.

Shawn~~~ Agreed. He's assured of a brilliant future now, even though he was not the winner tonight. Phew!!! What a ride!

And we're just getting into the final week of Britain's Got Talent over here. Not my favourite talent show, though.

AN ~~~ That should be interesting, I wonder if Susan Boyle will hang on to that early razzamatazz the media led about her a few weeks ago. :-)