The astrological elements, Earth, Air, Fire and Water will feature in a movie due for release next Friday : "Angels & Demons", an adaptation of another of Dan (Da Vinci Code) Brown's novels. It's not often that anything even loosely related to astrology gets a mention in movies. That is strange. People don't have to "believe" in astrology for it to be part of a plotline. Presumably people don't believe in vampires, zombies, talking mammoths and penguins, etc. etc. but they still feature in movies. 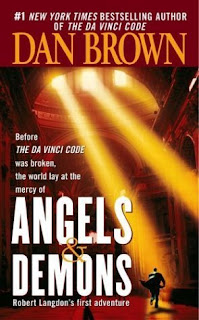 From Wikipedia - on "Angels & Demons":

"The Path leads Langdon to four major locations in Rome (Vatican City is within the city of Rome), each associated with what the Illuminati believed to be the four primordial elements of all things in existence: Earth, Air, Fire, and Water. Upon arriving at each location, Langdon finds one of the Preferiti murdered in a fashion appropriate to the location's respective element".

Perhaps the reason astrology gets ignored is that authors and screen writers don't understand it sufficiently to write about it in an entertaining way.

We're looking forward to seeing "Angels & Demons", but wondering whether our local cinema will carry the movie in its schedule. The Powers That Be in this town (the churches) don't like demons. Our local High School sports teams are called "The..... Demons" and TPTB have been trying to get that name changed for years! Dear me!! If we have to travel to a nearby city to see the movie - so be it.

Speaking of astrological elements, Earth, Air and Fire (could be said to be Earth, Wind and Fire, but that name's already taken) will feature in American Idol's semi-final on Tuesday evening - Danny Gokey (Earth - Taurus Sun); Adam Lambert (Air - Aquarius Sun) and Kris Allen (Fire - Sagittarius Sun). Even if American Idol isn't normally your thing, Tuesday's show should be worth an hour's viewing. The three finalists are all very, very good, in very different ways - as are their astro-elements. It's "All the Young Dudes" (David Bowie) who've struggled through to the semi-final. Allison Iraheta was voted out this week, a great pity, in my opinion.

Thinking more on the three guys' Sun elements - is one stronger than another? Air can't destroy Earth, and Fire feeds on Air, but Air can sometimes blow out Fire. Earth can't destroy Air, but it can smother Fire. Following that logic(?) the final should come down to Adam and Danny (Air and Earth)- one from a theatrical background, the other a church music director. They kind of represent two sides of America.
Posted by Twilight at Saturday, May 09, 2009

I read the first 70 pages of The Da Vinci Code and got bored with it. I'm not saying it was bad, but I've researched the subject so much that the plot was immediately obvious to me. A shame really.

AN ~~~ I knew the background too, and wasn't overly impressed with the book or the movie of "Code".