On 10 November 1975 an ore carrier, the Edmund Fitzgerald sank in Lake Superior during a November storm, taking the lives of all 29 crew members. Later that month, Canadian singer-songwriter Gordon Lightfoot, inspired by an article in Newsweek Magazine, wrote Wreck Of The Edmund Fitzgerald. Gordon Lightfoot, born 17 November 1938 in Orillia, Ontario, Canada with Sun in Scorpio, along with Venus, and Scorpio rising must have felt immediately drawn to the tragic story of death in water. Scorpio is the Fixed Water sign of the zodiac, and with its ruler, Pluto, links to death and darkness.

Even in If You Could Read My Mind (this one I like) he writes of ghosts and chains and darkness - more Scorpionic symbolism!


As far as I know Gordon Lightfoot is still around, and in his mid-70s. 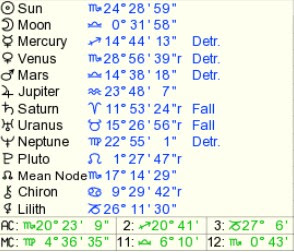 Another side of Scorpio Sun, from a different generation, can be seen in Fanny Brice. Fanny was born in New York on 29 October 1891 at 12.03am (astro.com)

Her name is familiar, these days, mainly because of two movies, Funny Girl and Funny Lady starring Barbra Streisand, and based (albeit loosely and with liberties taken) on Fanny Brice's life story. 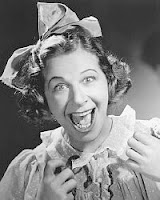 Fanny's forté was her talent to entertain, and the ability to integrate humor into music.
The daughter of immigrant Jewish saloon owners in New York, Fanny was drawn to a life on stage early on. She appeared in burlesque revues and the Ziegfield Follies, honing her craft, developing her humor. Later, from 1930 onward her radio portrayal of the character Baby Snooks, "a bratty toddler" brought her national fame.
An archived post of mine looks at Fanny Brice and her natal chart in more detail 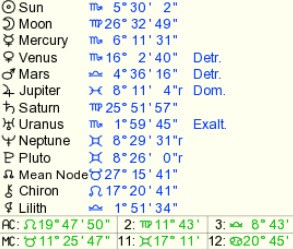 I've borrowed natal planetary position lists for these two artists from astro.com.
Fanny Brice had benefit of sunny Leo rising and erratic Uranus close to her natal Sun.
Lightfoot's Scorpio rising with Sun just 4 degrees away in his First House of self is possibly why Scorpio's traditional darkness filters through more clearly in his work.

Generational differences figure in too, I think. Fanny Brice's generation had the Neptune/Pluto conjunction in Airy Gemini, as mentioned in my earlier post linked above: "Pluto and Neptune, two generational planets were exactly conjoined in Gemini when Fanny was born. People in her age group had a creative powerhouse to draw upon, especially if their personal planets linked to these two outer planets; in Fanny's case Mars, planet of energetic drive, was in helpful trine from Libra."

Lightfoot's generation (myself included), with Uranus in Taurus, Neptune in Virgo and Pluto in Leo were born into a more Earthy astro atmosphere, though with Pluto just inching into Leo.
Neptune sextiled Lightfoot's Sun and Venus, while Pluto sextiled his Libra Moon
Posted by Twilight at Wednesday, November 18, 2015

I'm of the Uranus in Cancer, Neptune in Libra, and Pluto in Leo generation. My Uranus does not square Neptune (relief!), but Neptune is sextile Pluto (more relief!), which feeds into my string of semisextiles from Leo to Scorpio.

Definition of sextile from Urban Dictionary:

"1 (adj.) Any item of clothing that is figure flattering and entices the opposite sex is a sextile.

2 (n) An individual who is versatile in the practice of sex. The best practitioners are usually sensual, creative, and experienced.

1. She put on her best sextile for her date with Michael. She knew he would find it difficult to maintain his composure when she wore her lucky dress.

2. He is the best sextile ever! I can never pass up an invite to sleep with him."

1. Making love on a carousel ...
2. Getting amorous while renovating a bathroom ...

Anon/kidd ~ I haven't seen one of those in a very long time, came across 'em a lot back in the day. ;-) Kissing gates too.