Charles Henry Buckius Demuth (November 8, 1883 – October 23, 1935) was an American watercolorist who turned to oils late in his career, developing a style of painting known as Precisionism. I'd never come across his name before, he mustn't have been one of The A-List, but he did fraternise, a lot, with several people on that list. Georgia O'Keeffe, for instance, was a close friend of his, "O'Keeffe & Deem" they called each other, though it was likely not a romantic relationship, as Demuth was homosexual. He willed all his oil paintings to O'Keeffe though so it must have been much more than a casual friendship.
(See here.) 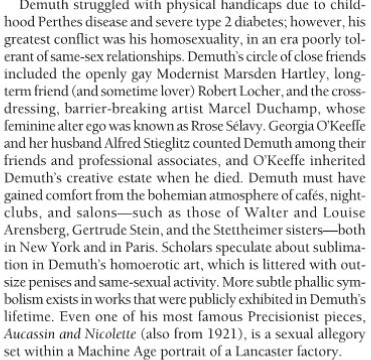 Ken Johnson wrote in the New York Times in 2008:
I like to think he [Demuth] was having a bit of fun with the expectations of his day, that he said to himself: “They want manly paintings. I’ll give them manly paintings!” What he couldn’t help doing was to make them beautiful.

This 6 minute video illustrates nicely the sharp differences in Demuth's art styles: lovely dreamy water colour flower studies, sploshy figures, often homoerotic, then a complete turn around to his precisionist works. One could be forgiven for suspecting these were works of two different artists.

In a post a few weeks ago the word ekphrasis came up, in connection with a poem by William Carlos Williams about a painting. Demuth turned ekphrasis on its head and did a painting about a poem - a poem by that same poet, as it happens.

Among the rain
and lights
I saw the figure 5
in gold
on a red
firetruck
moving
tense
unheeded
to gong clangs
siren howls
and wheels rumbling
through the dark city.

Williams’ poem recalls a night when he was walking down Ninth Avenue in New York City on his way to painter Marsden Hartley’s studio. He heard the noises of a fire truck, only to turn around just as it was passing by. All he saw was the number of the truck, a five painted in gold, on a red background speeding past. At this moment in his career Williams was trying to create poems that were precise and concrete representations of original experiences, so he avoided symbolism and metaphor in favor of simple language that evokes the speed (“moving tense unheeded”), the sounds (“gong clangs siren howls and wheels rumbling”), and the images (rain, lights, firetruck, dark city) he witnessed. Reportedly, Williams wrote this one-sentence poem right there on the street that night.

Williams’ poetry is deliberately straightforward, but Demuth’s painting is complicated. You really must know the poem to decode the painting. The setting is a tunnel-like street, which is flanked by sidewalks and buildings. Much of this backdrop is gray and black, but for the illuminated shop windows and globular streetlamps on both sides. The fire engine dominates the middle of the composition and although its form is abstracted we can recognize it by its red color. We can see the truck’s ladder on the right, and a long bar stretches across the bottom of the truck, which resembles an axle with two wheels or roaring sirens. The little curved lines that radiate from those sirens or wheels can indicate sound, motion, or both.
(More at the link)

A lifelong friendship between the poet (who was also a doctor) and the painter began in their student days. 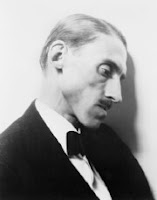 While attending art school in Philadelphia he met a medical student named William Carlos Williams, and they became lifelong friends. Demuth was diabetic, and in a 1924 photograph by Stieglitz he appears emaciated. This was most likely the result of diabetes treatment in the days before insulin — a rigid diet with severe restriction of food intake. Demuth was one of Steiglitz’s circle of artists who included Charles Sheeler, Arthur Dove, Marsden Hartley, and Georgia O’Keefe. (See here.)

The natal chart is set for 12 noon as a time of birth isn't known. Moon position will not be exact and ascendant remains unknown.

Born in Lancaster, Pennsylvania on 8 November 1883. 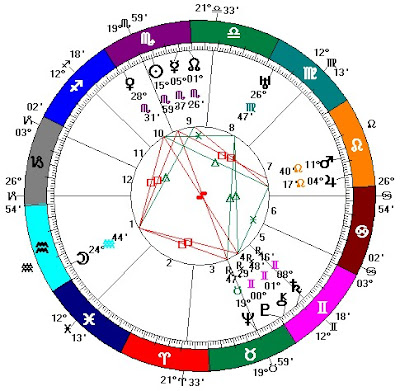 First thing to catch my eye is the conjunction of a doleful trio, Pluto/Chiron/Saturn in Gemini. I'd guess that this represents Demuth's ongoing severe health issues which led to a relatively early death, just short of his 52nd birthday.

Without a time of birth Moon's exact position isn't known, so any square aspects shown in the chart may or may not be valid. Moon could have been around mid-sign Aquarius or very late sign (maybe even on the Pisces cusp) - or somewhere between. Aquarius Moon echoes the Venus/Uranus sextile link, as Aquarius in modern astrology is ruled by Uranus. His Aquarius Moon would easily go along, encourage even, any inventive, futuristic or even shocking ideas Demuth displayed in his work.

Difficult square aspects from Mars and Jupiter in Leo to his Scorpio Sun and Mercury could underline health challenges already reflected in that Pluto/Chiron/Saturn cluster.
Posted by Twilight at Friday, November 06, 2015

You mention that his artistic styles camouflage the singular artist that produced them. His oeuvre can be divided into distinctive groupings sharing similarity and homogeneity. A facet of his Gemini planets? I like all of his work, but I don't quite connect with them...something is lacking, maybe an emotional appeal. Demuth's overt, homoerotic art is polar to O'Keeffe: her's is fluid, metaphoric female sexuality, vibrantly colored, passionate and sensual. His less overt, metaphoric male sexuality, industrial art is linear-cubist, rather drab-colored, surficial, and cool to the emotions. Demuth and O'Keeffe had yin-yang artistic styles. I can understand their mutual fondness by looking at their synastry:
http://www.astrotheme.com/astrology/Georgia_O'Keeffe
Ken Johnson called his still-lifes sensuous and lively...I agree with lively, but sensuous only referring to tactile, not sexual.

I'm just guessing for the fun of it...perhaps his early Gemini planets fell in his 6th house (health), putting Mars-Jupiter in the 8th (sex), with Uranus somewhere near the MC (known for shocking the public and the avant garde), some of the Scorpio planets in the 12th (confinement, health restrictions)...giving him a Sagittarius ASC (ruler Jupiter in the 8th, associating his 1st house identity with expanding ideology of sex). This array could allow a Neptune placement in the 5th of creativity.

mike ~ I agree that it's the Gemini coming out in his nature, enabling his varsatility in art style. (I almost wrote as much in the post, in fact.)

Your speculation as to positioning of the planets fits very well. I'd thought about 6th house for the Gemini trio myself, but didn't go on to assess where the rest would fall - and as you've calculated, it does all fit very well indeed.