Gunpowder Plot and All That 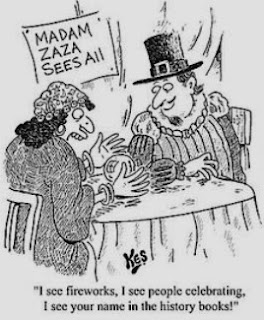 A couple of British 20th century humourists, W.C. Sellar and R.J. Yeatman once wrote a series under the title 1066 and All That, for the famous Punch magazine. The series, later developed into a play and, in 1930, a book. It's a tongue-in-cheek parody of English history. I have a copy of the book on my shelf and immediately reached for it when considering today's date, 5th November and all that...:


Remember remember the fifth of November
Gunpowder, treason and plot.
I see no reason why gunpowder season
Should ever be forgot

Wikipedia's other page on this topic for those who prefer a more sober assessment of events.

1066 and All That's content truly is an acquired taste. To the uninitiated, unused to this type of humour, it'd sound just silly. You really had to be there (in England over many years of a certain era) to really "get it". Anyway, I decided to re-read what the authors had to say about events of 5 November 1605:

James I: A Tidy King
JAMES I slobbered at the mouth and had favourites; he was thus a Bad King. He had, however, a very logical and tidy mind, and one of the first things he did was to have Sir Walter Raleigh executed for being left over from the previous reign. He also tried to straighten out the memorable confusion about the Picts, who, as will be remembered, were originally Irish living in Scotland, and the Scots, originally Picts living in Ireland. James tried to make things tidier by putting the Scots in Ulsters and planting them in Ireland, but the plan failed because the Picts had been lost sight of during the Dark Ages and were now nowhere to be found.

Gunpowder Plot
There were a great many plots and Parliaments in James I's reign, and one of the Parliaments was called the Addled Parliament because the plots hatched in it were all such rotten ones. One plot, however, was by far the best plot in History, and the day and month of it (though not, of course, the year) are well known to be utterly and even maddeningly MEMORABLE.
The Gunpowder Plot arose in the following way: the King had recently invented a new table called Avoirduroi, which said:
1 New Presbyter = 1 old priest.
0 Bishop = 0 King.
James was always repeating, `No Bishop, No King', to himself, and one day a certain loyal citizen called Sir Guyfawkes, a very active and conscientious man, overheard him, and thought it was the slogan of James's new policy. So he decided to carry it out at once and made a very loyal plan to blow up the King and the bishops and everybody else in Parliament assembled, with gunpowder.(*) Although the plan failed, attempts are made every year on St Guyfawkes' Day to remind the Parliament that it would have been a Good Thing.

[Words in the illustration, which is included in the book and seems to be of around 17th century origin: top left- November 5 Old Stile. Top right in the shaft of light (Oh look a real Yod!) - Digitus Dei est hic = The finger of God is here. In box above roof - I suspect it says Opus tenebrarum = Deed of darkness. On the roof: Black Deeds. On the figure's cape it looks like AVX why (but isn't clear enough). Under the illustration: ...Thus sayth the Lord behold ... will rays evil against Thee out of Thine owne house. Signature and/or date (?) SAMV]

Pilgrims' Progress
It was at this time that some very pious Englishmen, known as the Early Fathers, who were being persecuted for not learning Avoirduroi, sailed away to America in a ship called the Mayfly; this is generally referred to as the Pilgrims' Progress and was one of the chief causes of America.

My thanks to THIS website for saving me the effort of copy typing.


I decided against any astrological 5 November ventures due to the Old Style/New Style brain fogging effect, both in relation to the event and Guy Fawkes' birth date (assumed to be April 13, 1570 Julian calendar) in York, England. If the 5 November date for The Gunpowder Plot was truly "Old Stile" as the illustration declares, then by our calendar it would be 15 November. England didn't move to New Style dating until much later, mid-1700s though, but Roman Catholicism had been using it since late 1500s, and these events were Catholic-related. Date-wise it's a muddle I prefer to leave alone.
Posted by Twilight at Thursday, November 05, 2015

Maybe in a parallel universe Parliament was blown to smithereens. I'm not sure what has kept the USA's congress from the same fate...at least attempted fate similar to Guy Fawkes. Many of the Catholics here are of the militant variety, particularly when it comes to family values and anti-abortion...they've been known to murder for the cause...I'm sure they could enlist assistance from their comrades, the Christians. Kim Davis and Mike Huckabee are available. The stickler is that congress is essentially both of those two religious groups, with few exceptions. It should be noted that congress has never hesitated to use the proverbial keg of gunpowder on US citizens, specially when prompted by lobbyists and big-donors. It seems we have Guy Fawkes in reverse here in the USA. Is congress holding a BBQ tonight with a giant bonfire?

mike ~ If I read comments on yesterday's post aright it's your B'day today! Happy Day, Happy Year, Happy Solar Return, Happy Life! Consider all the bonfires in Britain and all the firework displays there to be in your honour! :-D

It is surprising there's never been anything even vaguely comparable to The Gunpowder Plot here. Still, you've not had The King Thing here, at least not since 1776. The "King du Jour" here, i.e. the Prez, and his cohorts in congress reign for only 4 or 8 or 6 years, so there's always hope he and/or they will be gone soon, if proving troublesome - maybe that hope has kept Gunpowder Plots at bay. ;-)

Thanks for the well-wishes! Yes, today is THE day. I spent most of the morning enrolling in Medicare, Part D, 2015 and 2016. Had lots of problems, one because I don't have any prescription drugs and one of the Medicare website pages requires the list for comparison-pricing purposes...a great feature, but not for the prescription-less individual. I skipped that page, but then couldn't view the pharmacies in the network for each provider. That was for 2016 coverage, which I enrolled first. I had to call Medicare and they put a fake prescription on the page to force the result...LOL...I was too afraid that somehow that wasn't erasable or end-up written in stone. Then it dawned on me that I still had to enroll in the remaining two months of 2015, which I did, but accidentally clicked on the wrong provider, and that wrong choice had a hefty monthly premium. Had to call Medicare and they corrected their end, but I still had to contact the accidental provider to cancel...they hadn't received the work-order from Medicare, etc, etc, etc. Hours spent doing Part D! And I still have to call the accidental provider early next week to cancel the work-order, assuming it has arrived. The Medicare employees were very nice and helpful.

If I see a bonfire tonight, I'll claim it for mine! I live urban, so slim chance of bonfires, lest there be major trouble.

What activities occur on Guy Fawkes Day (aka Bonfire Night)? Only the bonfire? Roasting wieners and consuming a couple of pints? Any rousing anti-government songs?

Happiest of Birthdays Mike and thanks for being YOU...

You've brought light to my life in many ways and I appreciate it.

How nice to have a double conjunction on your solar return.
... And between such nice planets!
... And in such a fun natal house.

Have lots of fun.

mike (again) ~ Shucks! What a carry on to get Medicare cranked up! And on your birthday too! Hope you get it sorted soon.

Activities on Bonfire Night? Hmmm...digging around in memory banks, not sure if still the same: lovely gooey spicy ginger cake called ginger parkin was prepared by one's Mum or Gran, to be consumed around the bonfire. The "Guy", something like a scarecrow in old clothes, sneaked from Dad or Grandad, atop the fire. Lots of fireworks. If no bonfire were available, we'd often set off our foreworks in the backyard, and run around waving "sparklers".

I don't remember any anti-government songs being sung though - or any songs at all.
In the days (sometimes weeks) before 5 November kids/youths would make their Guy then sit around the streets with the effigy asking "Penny for the Guy?" I suspect this might have been outlawed. Pennies gathered were supposed to be used to buy fireworks.

Sonny - Thanks! You have a pretty good solar return, too:
http://planetwatcher.com/#1451066400
You can go to astrotheme.com and get the exact solar return for you with some interpretation:
http://www.astrotheme.com/solar_revolution.php


Kidd - Thanks! Yes, I like this SR, too. Are you ever going to reveal Mugsy's day?


Twilight - Sounds like a wholesome, fall season holiday. The ginger parkin, though I'd never heard of it until now, is my kind of cake: heavy, dense, candied ginger. Here's a recipe that uses a quince & pomegranate compote. Rarely see quince anymore, unless it's in someone's yard. I'm sure a dollop of whipped cream could replace the compote. You've said that anyjazz likes to bake...
http://www.lavenderandlovage.com/2012/11/a-bonfire-treat-sticky-yorkshire-ginger-parkin-with-quince-and-pomegranate-compote.html

Twilight, that's the way I remember 'bonfire night' too. Building a bonfire on a patch of waste ground, 'penny for the Guy' while trundling an effigy around on a home made 'soap box' (as in soap box derby races) and said effigy ending up on top of the bonfire. Ahh, it was great to be young before electronic and 'organised' entertainment...........

The most well known Bonfire Night is at Lewes in Sussex
https://en.wikipedia.org/wiki/Lewes_Bonfire

This year's bonfire effigy had a topical variation on the theme :)
https://www.rt.com/uk/320849-cameron-pig-bonfire-night/

JD ~ Those were the days! I recall the effigy makers had a lot going on during Thatcher's reign too! There never was, nor likely never will be a PM more deserving of it! ;-/