This week, just for a change I decided to begin with a Memorial Video to this artist from YouTube. Photographs by Tom Wolff, Paul Feinberg, Steven Kijek (her husband), and family archives. Sound: Philip Glass: I'm Going to Make the Cake. Assembled by Yar Koporulin and Steven Kijek. The video tells us much there is to know about the late Manon (pronounced Mu-NAHAN) Cleary.


Some of Ms Cleary's paintings can easily be mistaken for photographs!

Unless you were a working, writing, painting, drawing, kibitzing, loving, hanging-out member of the Washington [DC] art and gallery scene going back to the 1970s up to now, the name Manon Cleary might not immediately ring your memory bell.

To many interested people, she was something of a rumor, a wispy legend, but to those familiar with the scene and to her friends, students, intimates, her peers, she was a major somebody, a painter who was seen by at least one critic as one of the major and perhaps best figurative painters this city had to offer, perhaps one of the best in the country.

She painted and painted and painted, and her best, most visceral, most literal and haunting was herself and her body—and rats, bye the bye. If ever there was a person, man or woman, who lived the life of the artist in the very best sense of the idea, as well as its most outrageous, dramatic, shining, purposeful, generous sense, it was Cleary, who died at the age of 69 last Saturday, succumbing to her long-time companion, chronic obstructive pulmonary disease.

It’s easy enough to spy the drama, the aura surrounding her: she was one of those slender, great, long-haired beauties that once met, seem to remain unforgettable, and causing regrets in distant admirers who never got to know her. In her last years, she was forced to move about in public with breathing tubes and oxygen tubes, which turned her into a different presence, a presence which she brought off with remarkable aplomb.

For the past 40 years, she lived in the Beverly Courts Apartments on 18th Street in Adams Morgan, famous in earlier years as a run-down bohemian art magnet, especially because she lived there in a fourth-floor apartment. The façade, the musical, jarring, often painful surface of her life obscured her willingness, indeed, her great passion to help younger artists, protect them; promote them for all of her life. She taught for years at UDC.

If you read the stories about her, from which we’ve drawn this obituary, they seem to sing a lot of songs—a kind of alluring, fragile vitality, a siren song, of a woman with an operatic first name and an Irish-sounding last name. The rats, the friends, the strong and continued output of work made her a Washington original, a kind of scarred patron saint of struggling artists.

Her natal chart, set for 12 noon as no time of birth is known. Moon and ascendant positions would not be as shown, though Moon would have been in Aquarius, somewhere. 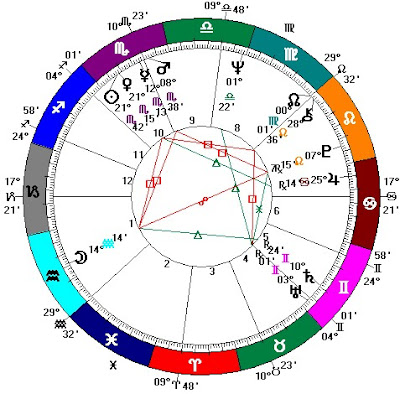 Ms Cleary had the generational trine from Uranus to Neptune in Gemini and Libra respectively, one or both could be in trine to her natal Moon, but of that we cannot be certain without a time of birth. Uranus, in any case is conjunct Saturn and again likely trining her Moon...hmmm...traditional and modern rulers of Aquarius in trine to Aquarius Moon? That'd be significant, and it fits that classic "life of the artist" remark in the quote above. A tad eccentric, delighting in presenting the unexpected in her artwork, certainly not work-shy in spite of physical difficulties.

Natal Aquarius Moon was likely opposed by generational Pluto in Leo, and square Scorpio Mercury/Mars - how closely isn't clear, but could have formed a T-square, the two squares completing it, and throwing a few difficulties in the artist's path - again, mainly relating to health issues, I'd guess.

A fascinating woman with some amazing artistic talent! Her production is complex and varied with an extensive range of subject choices, some more comfortable to view than others. None is verboten to me, I like all of her work, and I'm consumed by the vibrancy of many. There's an almost subliminal conveyance of feeling occurring, which can be difficult to achieve in realism. Maybe it's her Scorpio planets talking to mine...LOL. She has Sun and Pluto as final dispositors and in mutual reception, as do I.

Not too much available about her personal life, but I found this biographical essay regarding her adult years to be a fun read. Her adult life reads more like a novel or at least the author of this piece paints it that way. She was pleasantly, subtly colorful and had associates of equal tenor.

mike ~ Her talent is undeniable, but her subject matter doesn't attract me at all.
I get a similar yet different feeling from her artwork as that I get from Frida Kahlo's and I just cannot like it.

Colourful personality though! Thanks for the link, the article tells a little more of her and her very arty farty circle.

Yes, I think your inner astro-antenna must be picking up something from her work. :-)

mike ~ OFF TOPIC --
If you haven't already seen it, there's an interesting piece by Larry Schwimmer, with astrology, on Hillary Clinton and Bernie Sanders and the Dem debate airing tomorrow:

Good article, but of course Bernie is the chosen!

We don't know Bernie'e time of birth, so can't say what houses are involved. It would be nice to know his ASC and MC. I wouldn't say that the debate is as astrologically clear-cut as Schwimmer indicates. Hillary's biggest challenge will be the T-Saturn sq MC and Saturn in the first house of image. I would say the sum-total of her transits may make her appear cold and calculated...too rehearsed. Bernie has more positive aspects, but he needs to beware of aggression and impromptu remarks, as Schwimmer stated. Bernie will have an unusual concomitant T-Mars conj N-Mercury, and T-Sun, T-Mercury inconj N-Mars...his N-Mars is in Aries, T-Mars is in Libra...not sure how this will affect him...LOL. Overall, Bernie does have the better aspects and more of them.

I think it would require quite a screw-up for either candidate to make a dent. Most voters have already chosen their pick of the litter.

mike (again) ~ Thanks for your astro pointers. I'm wondering how (or if) they'll approach the horrible events in Paris, France. The story is still unfolding, and feelings of those involved very raw, so they could decide not to give questions on it, I guess.

As you wrote, whatever any of them says, about just about anything, is unlikely to change minds of those already keen on one or t'other, but those as yet undecided might be swayed.