The Sun has recently begun its journey, for this year, through zodiac sign Sagittarius, one of Sagittarius' keywords is exaggeration (courtesy of ruling planet Jupiter). My husband, coincidentally, brought my attention the other day to a photographer who made his name, and his fortune from exaggeration - one W.H. Martin. Husband had been researching for information to add to his list of 19th century and early 20th century photographers (See Lost Gallery HERE), whose names and occasionally addresses often appear at the foot of old cabinet cards. He had searched in connection with "Martin", one half of Gilkey and Martin. 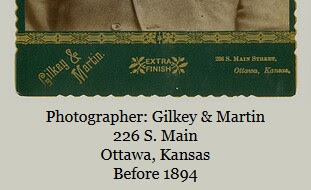 
"It appears that the Martin of “Gilkey and Martin” was actually William H. “Dad” Martin who began the “Tall Tales” postcard business. These were cards depicting giant grasshoppers, rabbits, cabbages or onions, promoting some exaggerated comical tall tale.

Martin took over the photograph studio from Gilkey in 1894 and began making his photo-montage comic cards. He sold the photography studio the next year in 1895, to work full time on his post card business.

He became very wealthy and sold the postcard business in 1912. He then started the National Sign Company."

W.H.Martin was born in 1865 in Illinois. One census return accessible at ancestry.com gives his birth date as "Feb. 1865" - that's the only clue available. I'd hazard a guess that he was born in later February, with Sun in Pisces, ruled by Jupiter (exaggeration) and Neptune(fantasy). He'd likely have had some Sagittarius input too, inspiring him to portray these fantasies of exaggeration.


Tall Tales have an honored place in American culture. From Paul Bunyan and King Kong to the legions of fishermen boasting about "the one that got away," there is something about exaggeration that appeals to our sense of national grandeur. Perhaps it's also our view that in the modern world, anything is possible. Giant hybrid crops? Sure. Rabbits the size of Buicks? Well--maybe.

Exactly this formula proved the key to oversize wealth and success for a photographer named William H. "Dad" Martin. In 1894, he took over a studio in Ottawa, Kansas. Martin began using trick photography in 1908, producing a series of wildly exaggerated post cards. These were so popular that he sold his studio the next year to concentrate on the post card business.

Within three years, Martin's trick photos earned him a fortune. Demand was so strong that his firm reportedly purchased photographic emulsion by the railroad tank car-full (or was that another tall tale?) Martin sold the business in 1912 and founded the National Sign Company. So far as we know, he never again ventured into the darkroom. But during his brief career as a post card photographer, "Dad" Martin tapped into the national psyche with his own imaginative brand of homespun surrealism.

From In the Inbetween


Martin’s technique was one which many photo-montage artists continue to use today: first, each element of the scene was photographed, then elements from multiple photographs were cut and pasted together, and finally the resulting montage was re-photographed, creating a seamless effect. This aesthetic of the “believably unbelievable” remains extremely popular even in modern photo-montage. Martin’s photographs were so well made and in such high demand that many of them were plagiarized and sold under other names.

Clicking on the images will bring up clearer pictures.


Its amazing what a little imagination and the willingness to just, "go for it!" will get ya.. add a bit of "people smarts" in there and vavoom, you're a millionaire. He appears to be the P.T. Barnum of postcards:-)

ops.. I forgot to click on receive replys by email:-)

"A Pair of Hungry Pike" is a little on the gruesome-side...the torn-off leg with blood dribbles. His typical postcards are overblown, whimsical, and inflated, as you indicate; I didn't realize he dipped into the cringe-worthy.

Your post reminds me of The Donald! Much ado about nothing...hot air rising...a puffer. The Donald is a Gemini Sun and I've read that Geminis are prone to inflation of details and facts. I hadn't thought about it until now with this post, but it would make sense, with Sagittarius opposing the Sun and Pisces at the MC 10th house of how that individual is perceived by the community and-or status within the tribe. Trump's style in so many ways typifies politic's propensity toward exaggeration and give-em-what-they-want pomposity.

Not sure what it is within us that desires the tall-tales, but the methodology extends all the way back through history. Mythology is nothing but tall-tales and it continues to the present day. Most folklore is fakelore...LOL. Maybe it's because most of us live such small, narrow, focused lives that we require our boundaries to be expanded, whether in self-proclaimed ego-blimps, or our love for expansive fabrications of our outer world that provide our vicarious needs.

Sonny ~ Yes, good comparison! He was in the right place at the right time with what turned out to have been the right idea. :-)

Good coverage of a really obscure but successful artist. Not many people in the current generation have seen any of his photo-montage works much less heard of him.

mike ~ The cringe-worhiness then must have been a lot more worthy then than now, hardened as we've (or some of us have) become from watching horror movies, video games etc. Maybe he was testing the waters to see whether gruesome would sell. ;-/

Oh heck - The Donald! I keep waiting for him to self-destruct but he's staying just this side of doing so. He has Sagittarius Moon too!

I guess tall tales help stoke our ability to imagine and perhaps to later create something. We begin with fairy stories in childhood, and grow up wanting more of the same but even taller, to help us sleep at night - or to convince us that what we've actually got ain't THAT bad.

anyjazz ~ Thanks. I'd not seen anything similar before. Cartoonists maybe drew similar scenarios even before Mr Martin had tried 'em - but his version took a wee bit more specialised know-how.