The Wall Street Occupation by protesters began on 17 September. US corporate media are giving the protesters minimal, if any, publicity. Unions are now rallying support, and relatively modest numbers, in hundreds up to now, will soon swell to many thousands. The movement is spreading to other US cities too.

Some of the protesters have documented their complaints in photographs accessible at:
WE ARE THE 99%

The protesters' website is at Occupy Wall Street. A "Donate" button is at bar at the top of the page.

Below, a recent letter of support by Noam Chomsky:

Anyone with eyes open knows that the gangsterism of Wall Street -- financial institutions generally -- has caused severe damage to the people of the United States (and the world). And should also know that it has been doing so increasingly for over 30 years, as their power in the economy has radically increased, and with it their political power. That has set in motion a vicious cycle that has concentrated immense wealth, and with it political power, in a tiny sector of the population, a fraction of 1%, while the rest increasingly become what is sometimes called "a precariat" -- seeking to survive in a precarious existence. They also carry out these ugly activities with almost complete impunity -- not only too big to fail, but also "too big to jail."
The courageous and honorable protests underway in Wall Street should serve to bring this calamity to public attention, and to lead to dedicated efforts to overcome it and set the society on a more healthy course. 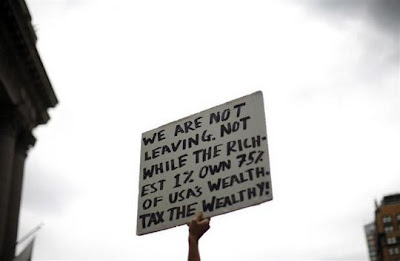 Echoing down the years, from 1936, an excerpt from Carl Sandburg's wonderful long poem: The People, Yes (at pages 277-9):

When was it long ago the murmerings began
and the joined murmerings
became a moving wall
moving with the authority of a great sea
whose Yes and No
stood in an awful script
in a new unheard-of handwriting? 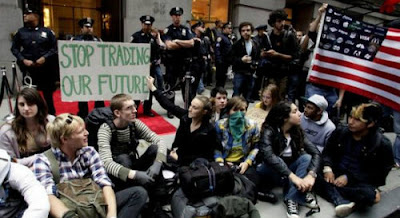 ...............Shall a robber be named a robber when he is one
even though bespoken and anointed he is?
Shall a shame and a crime be mentioned when it is so plainly there,
when day by day it draws toil, blood and hunger,
enough of slow death and personal tragedy to certify
the kings who sit today as entrenched kings
are far too far from their people? 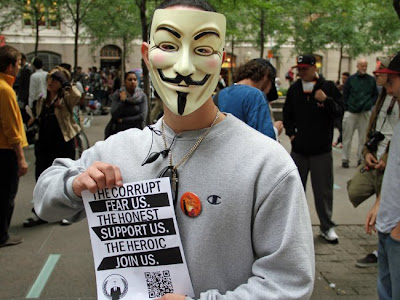 What does justice say?
Or if justice is become an abstraction or a harlot
what does her harder sister, necessity, say?
Their ears are so far from us,
so far from our wants and small belongings
we must trim these kings of our time
into something less than kings.
Of these too it will be written:
these kings shrank."

What is it now the people are beginning
to say - is it this?
And if so
whither away and
where do we go from here? 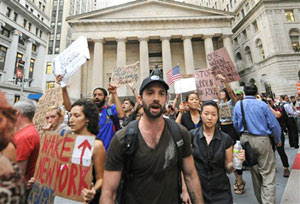 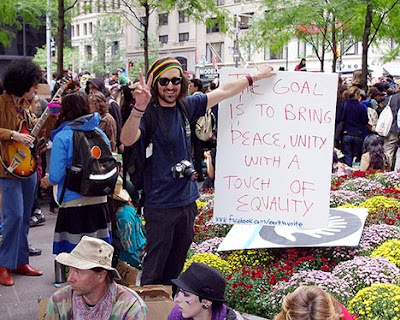 Postcript: Astrologer Robert Phoenix was there. His 29 September piece is a good read on the topic, with some astrology included:
Wall Street Ground Zero, A Personal View, Massive Cardinal T-Square Off In Action 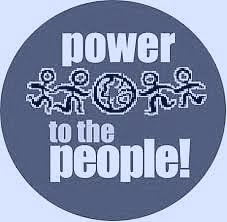 It's beyond repair. The very Bernanke ("Helicopter" as Wall Street calls him for his lifting prowess) DESTROYED AMERICAN SAVINGS!

The run - off - the - mill - American (a large majority) has no other choice but to use some Wall Street-connected vehicle (investment/pension fund) to secure his savings/retirement. Interest rates being close to 0 (yes, ZERO), gives any citizen (even averse to capitalism) no other choice!

Unless he himself starts (and his grandmother) to speculate himself with some commodity - gold or crude oil or natural gas)...

Marx could not prevail, even in China as increasingly evident, because of one basic human defect:

When young, left-wing ideas appeal. Over age "the valet wanders from the left to the right side pocket", for most people anyway. And as "Helicopter Bernanke" now has proven, he even made it a mandatory sort of rule, in the US at least. And Wall Street adors him for that, and even somewhat his boss, Obama.

Wishing the young idealists much of luck, especially as winter will be setting in on their camps. And N.Y. tends to get pretty fresh by X-mas.

It's late in the game, I agree, but it's never TOO late.

I doubt these protesters are looking for Marxism, or anything near to it. They are simply looking for fair play, and some slight tipping of the scales in their direction.

This protest might not achieve anything much, or anything at all, in the end, other than awakening the masses, which would be a very important achievement. This could be the start of something much, much bigger...."prologue to the beginning", a commenter elsewhere called it.

I glance at the foot of this page, at Bob Dylan's lyrics I placed there some time ago, and wonder whether, as "the princes" of Wall Street "keep the view" all along the watchtower, can they hear the wildcat growling, and the riders approching?
;-)

Thank you for the Sandburg excerpts. I hope you don't mind my copying them to my son whom unfortunately is in prison where only the poor have to go. No rich folk in jail [at least where I live]. Solidarity is a really beautiful word and my fondest hope is to see it manifested on behalf of the truly oppressed in my country.

Diane ~~~ Oh, of course not. Carl sandburg's words in my ancient copy of The People, Yes have lifted my spirts many times.
I open it anywhere and always find something of help. I hope the lines will help your son.

Yes, solidarity is a beautiful word, it's the one thing, if it could ever be achieved, that has the power of changing things here.

It's sort of a bit demeaning to older activists to not recognise their presence. It is not true that everyone gets more right wing as they age!

Vanilla Rose ~~~ I agree. I didn't argue with that part of the comment because there was a more important point to address. :-)

I understand that the original idea of the Occupation did come from young protesters, but over the weeks many older people have joined and offered support, including union members, military veterans, and seniors.

I don't agree that we move rightward politically as we age. In my own case it has been the opposite! ;-)