We were in Kansas anymore....(no astro today).

We returned home Monday evening, sooner than originally planned, having decided that it would be best to leave our detour into Oklahoma City as a separate trip for a couple of nights next week. There are so many bits and pieces we want to do in The City, as well as visit the "Occupiers", that it felt like too much of a good thing to tack on to our Kansas trip. It means, too, that we still have something to look forward to (always preferable in my book!)

A few photographs follow (mainly husband's) with notes on our Kansas explorations.

Grain elevators are a common part of the scenery in this part of the US, almost every town has one - some in Kansas are extra-huge. (A grain elevator is a tower containing a bucket elevator, which scoops up, elevates, and then uses gravity to deposit grain in a silo or other storage facility.) Nearly one-fifth of all wheat grown in the United States is grown in Kansas. Photos below show a large elevator in Salina, and a small older one with some new ones in Ellsworth. 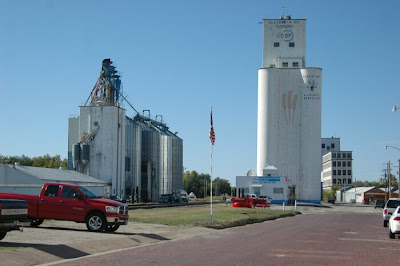 It's amazing what one can find in the most unlikely places. We'd decided on making Salina, Kansas our base, and didn't really expect much in the way of surprises. Salina was my husband's place of birth and hometown for his first 18 years. But nearly all the nearby places we explored were new to him. There are "secrets" hidden everywhere for anyone with time and inclination to search! Map shows the area we explored, around Interstate 35, a busy-busy road we avoided whenever possible in favour of more peaceful highways, and, on occasion, unpaved roads. 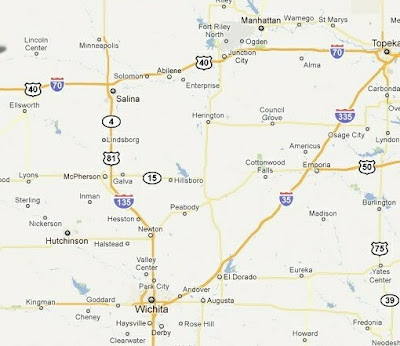 We couldn't leave home until after noon on Wednesday, due to a medical appointment, so broke the journey and made a stopover in Wichita, Kansas. Wichita is called "Air Capital of the World". From the second decade of the 20th century several aircraft corporations made Wichita their home base: Cessna, Learjet, Airbus, Boeing among them. Our main interest in the city was a couple of antique malls, where husband found a goodly haul of old photographs for his collection.

Around 90 miles north of Wichita is Salina, a city of just under 50,000 inhabitants, twice as big as our hometown. Salina still retains that small-town feel, beloved of people in these so-called "fly-over states" (an unfair, quite undeserved, sneer). 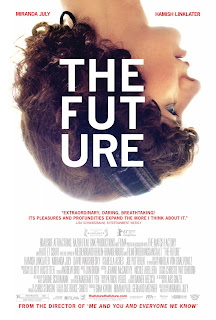 Let's see, what did we do in Salina? A wee bit of shopping in their well-maintained main street. Later, on Saturday evening, we sampled their Arts Cinema - a newish small movie theater in centre town established especially for showing those weird "art films". Such films are often a struggle for me to understand, but they tend to gather acclaim from critics - leaving yours truly well and truly puzzled. Anyway, the film on offer was "The Future", poster has the word split: FUT with URE beneath; I'll remember the film as Foot - Ure....(an ancient disease of the feet?) It wasn't as obscure as some other art films I've had the misfortune to watch, but it was certainly more than a little weird. It wasn't exactly about the future, in the usual sense; it tried a little too hard and self-indulgently to be arty and quirky. (Being a Sun Aquarian, I ought to know all about trying to be, or not to be... quirky!) Still, it was an interesting experience.

We visited nearby Ellsworth, a small town (you can tell it's a real small town when there's music piped into the main street!) We found a surprise in a room above an establishment called the Village Mall (mix of flea-market booths and fancy goods). Upstairs is a rather grand ballroom - the remains of the masonic centre originally housed in the building - those masons are everywhere!! This grand room also houses a lovingly restored pipe organ, in the pic I'm trying to discover how it works. 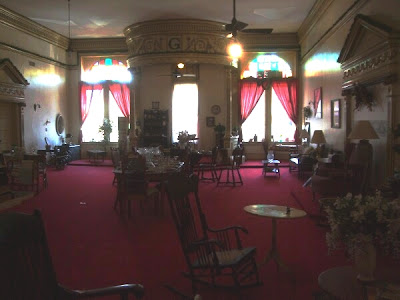 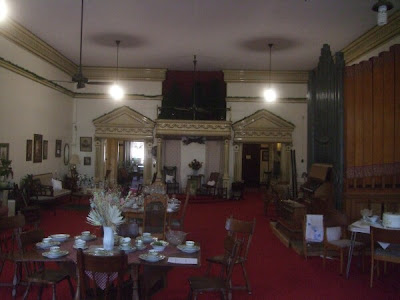 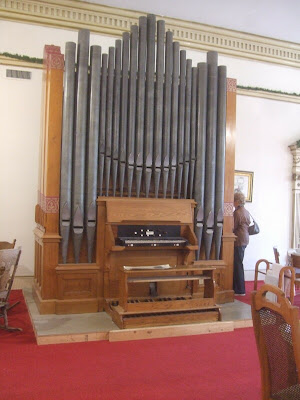 From Ellsworth we took an unpaved road (as directed by a leaflet we'd picked up) and found Mushroom Rocks in a 5 acre area now designated as a State Park, having been donated to the State by the landowner.

The strangely shaped rocks are formed from sandstone from the Dakota Formation, deposited along the edge of a Cretaceous sea about 100 million years ago. Over time, circulating water deposited a limy cement between the sand grains, creating harder bodies of sandstone called concretions.

Concretions, such as the cap of the rocks shown here, are often spherical. The softer sandstone of the stem has eroded more rapidly, creating the mushroom-shaped rocks. 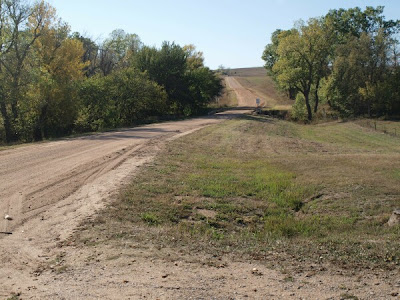 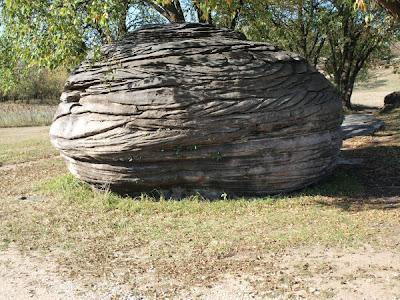 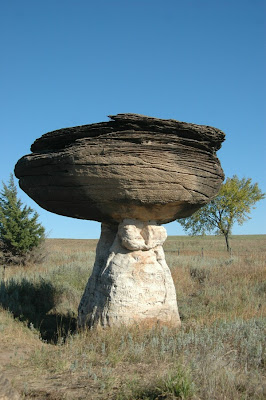 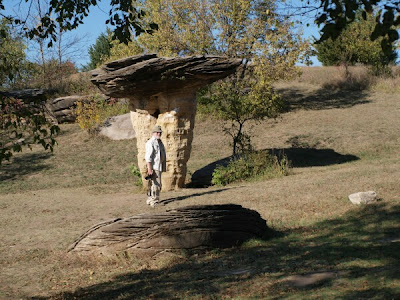 And...Wild Bill Hicock was the town's marshall for a time in the 1870s. The Greyhound Hall of Fame is located in Abilene, the town also has the honour of being Greyhound Capital of the United States.

From Abilene we drove to Manhattan, medium sized town, housing several colleges, but nothing to hold our interest. The countryside around here, Flint Hill country, is hilly, wooded, very pretty - quite unlike the boringly flat-forever Kansas stereotype....Un-Kansas, I called it. Some trees were starting to get their gold on. It's not quite Fall yet, but getting there. A couple of nights with temps below 32 degrees, promised for the coming week, and Fall will be presenting its full glory.

On Sunday we drove the ten miles or so to yet another small town, Lindsborg, known as Little Sweden: the town's original settlers, in 1869, were Swedes. Lindsborg retains, and emphasises, its Swedish roots, for the benefit of passing tourists. A pretty, and on this October Sunday, very peaceful town. Tree-lined residential streets, well-maintained and attractive houses, a pleasant central street, all with an air of mid-20th century. I reckoned that those characters illustrated so beautifully by Norman Rockwell must have lived in a town just like Lindsborg.

Lindsborg's adopted mascot or logo is a carved wooden horse known as the Dala Horse, symbol of the crudely carved horses whittled long ago beside Swedish firesides during horrendously cold winters. A store in town makes and paints replicas of these on-site. Prices were outlandish though, so none came home with us! Large versions of the Dala Horse are scattered around town, all painted in different styles. 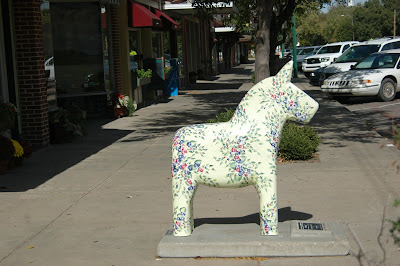 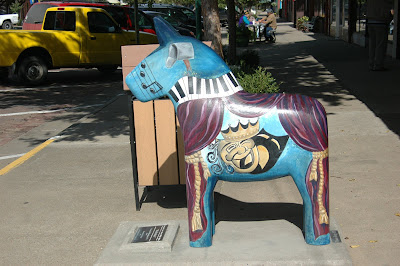 A friendly passer-by offered to take our pic together, with a Dala Horse: 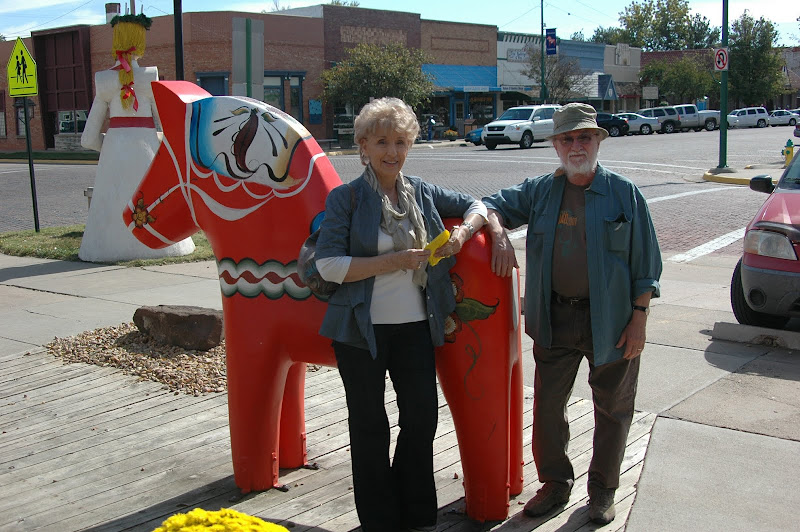 We'd hoped to visit the memorial gallery of artist Birger Sandzén in Lindsborg, but found it was closed for renovations intil 2012.

Those early Swedish settlers had a hard time of it. From directions in a leaflet we'd picked up we headed for something called the Hoglund Dugout: a pit, 6'x12', lined with large chunks of stone, constructed in the summer of 1868 by Gustaf and Maria Hoglund, a young couple from Fernebo, Sweden, as their first home. Their wagon would have been parked over the top of the dugout for protection from the elements - and wild critters. There are no signs leading to the location, one has to watch for a break in the trees, then walk for around 50 feet east to find it. 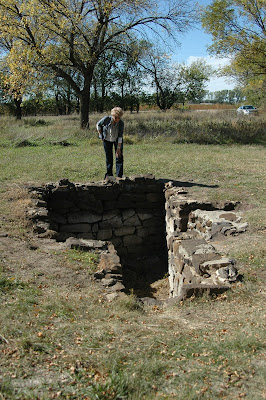 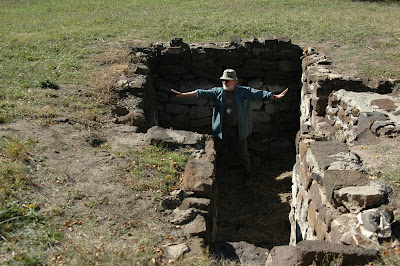 We had a lunchtime snack at The Swedish Crown restaurant , which wasn't nearly as grand as its title, but plain and homely. I sampled a Swedish speciality, meat and potato sausage in a sandwich of toasted marbled rye, garnished with beetroot - very tasty indeed! Husband settled for a plate of grilled fresh veggies.

From Lindsborg we drove up to a popular picnic place, Coronado Heights Park, on a hill named for Francisco Vásquez de Coronado, who explored the area in 1541. Here the result of another of FDR's 1932 Works Progress Administration (WPA) projects can still be seen: a stone castle, stone picnic areas, restrooms and stone front gate. Presumably the WPA workers also cleared the road up to the hilltop, but it has never been paved. Nearer to our Oklahoma home there's evidence of a similar WPA project -a paved road up to the summit of Mount Scott - still not a mountain, by any stretch of the imagination, but much higher than Coronado Heights. 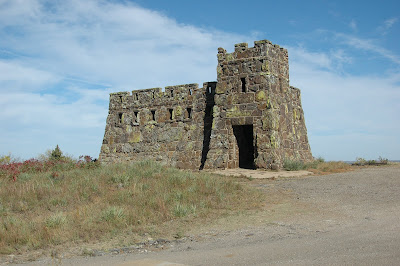 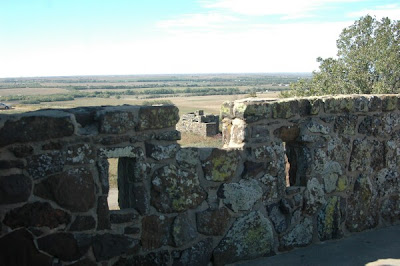 We left Salina on Monday morning around 9.30, arrived home in the evening at 6.30, having stopped for a sandwich in Caldwell, and a look around the junkiest junk shop I've seen, anywhere, ever, in Kingfisher Oklahoma. I found some worthwhile VCR tapes there though, for $1 each, and a Fall/Thanksgiving wreath for our front porch for little more: 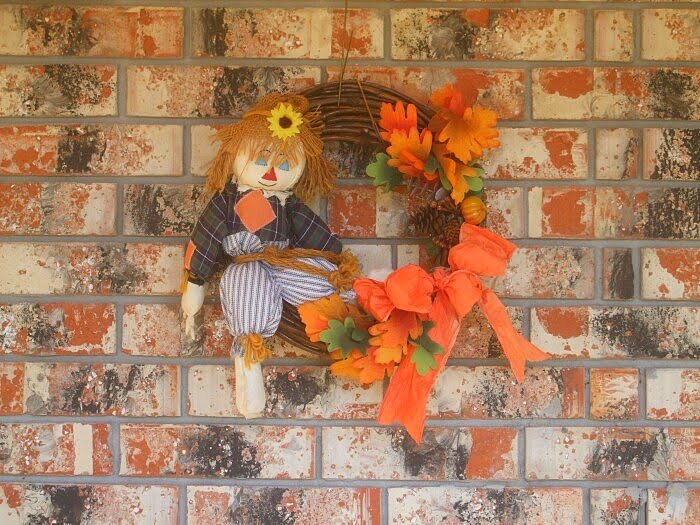 Very interesting post, Twilight. I particularly enjoyed the pics. I'm so glad this one was a success for you both.

Fine recap of our trip. We did have a good time.

Soooo glad nothing untoward happened, T, and that you share so beautifully your travels, oh that ballroom and the pipe organ and that tiny underground house.
The silos reminded me of Saskatchewan, flat flat country, the bread basket of Canada.
XO
WWW

Wisewebwoman ~~ Yes, thanks - it was trouble-free this time, thank goodness, and the weather: just right!
:-)