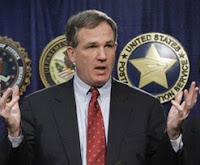 A name remembered from the recent past surfaced again on Wednesday: US Attorney Patrick Fitzgerald.
His name was in the news a lot at the time of the Valerie Plame investigation.
("On October 28, 2005, Fitzgerald brought an indictment for 5 counts of false statements, perjury, and obstruction of justice against Lewis "Scooter" Libby, U.S. Vice President Dick Cheney's Chief of Staff" - Wikipedia)

This week, after the verdict (guilty on 16 counts of corruption) in the trial of Tony Rezko, Chicago wheeler-dealer with whom Barack Obama is said to have some connection, however vague, Fitzgerald is reported as saying

"......citizens of Illinois should feel vindicated by the jury's verdict in the case against political fundraiser Tony Rezko."
After the verdict, Fitzgerald emphasized to the press...
FITZGERALD: We're obviously serious about pursuing corruption.
The top federal prosecutor in Northern Illinois praised the jury for its mostly guilty verdict in the fraud case against Rezko. But there's still the issue of sentencing to hash out and part of that depends on what prosecutors recommend.
(From the on-line Chicago Tribune)


Mr Fitzgerald has the reputation of being relentless in the pursuit of justice, whether investigating terrorists or political corruption. A writer has called him an "Untouchable", in the mould of Eliot Ness .
"The Prosecutor Never Rests", an article by Peter Slevin from 2005 is a good and worthwhile read, giving a flavour of Patrick Fitzgerald's personality.
A few extracts:

"His thoroughness, his relentlessness, his work ethic are legendary," says terrorism expert Daniel Benjamin, a former member of the National Security Council.
Seeing Fitzgerald in action, says Los Angeles lawyer Anthony Bouza, a college classmate, is "like watching a sophisticated machine." Colleagues speak in head-shaking tones of Fitzgerald's skills in taking a case to trial. A Phi Beta Kappa math and economics student at Amherst before earning a Harvard law degree in 1985, he has a gift for solving puzzles and simplifying complexity for a jury."

"The staff of the 9/11 commission called him one of the world's best terrorism prosecutors. He convicted Sheik Omar Abdel Rahman in the 1993 World Trade Center bombing and all four defendants in the embassy bombings, which had left 224 people dead. He extracted a guilty plea from Mafia capo John Gambino and became an authority on bin Laden, whom he indicted in 1998 for a global terrorist conspiracy that included the African bombings"

"People who know Fitzgerald describe him as anything but a stuffed shirt. During a key moment in one New York trial, he slipped a note to his co-counsel, who interrupted questioning to read it to himself. It said, "Is there beer in the fridge?""

"He's no slouch at stagecraft, either. At the trial of a Mafia hit man, the defense argued that a ski mask -- part of what Fitzgerald called a "hit kit" that included surgical gloves, a gun and hollow-point bullets -- was really just a hat. (The defense also said the surgical gloves were for putting ointment on the defendant's ailing dog.) During closing arguments, Fitzgerald startled the jury by rolling up one leg on his lawyerly dark suit.
"These are just shorts, ladies and gentlemen," he said, according to one account. "These are just shorts." " 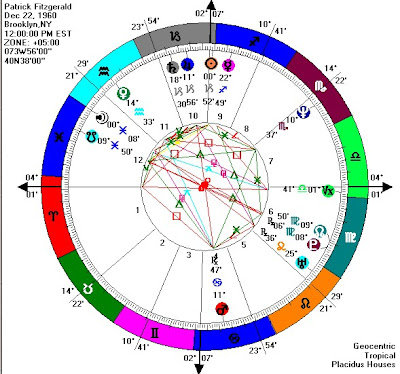 Before I looked for his date of birth I was confident that I'd find Saturn and/or Capricorn very prominent in Fitzgerald's natal chart. I wasn't wrong! Sun, Jupiter and Saturn itself are all sitting in the sign of Capricorn.

Saturn is ruler of Capricorn and both are connected to law, as is Jupiter. Saturn and Capricorn represent the discipline, rules, and structures of law. Jupiter and it's sign Sagittarius represent the judgement and phisosophical aspect of law and justice. There could hardly be a more appropriate lineup of planets in a sign for such a man as this. Astrology in action - again!

Mars at 11 Cancer exactly opposes Jupiter at 11 Capricorn -Seeks out challenges, has to temper a tendency to go over the top at times, but because Saturn is positioned close to Jupiter, such tendencies are held well in check, and emanate in Fitzgerald's case mainly as the excess zeal for which he is famous.

The Moon's position can't be pinpointed without time of birth, but it would lie somewhere between 22 Aquarius and 6 Pisces. I suspect it was in Aquarius, along with his natal Venus. Analysis is the key to his work, and that's a strongly Aquarian trait (in the absence of Virgo personal planets - although Pluto in Virgo is trining Jupiter in Capricorn). I don't see him as a Pisces Moon, but perhaps in his personal life he's a different character (a la Hillary Clinton).

Patrick Fitzgerald could be one of the later embodiments of "The American Dream" - they are becoming quite rare.

"Fitzgerald's parents, born on opposite sides of Ireland's County Clare, met in the United States. They raised their son in Flatbush and guided him to a scholarship at a Jesuit high school. He worked as a school janitor in Brooklyn to make money for college and spent summers opening doors at an upscale co-op building on East 72nd Street in Manhattan. (His father worked at a building on East 75th, just off Madison Avenue.) It is part of Fitzgerald lore that he bit his tongue when rich apartment dwellers talked down to him as "just the doorman."
Fitzgerald says he remembers where he came from and pinches himself when he realizes where he is.
"I'm very indebted to my parents. They were very hardworking, straight, decent people. The values we grew up with were straight-ahead. We didn't grow up in a household where people were anything but direct," Fitzgerald says. "I'm hoping that if you're a straight shooter in the world, that's not that remarkable."

Oh for a presidential candidate such as Patrick Fitzgerald!!
Posted by Twilight at Friday, June 06, 2008

I'm a tremendous admirer of his, T and oddly enough didn't realize he was an (almost) countryman. Clare people are salt of the earth.
I do hope he remains untouchable, I put nothing past the current regime.
XO
WWW