THE WEEK THAT WAS 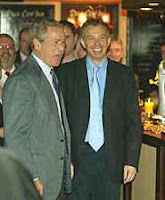 Two minor news items brought a quizzical smile to this blogger's face in the past week. Sometimes it does seem that we live in a world not altogether unlike Terry Pratchett's fantasy Discworld.

NUMBER ONE
""This is the last meeting I will have had with him as prime minister. It's a nostalgic moment for me," Bush told reporters, standing beside Blair after bilateral talks at the gathering of the world's top powers in Germany.
"I'm sorry it's come to be, but that's what happens in life. We'll move on," he added.
Blair is set to stand down on June 27 after a decade in office, the final years of which have been marked by a close alliance with Bush that has angered many in his Labour Party.
Bush and Blair have enjoyed an extraordinary personal chemistry, frequently joking with each other. "

A Taurean Sun (Blair, 6 May) and a Cancer Sun (Bush, 6 July) cookbook-wise would almost always gel together. According to Robert Camp's "Love Cards", which is based on an ancient system which I don't understand, but which seems to work - at least in the matter of relationship compatability - Bush is a King of Diamonds and Blair is 9 of Diamonds. They do have a good compatability rating, #6. A relationship "you could live with long term".

An excellent plan would be for Bush and Blair to wander off into the wide blue yonder together (not forgetting to take Dick Cheyney and Gordon Brown with them!)

A quote from one of Terry Pratchett's books fits nicely here:

His philosophy was a mixture of three famous schools -- the Cynics, the Stoics and the Epicureans -- and summed up all three of them in his famous phrase, "You can't trust any bugger further than you can throw him, and there's nothing you can do about it, so let's have a drink."
--Dydactylos the philosopher (Terry Pratchett in his book "Small Gods")

"A billboard for a salon and medical spa, promoting cosmetic procedures and featuring a woman wearing little more than an off-the-shoulder top, has outraged some Glenview residents who say it sends the wrong message.

"I was shocked," said Regina Thibeau. "I was offended as a woman, angered as a mother and embarrassed as a resident of Glenview."
"It doesn't represent us as people whose beauty emanates from within," Thibeau said. "I'm a mother, a wife, a member of the PTA, and this is an affront to everything I work for and try to instill in my children."

Cathe Russe, a mother of four girls, stands behind Ibgui's right to put up the billboard, but she does not like its message.

"It demonstrates that there's a set of values they support that are the antithesis of my values," Russe said. "I would love to see it removed."

The 10-foot-by-36-foot sign along Willow Road near Patriot Boulevard depicts a model lying on the beach with lines pointing to "problem" areas on her body, such as facial lines and wrinkles, and corresponding "solutions," including Botox. " 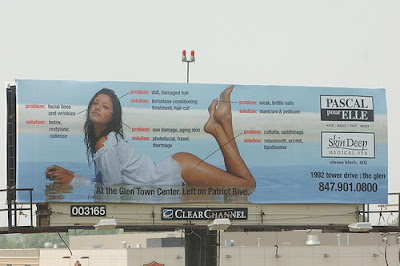 "Instead, people would take pains to tell her that beauty was only skin-deep, as if a man ever fell for an attractive pair of kidneys".(Terry Pratchett, "Maskerade")

"She sighed again. She was familiar with the syndrome. They said they wanted a soulmate and helpmeet but sooner or later the list would include a skin like silk and a chest fit for a herd of cows." --(Terry Pratchett, "Jingo")

I reckon that a wiser approach by these Moms would be to say to their little sweeties, pointing to the offending billboard, "It's life Jemima, but not as we know it!" After all, by the time the kiddiwinkies are at a stage where wrinkles and botox become an issue, the billboards will likely be advertising "Full Face Transplants". Won't THAT be fun!?
Posted by Twilight at Saturday, June 09, 2007