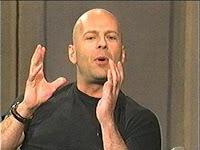 Bruce Willis has always been a favourite star of mine, ever since "Moonlighting", the TV series which made him famous many Moons ago.

When he started making his tough guy "Die Hard" movies I couldn't understand it. I was disappointed. I always realised, even before I knew enough astrology to make a judgement, that if anything he's the exact opposite of the character he portrays in "Die Hard".

I can't disagree with anything Jeff Jawer has written. I'd add that the reason Bruce Willis crossed from light comedy to tough guy stuff may have been merely $$$$. There was a bandwagon of tough guy movies rolling in, and he jumped onto it. I haven't forgiven him yet! I wish he'd stuck with his strength: charismatic humour and coolness - qualities much rarer than tough guy abilities. 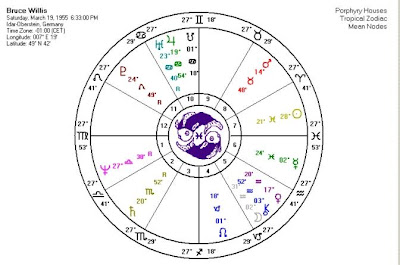 The fairly loose Grand Trine in Water, taking in his Sun, Uranus/Jupiter and Saturn truly could have overcome that opposition between Saturn and Mars. But Saturn is in House 2, looking after worldly possessions and his money, so professional necessity came first.

Quote from USA Weekend.com
"Willis makes no apologies for his frequent turns in mindless, violent action pics. Those movies, he says, afford him the opportunity to "work on [low-budget] films I have a passion for," such as his new movie.
And while he isn't ready to forsake action movies, Willis does believe in taking stock of one's life choices on a daily basis. "I've lost a couple of friends in freak accidents," he explains. "It makes you realize how fragile life is, how quickly it can be taken away. I think about my death at least once a day. I say to myself, 'Am I living my life? Am I enjoying my life today?' Because this is not a rehearsal. This is it."

Hazarding a guess, I'd say that given a choice, where making money didn't come into it, Bruce would prefer lighter roles, and those rather more weird sci-fi ones he's done, such as 'Sixth Sense', 'Fifth Element', 'Twelve Monkeys', which play to his Aquarian Moon.

Here's a video from YouTube which displays something of the Bruce I like best:
Posted by Twilight at Monday, June 18, 2007