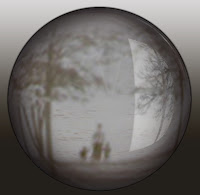 I have never had a one-to-one consultation with an astrologer, in person. I've just never been in the right place at the right time, and astrologers have been thin on the ground in places where I've lived. I've visited tarot readers on a few occasions over the years, and had my hand read by fortune tellers. I've experimented by attending spritualist meetings, even dabbled in magic. These mysteries have intrigued me for as long as I can remember - 8th house Sun at work, perhaps.

The search for evidence and answers though has often been disappointing. Astrology has been by far the most consistent in providing me with evidence that "something is going on", especially since I've been able to use astrology software and learn some of the finer points.

Many people consider that astrology is in the same category as fortune telling, tarot, magic and mediums. I don't. I have found plenty of evidence to satisfy me that astrology "works" a lot of the time. Any evidence in other areas of mystery though, has been scant, to say the least. There have been a few scattered incidents over the years, just sufficient that I can't quite close the door, and my mind, on the idea that "there is something".

A tarot reader (who must also have been a medium), in Devonshire, UK, once told me that someone was speaking to her, and that he had a peculiar way of using the expression "it was real" in his conversation (meaning it was very good). I immediately recognised this person. He wasn't anyone close, simply an acquaintance, but his idiosyncratic way of using the word "real" always used to amuse me. He had died in a car accident some years before. I hadn't even thought about this person for years, but was very surprised to recognise him immediately from the reader's description.

Many years ago, I persuaded my late partner to come along to a spirtualist meeting with me. The speaker there pointed to him during the meeting and said "Do you know Peter, wearing RAF uniform?" He gasped "Yes". "Well, he is saluting you", the speaker said. I knew already that my late partner had had a close friend called Peter, in his youth, during WW2,in the Royal Airforce. Their plane was shot down over France and they escaped together. Sadly, Peter's wife had been unfaithful while he was away in the forces, and he commited suicide just after the war ended.

Many Moons ago, when I was still a young teenager, a fortune-teller told my mother that I would marry someone "from over the sea" and end my days abroad. That wouldn't sound too unusual nowadays, but in the 1950s before air travel was common and computers unheard of, it was extraordinary! Anyway, the prediction was vindicated three times - the second time wasn't a marriage, but a 33 year relationship. # 1 husband from Italy. # 2 from Northern Ireland. # 3 - HeWhoKnows - American! And here I am, ending my days (hopefully not too quickly) abroad. I'm pretty sure that this wasn't what's known as "a self-fulfilling prophecy" - although I did have ideas of retiring to Spain. I never could have envisioned what actually happened!

A fortune teller told me, back around 1973, that there would be 3 men in my life. I was already aware of two - an ex-husband and a current partner. This prediction worried me for a long time. I took it as a sign that I'd somehow lose my partner. I did, but not for another 30 years! Then # 3 appeared - HWK.

I can find no logical explanation for any of these instances. Sometimes I've assumed that mind-reading may be involved when mediums or readers come up with their pronouncements. In most of the examples I've mentioned, this seems highly unlikely.

Having experimented, I'm no longer as keen to seek information about the future from others. Astrology offers more than enough insight, with perhaps the odd peek at my own tarot cards. It's not much use trying to convince someone else, bent on trying to see into the future, that many methods can prove disappointing, not very useful, sometimes cause stress, and can be expensive. Seekers will seek. Having sought, I'd guess that many will eventually come to the same conclusions as me.

Strange co-incidences such as those I've mentioned may be manifestations of some magical mystery, but the mystery is far beyond anything we are at present capable of understanding. The temptation to put a, perhaps mistaken, label on these experiences could well lead to them doing more harm than good.

(Illustration "Prediction" from www.berrizbeitia-design.com)
Posted by Twilight at Wednesday, June 13, 2007