Solstice greetings to everyone, from Waco, Texas. And hello to summer!

Over fish and chips at Denny's last night, I mentioned to HeWhoKnows that it was Solstice eve. He wondered what we should do in honour of the sunrise.

"Dance naked across the old suspension bridge, perhaps?" He suggested.

"You can, I'll watch, the 'skeeters are just waiting for a banquet of my tender flesh".

He chickened out, of course.

We had set off later than planned yesterday, in order to stay behind a band of severe storms. Dawdling via quieter roads, avoiding the Interstate as much as possible, we decided to stay over at Waco, have a look around, and see the famous old suspension bridge over the Brazos River. The bridge was completed in 1870. In its day it was a great achievement, and enabled enormous herds of cattle to cross the wide river safely during cattle drives. A newer bridge now stands nearby to carry traffic, the old, wooden floored, bridge is for pedstrians only.

The Brazos River is "well up", flowing too fast for the ducks, and covering picnic tables etc, after storms and unusually heavy rain - for Texas. 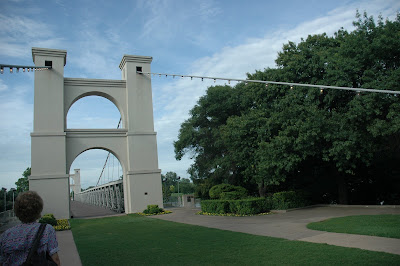 Nowadays, sadly, Waco is mostly remembered for a dreadful massacre in 1993, involving members of a religious sect. More than 80 people, including 21 childen died.