Think Brexit is a Nightmare? It's a walk in the park compared with Battle of Hastings and The Harrying of the North. 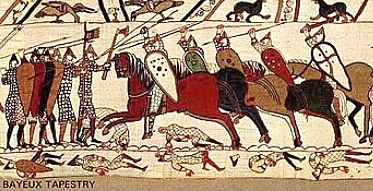 Tomorrow, 14 October, in 1066 saw the Battle of Hastings, and Norman Conquest of England. It took place on Senlac Hill, seven miles from Hastings, on England's south coast. The forces of William the Conqueror defeated the English army and killed King Harold II. The full story of the Norman Conquest, and lead-up to it is told at Wikipedia, HERE. 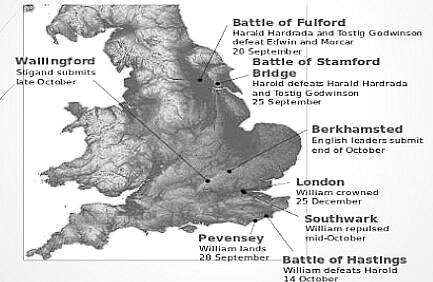 The Norman Conquest was a pivotal event in English history. It largely removed the native ruling class, replacing it with a foreign, French-speaking monarchy, aristocracy, and clerical hierarchy.


Battles didn't end in 1066. What is known as "The Harrying of the North" followed:


The Harrying of the North was a series of campaigns waged by William the Conqueror in the winter of 1069–70 to subjugate northern England, where the presence of the last Wessex claimant, Edgar Atheling, had encouraged Anglo-Danish rebellions. William paid the Danes to go home, but the remaining rebels refused to meet him in battle, and he decided to starve them out by laying waste to the northern shires, especially the city of York, before installing a Norman aristocracy throughout the region.

[NOTE: One of my ancestors, on my father's mother's side, could well have originated from one such individual, his name does derive from the French - though whether he was an "aristocrat" or just some well-behaved servant elevated to overseeing a parcel of land and its inhabitants in the wild north is another matter!]


Contemporary chronicles vividly record the savagery of the campaign, the huge scale of the destruction and the widespread famine caused by looting, burning and slaughtering. Some present-day scholars have labelled the campaigns as genocide although others doubt whether William could have assembled enough troops to inflict so much damage and have concluded that the records may have been exaggerated or misinterpreted. 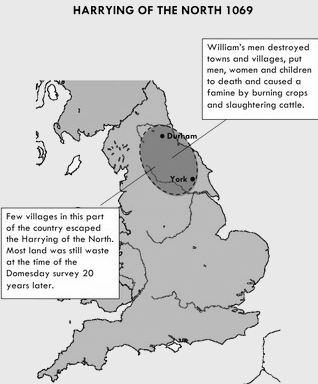 Pupils in English schools have the year 1066 engraved on their hearts (or they did in my school days) - it's often one of few dates to be so well remembered. A couple of 20th century humourists, W.C. Sellar and R.J. Yeatman wrote a series under the title 1066 and All That, for the famous British Punch magazine. The series, later developed into a play and a book, is a parody of English history. I have a copy of the book on my shelf, so immediately reached for it when faced with Wikipedia's reminder of the date of the Battle of Hastings.

I'll not go into much detail of the book's content, it truly is an acquired taste, to the uninitiated, those unused to this type of humour, it'd sound just silly. You really had to be there (in England over many years) to "get it". I did notice something worth mentioning here though, with a possible astrological link. 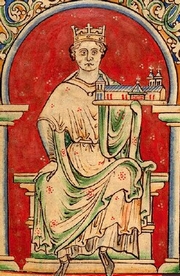 Skipping through the years from 1066 to what's known as the Tudor Age (or Middle Ages), we come to King John, noted in the book as "An Awful King". During his reign, in 1215, came the Magna Carta, which I guess could be likened to the US Constitution and Bill of Rights.

1066 and All That parodies the intent of the Magna Carta, which King John was compelled to sign by the Barons (members of the nobility/aristocracy, mainly of French descent).
The Magna Carta, as described in the book, said:


1. That no one was to be put to death, save for some reason - (except the Common People).

2. That everyone should be free - (except the Common People).

3. That everything should be of the same weight and measure throughout the Realm - (except the Common People).

4. That the courts should be stationary, instead of following a very tiresome medieval official known as the King's Person all over the country.

5. That no person should be fined to his utter ruin - (Except the King's Person).

6. That the Barons should not be tried except by a special jury of other Barons who would understand.

Magna Carta was therefore the chief cause of Democracy in England, and thus A Good Thing for everyone (except the Common People).

The Common People in most countries, even nowadays, are still in the category "except for"! And Number 6 sounds eerily familiar too. Things do change, but remain much the same.....as the French are wont to say, but rather more prettily - "plus ça change, plus c'est la même chose."


An astrological note:
Does anything in astrology link to Magna Carta? Google searches some years ago uncovered something of interest relating to Jupiter/Uranus and Saturn/Uranus cycles, but the link I had has become defunct - as Monty Python would say "It's an ex-link!" Here are the details from that ex-link that I used in a post on this subject some years ago:

In astrology the development of human rights is often associated with Uranus and Aquarius, and the periods of history that coincide with the rise in awareness of human rights and human wrongs are usually linked with the Jupiter-Uranus and Saturn-Uranus cycles. But does this stand up to scrutiny?

This article examines landmark events in human rights in the UK, the USA and France, as well as major political thinkers/philosophers whose work influenced the way human rights were thought about and practiced, and looks for correlations between these and the Jupiter-Uranus and Saturn-Uranus cycles.

Landmark events
These are said to be some of the major landmarks in the development of the current Western thinking on and practice of human rights :

Other examples were included too, but I have not kept a note of them.

The astrological observations on Jupiter-Uranus and Saturn-Uranus seem to hold true. Awareness of human rights, and the relationship between the establishment and the people, does seem to correlate with the cycles of these planets. How, or if, the fact that Saturn and Uranus are currently in trine aspect, between early degrees of Taurus and Capricorn (Earth signs), relates to the above remains to be seen. Guess what might soon become a "landmark event", major or minor, regarding human rights, and relationship between the establishment and the people!

A blogging friend in the UK has kindly alerted me to a post from Sunday 14 October at Broad Oak Magazine (see link in sidebar). This might be considered a companion post to my own, but focusing mainly on the Battle of Stamford Bridge. It is well worth slipping across to read.
I lived most of my younger years around a half hour's drive from Stamford Bridge, one branch of my family hails from that area - I know it well. :)

The direct link to "1066 - still Free or still conquered?" by Sackerson.