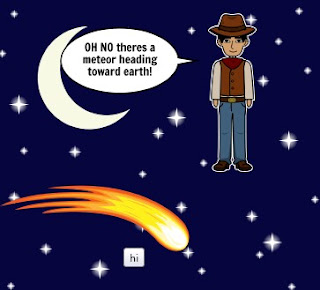 Let us, today, forget all about the Supreme Court, the travesties of Kavanaugh, Susan Collins, et al for a mo and imagine something else, equally horrendous - something such as this, which appeared at Quora a while back:

If a meteor was spotted heading towards Earth, one week before collision, what would happen in that one week?


Someone whose name has appeared before in these blog pages had an answer:
From Ian Lang, Leading Technician, with his kind (blanket) permission:

"Donald Trump would declare it fake news on Monday, blame the Mexicans on Wednesday, and go on a molesting rampage on Saturday.

Certain writers on Quora would blame Brexit. And then disable comments so that we couldn’t point out that it’s got nothing to do with Brexit.

By Monday afternoon somebody would accuse it of “cultural appropriation”.

Flat Earthers would be insufferable. They’d be going about saying “even you globeheads won’t be able to claim it’s round when that hits!”

If it was heading to hit the UK the politicos would be screaming about Brex-hit and castigating Theresa May for not doing a deal with it.

If it’s found to be heading smack for the Brazilian Rainforest every Greenie in the world will be rocking up to NASA’s doorstep demanding that they do something about it.

The average British man or woman would go down the pub. About four seconds before impact, they’d be draining the last pint.

UK Railway operators would use it as an excuse for the trains being late. Japanese railway operators would do nothing visible until it hits, and then thirty-eight seconds later (assuming total destruction of their railway system) would have the trains running again and be apologising profusely for the 8:15 being twelve seconds delayed in departing.

In North Korea, nothing unusual would happen all week, because nobody will be told anything about it.

Sales of patio heaters, umbrellas, and Spam will go through the roof.

The UK government will advise us to paint our windows white and take off our doors four minutes before the meteor hits.

We’ll all ignore this because, as I mentioned before, we’ll all be down the pub finishing our pints. And probably watching football.

Extinction Level Event? Balls to that. We’re taking our beer with us."

Great answer! I'd be down the pub with him.

RJ Adams ~ Me too - if we had a flippin' pub in these parts that is!

Don't tell me they forgot about the Rapture People and the Sweet Jesus Boyz? Lots of last minute conversions would be happening in rivers around us.

Pestilence (and Doom) being wreaked upon the earth for all our sins would be trumpeted by Fox. We brought it on ourselves for not declaring 45 the Saviour and Son of God.

Wisewebwoman ~ True! There'd be lots of that kind of thing around here too! Mind you they'd be rather short of water in the Red River - it dribbles rather than flows these days.