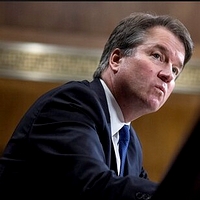 A quick look at the astrological side of Brett Kavanaugh. I did, initially, take a passing glance at Brett Kavanaugh's natal chart - a 12 noon version as time of birth, unfortunately, remains unknown. My first, and mistaken, thought before emergence of the current spate of investigations and accusations, on seeing an Aquarius trio of planets including natal Sun, was that perhaps Kavanaugh would be another Justice along the same lines as Chief Justice John Roberts, who by the way has a birthday on the same day as my own, 27 January - different year. I've since come to different conclusions. 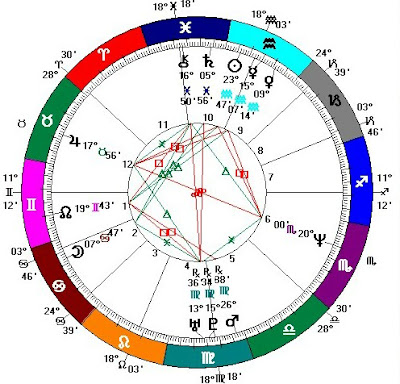 Looking more closely at Kavanaugh's chart now, digging a little deeper into those Aquarius planets I noted that his natal Sun, at 23 Aquarius, is conjunct Fixed Star Deneb Algedi. How is that interpreted? 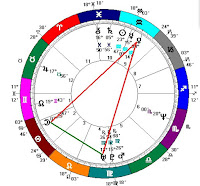 I also noted there could be (depending on exact Moon position) a Yod (Finger of Fate), a formation linking a possible sextile between Moon in Cancer and a conjunction of Uranus and Pluto in Virgo, to two quincunx (150 degree) aspects to Mercury and/or Venus in Aquarius. I'd see this formation, if it does exist, depending on time of birth, as an indication of an overly sensitive Cancer Moon being modified (corrupted even) by the eccentricity of Uranus and the potential darkness of Pluto, then emerging as inborn attitudes via natal Mercury and Venus.

Here's a good, and recent, rundown of Kavanaugh's natal chart by an astrologer I've admired since my first blogging days - Lynn Hayes, who now writes at Astrodynamics.

The astrology of Brett Kavanaugh

All I know is this man should never be on ANY BENCH, adjudicating anyone. He is seriously flawed and has no insight or empathy.

Wisewebwoman ~ Yes, he's sadly lacking on several fronts. As an old boss of mine used to describe such a person, "He's not of the right calibre!"

Thanks for the link Twilight. It will be interesting to see how this plays out this week with Venus in Scorpio Rx getting ready to square Mars and Black Moon Lilith. 😳

Lynn Hayes ~ Hey Lynn! Yes, indeed. We've been out all day, just come home and I see he's been sworn in. :(

I'm sure there'll be continued outcries, but we're stuck with him now for probably decades. Very disheartening. Maybe the stars and planets will come to our aid - that's all we have left now - and voting out as many Republicans as possible in the November mid-term elections.